Cold Fire is a timeless chronicle of the human facing the dread and magic of its own materiality. This book-length poem, written in a voice as piercing and tentative as the elements themselves and translated into English by Katherine Silver, is an intimate and irreducible exploration of our vulnerability, solitude, plunder, and death, and posits the wind, with its omnipresent voice and its versatile metaphoric essence, as the fundamental source of energy, renovation, and destruction. According to Eliot Weinberger, this acclaimed Chilean poet “demonstrates that to think about the wind is to think about everything.”

Cold Fire is now out via World Poetry Books.

I climb the hill/ I see the lake/ and in the lake the mountains/ the dead trunks/ the living and tongueless tale/ the extinguished dream/ the clouds that pass/ and sing/ and boast/ and cry.

Fog/ blurred horizon/ scattered light/ time/ departed forest/ presence and absence in water/ because the world is other/ always an other/ a fragment of your evil/ or elusive beauty/ and I/ confronting your picture held in the face of the lake/ no longer know/ or will know/ who is the hooded one in charge/ what does he do or undo/ and why.

The wind drifts down

and is only absence

as if without wanting

it has grasped uncompromising the tremulous

gauge of the world.

lowers us to the source

where everything is but watery and fallow darkness

are nothing but a distant presence.

Might the condor be a floating witness in the windgusts?

Might it truly escape the iridescent tongues of evil?

Might it tell what it saw to the still intact mountainsides?

To the north that strengthens and whistles and bites the ear?

To the vain man who never learns his lesson?

To the scattered skeletons who try to return to the earth?

Can woman/ man/ be quiet and receive?

Can woman/ man/ refrain from sullying

the airborne muteness of the pampas?

Of the eternal forest?

Can silence be the only actor in the vastness?

And farther away/ there where the lunar craters establish a known address/ can it/ can the storm wrap thunder in the arena of the lone one?

How many are the dreams?

The buried who retreat?

How many who nod off under the dust?

Under the immutable light?

How many who breathe under the red ash?

How many under the bluegreen flame?

Who is able to make them shine?

Who to make them speak?

Well, I say nobody/ nobody is known to have managed.

The wind whistles and groans and roars/ and all flies and is guttural.

A dark hand this gale.

The bones a fragment/ the horse skulls/ the hides/ the lust for power.

Rough texture a fragment/ the written word/ the small print between rocks/ sculpted silences for the deceased/ the dead ones/ the vanished greenery/ those that flutter among the living/ pasturelands in flames/ those that burn/ that seal the track with a branding iron/ trunks that shout/ that speak/ that corrode thought.

A fragment that points with a hand/ with an axe/ an ember/ a large candle on the bald prairie/ in the spooked/ furious ledger/ trapped between winds and false bluster/ in the waters of whatever’s there.

A fragment of a whole/ of a nothing/ we breathe now/ we breathe tomorrow/ hmmm………………/ memory is wearisome/ the finger is wise/ and today/ oblivion is lack of/ because the air is the wind/ transparency/ strife/ a small piece of something/ hmmm………………/ and hangs/ hangs from those crosses the wind gave birth to/ a seed/ a being/ an illusion/ hmmm……………… of life/ of life today contained/ tomorrow nomadic/ but always and still between/ between betweens/ between the betweens of war forever more.

Take a look/ time is corrupt/ disrupts/ envelops the air in the cough of a wandering bull/ and charges and attacks and embraces lands/ men/ forests/ birds/ waters/ and of course/ punctures/ punctures this petrified silence/ into the asthmatic ayyayyays of today/ only highwaters/ friends of the wind/ aphonia in the very pith of natural death.

runs/ runs/ runs a race outrunning the stormcloud/ and damn/ the heavens are so vast I no longer know/ because where/ where are they/ where do they go/ because I know/ I know that flies can’t enter a closed mouth/ and that female ducks endure/ and so do she-herons/ condors/ ewes/ cows/ goats/ huemulas/ pheasants and hares/ and okay/ so do a few boys and men/ such grand girls and women/ and the houses/ and everything and everyone close their mouths/ so the wind won’t enter/ won’t attack/ so it won’t flay us/ so it won’t uproot us/ so it won’t blow us away/ even if it does swoop up the leaves/ and make the solid waters flinch/ flinch/ and stoke the flames/ and scratch the peaks of the Andes.

I don’t want it climbing the haunches

mounted on the endless wind

I don’t want it heating surfaces

I don’t want it dancing

without pleasure/ or love/ or meat on the hot grill.

The hands of others.

A skeleton lies naked on the pampas.

The hill sleeps and the dead man sleeps and asleep are the burned-out bodies.

Out in the world two ñire trees still chat like two old men.

Two babble on the butchered earth.

when the retreat of the waters.

We always bleed through our wounds. 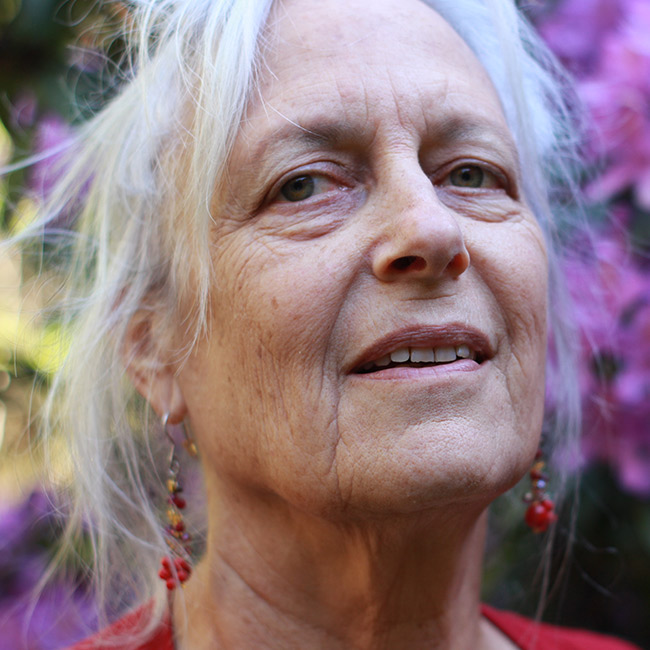 Verónica Zondek is one of Chile’s most renowned and prolific poets, translators, and editors. She has published many books of poetry, and has collaborated extensively with musicians, actors, photographers, dancers, and visual and performance artists. She published a critical edition of the poetry of Nobel Prize-winning poet Gabriela Mistral. Her translations include the works of Gottfried Benn, Derek Walcott, June Jordan, Anne Carson, Emily Dickinson, Anne Sexton, and Gertrude Stein. She lives in Valdivia, Chile.

Katherine Silver is an award-winning literary translator. Her most recent and forthcoming publications include works by María Sonia Cristoff, Daniel Sada, César Aira, Julio Cortázar, Juan Carlos Onetti, and Julio Ramón Ribeyro. She is the former director of the Banff International Literary Translation Centre (BILTC), and the author of Echo Under Story (What Books Press 2019). She does volunteer interpreting for asylum seekers.

I have a special relationship, as a translator, with the work of Andrés Felipe Solano. My first translation ever published was a piece of his titled “The Nameless Saints,”…