Skip to content
BOOK REVIEWS
El resplandor de la derrota by Miguel Castillo
By María del Mar Escobedo
The first time I read Miguel Castillo’s work, I was surprised by the strength of his tenderness. The taste of an old village, a forgotten world, a distant and serene childhood. I was surprised by his constructions of experiences, half-lived and half-imagined, that reveal a crack within his readers; a crack we often leave in the dark, but whose stories fill with a warm and golden light, like kintsugi bowls.
Fiction 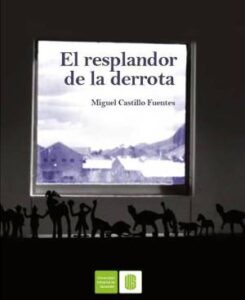 The first time I read Miguel Castillo’s work, I was surprised by the strength of his tenderness. The taste of an old village, a forgotten world, a distant and serene childhood. I was surprised by his constructions of experiences, half-lived and half-imagined, that reveal a crack within his readers; a crack we often leave in the dark, but whose stories fill with a warm and golden light, like kintsugi bowls.

Miguel Castillo was born in San Gil in 1985. He has a degree in Spanish and Literature, has been a finalist in multiple literary contests, a director of multiple workshops, a teacher-trainer, and a promoter of reading and writing. He has published the books Peces para un acuario (2010), Tres hombres solos (2013), and El resplandor de la derrota (2018). Miguel Castillo is, above all, a writer. An author who inhabits his reality with a ghost-like consciousness, with a soul much older than its young host that traverses the streets, paths, and days of Colombian reality with its imagination infected by the concerns of Faulkner, the symbolism of Melville, and the misfortune of Hemingway. His narrations take the form of the modern story, heir to the urban subtlety of the North American literature of the twentieth century and to the extraordinary of the everyday present in the Latin American Boom. This temperate style inherited from Fonesca, the playful beauty of Cortázar, and the simple yet brutal stories of Ribeyro finds a fertile and immense field in Castillo’s imagination.

El resplandor de la derrota is a book composed of eight stories, all different in their setting and plot, but all similar in their protagonists: men and women defeated by the weight of their days. The book was the winner of the “Convocatoria de Estímulos de Cultura de la ciudad de Bucaramanga 2018, Bucaramanga cree en tu talento” and was published in August of the same year. In it, Castillo sets out on a journey of passions, illusions, customs, and bodies as battlefields. This book explores four forms of defeat: love, fantasy, boredom, and cruelty.

The first two stories, “Papá en la sala” and “Amor,” explore defeats of the heart. The first tells the story of a young man who rejects the offer to live with his father. As a result, the father moves to his son’s apartment without warning, like a ghost that only sleeps, eats, and watches Steven Seagal movies on the living room TV. Meanwhile, the son fantasizes about a lost love from a long time ago. The second story tells the tale of a boy in love with a girl who attends the same church, though this love is not reciprocated by her. In these short tales, we attend a terrible confrontation: the burning heat of love against heartbreak. The brilliance of love and faith, of memory and nostalgia, fades when we discover that love is an illusion, a spell that has little to do with being loved and a lot to do with the lover’s desire.

“El último verano” and “Los seguidores de la ley” are the two clearly fantastic stories of this book. In the first, the ghost of Hemingway suffers from writer’s block and, in his search for inspiration, ends up participating in a Hemingway lookalike contest. The second tells the story of a group of soccer fans who found a club in support of referees. Both stories explore, by way of nostalgic humor, the figure of the loser by omission, the one who is already out of the game. The anguish of the suicide victim is the distress of his ghost: seeing his work transformed into a cult, his life reduced to trivia, his image converted into a costume. The referee never loses, but nor does he win.

The defeat of these characters is an assumed and sober position, in which all strength comes from resignation, from acceptance of loss, but also from awareness of a certain beauty that dignifies them.

“Autobús” and “Algo más bello que el viento” are stories of indifference and boredom. The first narrates a romantic breakup that happens on a bus. The second recounts the story of a prostitute, recently arrived in town, that seduces all the men and soon takes their money, which causes indignation and fury amongst the women.

These tales brutally expose a terrible vulnerability: the pain of the unjust end, of unreciprocated excitement. They explore love overcome by abandonment, the intimate made public, the special made generic, the pain made shameful. They explore the relationship between desire and boredom, between beauty and violence, between the excitement of possession and the voracity of hunger.

“Un llano extenso con una boca en la tierra” and “El ruido del vacío” are explicitly violent stories. They explore the destruction of ideas, of love, of learning, and of empathy; the destruction of all things delicate, tender, and fragile by way of cruelty. The first narrates the life of a teacher who has been assigned to a school in a war zone. The last story is the most shocking of all. Shocking for its violence, shocking for its pain, and shocking for its irremediability. The noise of emptiness is the silence that remains when one child destroys the soul of another.

This book is, for me, a companion. A refuge. A friend who has lived, who has suffered, who loves me, who is there to console me. It does not give me answers, it does not ease anything, but it comforts me. With the heat of its tenderness, it illuminates all my defeats. And in the brilliance of its pages there is not just fascination, nostalgia, and immobility; in the tenderness of the light, in the acceptance of defeat, there is hope for change. Like the movie at the end of the story, in which Steven Seagal wakes from a coma after seven years, the reader finishes the book and wakes from lethargy and anguish, shakes off the dirt from their wounds, and sits waiting for the next battle to come.