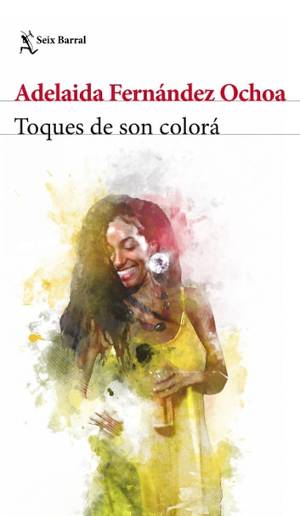 Adelaida Fernández Ochoa (1957) makes no mistake when she begins Toques de son colorá with the words “Digamos que soy la rumba” (“Let’s say I’m the rumba”). In her new novel, whose playful prose is teeming with rhetorical complexities and poetic excesses, she is not only the rumba itself but also the singing, the drum skin, the rhythm, and the fire that form it. With the sound of the clave and the bongo, Fernández Ochoa calls us to witness a re-creation myth for Cali, Colombia, one that belongs to African gods—who are now Latin American gods, too. The story is told in the voice of a narrator-god-Orisha who transforms into the salsa music that protectively surrounds Valle del Cauca. From there, the pages of Toques de son colorá move like dancers’ entranced bodies in the dark of night and the spinning of vinyl records on a turntable.
As the clave performs its liturgy, the Afro-Cuban rumba is transfigured into the Cali rumba over the course of a novel that moves quickly, breathlessly, all while telling the story of the birth and destruction of its characters—dancers, singers, music lovers, and folkloric figures—in the one and only fiesta that is life. Fernández Ochoa accomplishes this through the voice of a new Dionysus, an Orisha raconteur who knows nothing of straitlaced, linear narratives and who has exchanged his prophetic gifts for the gift of dance.

This narrator is none other than Changó, nicknamed the Gran putas (Biggest Badass) by Zapata Olivella, his voice brimming with musical ornaments and arrangements. Only this time, the story is not about the Black diaspora but rather about Rosa, a woman who is a formidable, electrifying dancer and whose life is in perpetual, irreversible motion. Hers is the story of an epiphany, the portrait of a muse’s dance that both inspires and serves as a ritual of forgetting.

Reading Toques de son colorá is like sitting in on a conversation among music lovers of a certain age, accompanied by drinks and plumes of smoke. The stories come and go between dancers from the city of Buenaventura and the Barrio Obrero neighborhood, and among unexpected melodies and rumbas in New York. The fragmented structure is chaotic but emphatic, and the characters’ lives follow an improvised drum rhythm that travels through time, inviting the reader into a dizzying, pounding world.

In Toques de son colorá, Fernández Ochoa’s aim is not, however, to simply portray salsa as a god capable of possessing and inspiring, but rather to explore the experience of the dance, of being-a-woman-not-an-afterthought in a world dominated by men—men who are singers, musicians, dancers, and abusers. The characters are sketched with a light touch, like sways to the music on the dancefloor. Admittedly, their storylines are weak, but the final drawing is strikingly disquieting: it portrays the way salsa music and dance are passed from generation to generation in an otherworldly space inhabited by the old, the dead, and the unborn.

At the same time, Toques de son colorá visits some familiar places. In it we find traces of Caicedo’s ¡Qué viva la música! and Garay’s La nostalgia del melómano, as precedents. There is no shortage of books that deal with salsa, nightlife, and decadence, but Toques de son colorá—with its melodic prose, backdrop of Yoruba genealogy, and travels to the past according to local lore—is a tour de force when it comes to both the history of Colombia’s southern region and contemporary Colombian literature itself. The novel is, undoubtedly, a window into the cult of the clave, the tragedy of life, and the timbales.