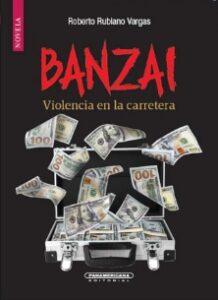 Four men create a company to contract public works projects with corrupt governments throughout Latin America. They win commissions worth millions, they invest in private airplanes and apartments in Dubai, but the projects never materialize. The story is well known, almost routine in countries like ours, with unpaved roads, forgotten towns, paltry state presence, and institutional chaos.

These men are the Ancízars, or the “kamikazes,” created by Roberto Rubiano Vargas in his novel Banzai: Violencia en la carretera. Audacious, barefaced criminals who take advantage of poverty, impunity, and people’s ignorance to steal hand over fist in cahoots with the government and the military. Not satisfied with their crimes, when they see that the front they put up could collapse, they hire an unfortunate soul—a dupe who lets himself be dazzled by the pay, the luxuries, the flattery—to be the victim of a kidnapping, all so they can make money off of a lawsuit against the Colombian government for its failure to protect him. The man, Manuel Antonio Figueroa, is traveling with his girlfriend in a convoy when it is attacked in the arid deserts of the country’s north. As people work to save his life, Mireia, his girlfriend, wonders, “¿Qué es lo real?” [What is real?] She then answers herself with: “Yo no lo sé, imposible saberlo” [I don’t know. It’s impossible to know].

This is one of literature’s functions. To erase the boundaries between the real and the possible. To blur the line that separates us from the characters living in books. Goons, dupes, narcissists, bumblers. We are all of these things, too, on our side. Even more so, really, now that the boundaries of the real and the fictitious have been erased by the pandemic—so frequently invoked that it seems like a cliché, an enemy to be blamed for everything bad or thanked for every kindness. But it’s true that this modern-day plague forced many of us to wonder about that fluid boundary between life and fiction, something we thought we understood so clearly before. Perhaps it was unintentional, since Rubiano Vargas started this novel when the world had not yet ended, but he blurred these borders, and we end up reading a story that seems so true, so ours, so tangible, that we have to stop to think if we didn’t pull it out of the crime pages of a newspaper. With good reason the author often speaks in his conferences about the hazy meaning of truth. What is truth? He asks the question, and then he answers himself right away: it depends on the person.

The characters of Banzai are, like all good characters, contradictory. On one side is their reality of air conditioners, luxury cars, and women, and on the other, their reality of the Caribbean: suffocating, desertlike, with paramilitaries and an erratic, haphazard version of justice. They are the product of their time and their origin; that, too, is clear. Men stupefied by alcohol, technology, drugs, or weapons, for whom women are pieces of meat, accessories, underestimated to the point that it’s forgotten that these women are capable of turning their luck around in an instant. Banzai is a book that shows a man’s world, but there are two women who become indispensable to keep the story balanced. The first is Mireia, who travels between reality and the delirium of the Caribbean dunes, and the second is Nélida, a redheaded Cuban who holds in her hands the destiny of the Ancízar clan.

These women are heroines where the men stumble, who question themselves, who are survivors, whose stature grows over the course of Banzai. Because the novel has another characteristic, and that is to show those characters for what they are: clowns. In spite of their ability to terrify, to intimidate, to murder, they are, in fact, bumbling and ignorant, no matter whether they studied in London or never left La Bonga. The same stupidity, the same vacuousness, unites the owners and employees of the company alike, because they are all the same. All so macho and all so pathetic. Still, they are victims not just of themselves but also of their surroundings. A world at war that needs kamikazes willing to risk everything. A world in perpetual crisis, where survival comes at a high price.

Bolívar, the Ancízars’ goon, and his bosses; Emilio the bodyguard; Evelyn the hitman (with a woman’s name) and the kamikazes’ plastic wives; and even Manuel and Mireia—all are complicit in the parody: they end up, for better and for worse, assuming the consequences of their actions. But there is something more, something hidden and underlying, which Manuel describes well and Roberto displays as a backdrop in Banzai: Colombia.

[He remembered that when he was in college, he thought a part of Colombian society fundamentally didn’t like to accept itself as it is. Racism hides behind euphemism. We hate the poor, but we give alms at Mass. The quality of a pair of shoes matters more than the intelligence of the person wearing them. We sympathize with paramilitarism because we hate the guerrilla, and that justifies any crime. And so on.]

In this masterful way, Manuel summarizes his country and his compatriots. It doesn’t matter if they are in Los Angeles, Madrid, or Bogotá, because while they may have left Colombia, Colombia hasn’t left them.

A country of squalor, poverty, racism, but also an elitist, violent, and criminal society. Evelyn no doubt began to kill in order to get a Hummingbird; Javier Ancízar began his criminal dealings because he wanted an apartment in Dubai—but nearly all of us are Manuel, who began to work with the kamikazes because he didn’t want to be poor and unemployed anymore.

Because they are a product of this country that puts more emphasis on the quality of shoes than on the mind, Manuel and Mireia delve into this world of fantasy, of private flights and expensive prostitutes, even knowing that they don’t deserve it; that, as they say on the Caribbean coast, “de eso tan bueno no dan tanto,” they don’t just hand out stuff that good; when it sounds too good to be true, it is. And even so, they choose to look the other way, ignoring the alarm bells and believing themselves to be chosen, to be the recipients of tremendous luck.

But Manuel doesn’t entirely fool himself because he knows his limits. He knows he is mediocre, and that knowledge and acceptance force him to always question why Javier Ancízar hired him. Why do they have him fly out from Madrid? Why is he paid so well and given so many perks? In the end, even though vanity prevails, Manuel, this favored son and eager suitor, wants to show that he is not a lost cause, that he’s a keeper, that he can make his mother and Mireia proud. In the end, the pair of shoes turns out to be more important than the mind, as he himself said. Which is why, perhaps without meaning to, he becomes the most suicidal of the kamikazes.