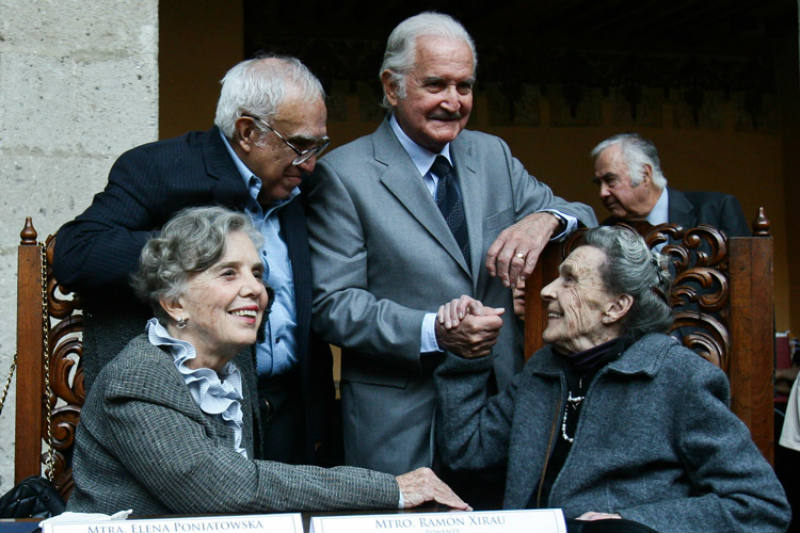 Elena Poniatowska: The Switchwoman of Memory

If we were to believe that those conceited little people every single day on primetime TV are the ones that move history forward, a good part of our heritage would be incomprehensible. But the bad fiction broadcast by roundtables and newscasts isn’t fatal. Thanks to curiosity and the art of people like Elena Poniatowska, every now and again we have the chance to take a look into characters of another consistency, like Demetrio Vallejo, the inspiration for Trinidad, the protagonist of El tren pasa primero (The Train Passes First).

Trinidad Pineda Chiñas, the main character of El tren pasa primero, exemplifies how some historical figures who found themselves at the crossroads of circumstance, a common denominator in key moments, have been buried beneath the media noise which instead exalts straw men that fall down at the first puff of air: the Calderóns and the Espinos of the world. In Trinidad Pineda, Elena Poniatowska rescues some Demetrio Vallejo moments, and does so not based on some idealized vision, but rather on his feats and daily contradictions; she constructs an expansive coming-of-age story that takes union struggle and the protagonist’s difficult loves as their axes. A series of stories radiate outwards from those axes, giving volume to the main plot, allowing the reader to reconstruct –from among many other aspects of our history– the evolution of Mexican trade unions, the decline of the railroad and the vanity of the presidency during the PRI’s golden years.

A country decoded around the train and the men who keep it running. Not for nothing, was the train for Trinidad “his reason for being on the earth; it was his dead father, his mother taking him by the hand to the station, the dead-tonnage of all his feelings, the tallest ceiba tree in the land. It had been a long time since the whistle echoed in his heart and had become a sacred animal that left its essence in his childhood dream and rocked it until daybreak. The train was his nahual, his other self.”

Elena Poniatowska dances with Carlos Monsiváis on his seventieth birthday.

El tren pasa primero joins a tradition that treats the railroad as an object in order to express human passions, just as in Emile Zolá’s La Bête humaine, or that treats the promise of modernity offered by this machine that increases men’s speed, as Oliverio Girondo does in Poems to Read on a Streetcar. But Poniatowska’s novel is no mere recreation of discourse on modernity; rather, it gives an account of the way in which modernity came about in a place where different time periods coexist and where technology was one additional ingredient into barbarity. “‘I know what time it is by the train’s arrival,’ Ventura Murillo used to say, in spite of the infamous unpunctuality of Mexican railroads.” This paradox is symptomatic of a society in which everything pressing is always postponed, and there are battles happening just outside the timetables.

The post-revolutionary modernity we discover in these pages is one that placed the imperatives of liberty and justice second to the need for order. Through the rail workers’ struggle, we understand how corrupt union mechanisms, repression, bribery and co-opting worked (and still work). Thanks to these men struggling for minimal improvements in their workplace, we can see the figure of the high priest of the PRI, the President, whose words may not be disputed and whose promises may be trusted until he decides they’re no good anymore. The battle for the survival of their source of work also appears in the story of the railroad workers’ union, relegated to the background when the priority is to facilitate sacrosanct Foreign Investment as much as possible. Because that is the origin of the decline of our trains: when the American auto industry sought to move into Mexico, the rise of highways instead of railways and of cars instead of public transportation soon followed. That was the future, which is never born here; it always comes from somewhere else, with no desire so much as to ask for the local time.

Portrayed in the figures of Peña Walter, the manager of the company, and Norma, his wife, Poniatowska draws the portrait of an oligarchy that passes its time complaining about having to coexist with the Mexicans, while at the same time enriching itself thanks to the extreme poverty in which Mexicans live. And so, as the couple is getting ready to go to a party, the manager muses, “Mexico is a country of huarache-wearers, when not barefoot! Just for a moment, he wanted not to have to think about those starving to death, about that whole stinking, vulgar mob he had to deal with.” This clique was the forerunner to today’s big businessmen, who stuff their faces while talking about democracy even if they’ve risen to luxury thanks to perks obtained in the old regime. The big businessmen were not the ones who faced the corrupt union system; the better part of their consciousness was busy improving the race. The bête noir of corporatism was this handful of men and women about whom Elena Poniatowska tells us: poorly fed, self-educated, naive, who would risk their physical bodies with no well-founded hope of having their demands addressed, who nevertheless mounted the most important social movement subsequent to the Revolution and achieved the unthinkable: to decide for themselves, at least for a time, who their leader would be.

The environment in which the railroad workers had to defend themselves may also provide us with a sort of distant mirror to gaze into tactics employed for media lynching. In this time of scoundrels in which we find ourselves, with right-wing spokesmen calling upon dissidents to definitively admit defeat, demanding that the marginalized quiet down and learn a bit of decency, it’s worthwhile to consider the example of the railroad workers and remember that reality does not need to be sponsored by Bimbo in order to change.

Learning to see ourselves, above all the noise, is one of the tasks of literature. And one of the virtues of good literature, like that of Elena Poniatowska, is to represent a myriad of human dramas, to resist Manichaeism. Hence, one of the qualities of this novel is the way in which it captures the moral ambiguity of its heroes. While respect and even admiration for Trinidad Pineda Chiñas and the movement he leads is clear, we can also witness the internal disagreements within the trade unions –the at times simplistic statements, the betrayals– and the rather schizophrenic attitude of many Communists who would risk their lives to liberate the world, but were incapable of changing a diaper  to liberate their wives. The trade union struggle was an ethical imperative, but also a show of virility, as Rosa, one of the leader’s partners, discovers: “She doesn’t matter, there’s no such thing as a private life of a fighter. What’s more, a fighter shouldn’t have one, it just slows him down and damages his spirit.”

Furthermore, you don’t have to believe that the women of this saga are confined to the role of the warrior’s repose or that of passive victims. The Adelita archetype escalates and multiplies. Female railroad workers are activists, orators in mass meetings, teachers, shock forces during strikes, lovers that choose the men they desire and then get rid of them –and yes, also women that assume the role of sisters, wives, mothers, but that no longer conform to the role traditionally assigned to them. Bárbara does so, as she insists on rethinking everything, “even how to fry an egg.” It’s as Sor Juana said in her “Reply to Sor Philotea”: “One can perfectly philosophize and prepare dinner. And when I see these little things, I usually say: if Aristotle had cooked, he would have written much more.” The women that Elena Poniatowska brings to life are like Colometa, the protagonist of In Diamond Square, Mercé Rodoreda’s extraordinary novel in which she tells the life story of a Catalan woman who survives the Civil War, Franco’s peace and then poverty without complaining; when someone finally shows her a touch of generosity she becomes emotional for a moment and tells us: “And I began to cry, as if I weren’t a woman.”

Elena Poniatowska with Julio Cortázar in the offices of Siglo XXI Editores.

El tren pasa primero narrates the feats of a collective character, railroad workers, and from among this group, the rise of a leader from the extreme poverty of his town in the southeast, triumph in the face of the philanthropic bogeyman, his fall into repressive machinery, and his final encounter with love. But this path is not narrated linearly: in the third part of the book, we have the opportunity to get to know the leader’s childhood, which, in some manner, is the result of all his subsequent life, because a look back makes sense of his accomplishments, and returns the figure of the leader to human scale. And this kind of look, in all the works that Elena has gifted us, is something that we have to be thankful for: her ability to take idols down from their pedestal, and at the same time, the empathy that allows her to stand in solidarity with the people who we pass right by in the street. And this is not a solidarity buoyed up by adjectives, but rather expressed with the full arsenal literature has to offer. Without renouncing the revival of popular language, Elena Poniatowska goes beyond folkloric stereotypes and conveys characters with a complex system of language and with elaborate thinking, recounting their internal drama. I am tempted to say that it is for such merits that Elena Poniatowska is the essential writer of Mexican literature, but that would be unjust: She is essential because, as she has once again demonstrated to us with El tren pasa primero, she writes profound and exciting novels which at once both spur our awareness and that give the reader the pleasure one expects when facing the first page of the book.

Mexican writer Yuri Herrera is the author of the novels Trabajos del reino [Kingdom Cons], (2004), Señales que precederán al fin del mundo [Signs Preceding the End of the World] (2009), and La transmigración de los cuerpos [The Transmigration of Bodies] (2013). All three novels were published by Lisa Dillman. Signs Preceding the End of the World was published to great critical acclaim in 2015, winning the 2016 Best Translated Book Award. He is currently an associate professor of Latin American Literature at Tulane University. 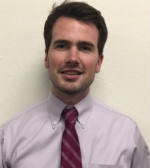 Chris Madison is a freelance translator living in California. He holds an MA in Spanish translation from the Middlebury Institute of International Studies. His translation of Rafael Rojas’ “Octavio Armand and Zequeira’s Hat” appeared in the November 2018 issue of Latin American Literature Today.

How Are We Editing Shakespeare in Spanish?

It’s a very peculiar experience to begin addressing the theatrical and hermeneutic problems of the so-called “Nunnery Scene” in Hamlet by telling your students: “Turn to page 57.” It seems…

"Searching for Ways to Sacralize Desire": An Interview with Ana Clavel

So we have to find ways to sacralize, ritualize, and symbolize desire.

The Art of Bidding Welcome: Andrés Neuman in Translation

Some books, more than books, are thresholds: lines we cross that leave us somewhere other than where we began. Some books lead us to realize, paraphrasing the gnostic gospel of…