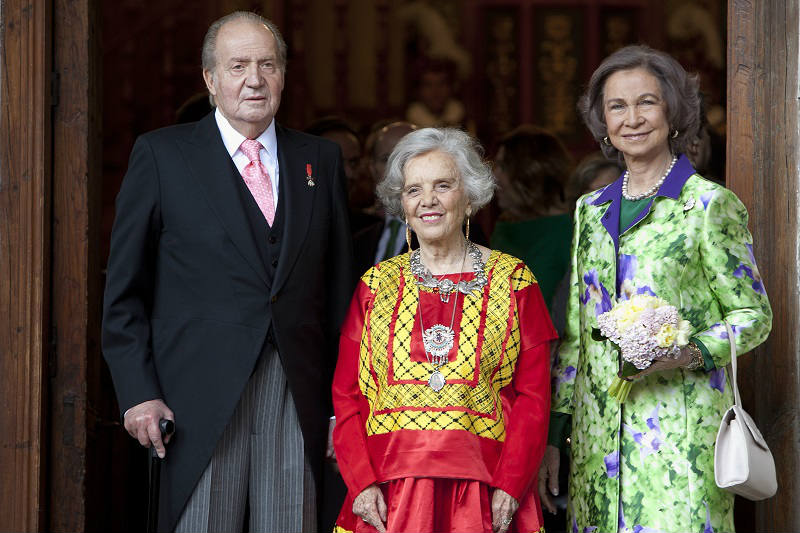 Elena Poniatowska with King Juan Carlos I and Queen Sofía of Spain at the presentation of the 2013 Cervantes Prize.

Elena Poniatowska requires no introduction. She is the author of more than forty books that encompass almost every literary genre: interview, short story, drama, chronicle, testimony, novel, essay, and biography. Notwithstanding her wide-ranging literary corpus, she is best known for the genres she reinvented in Mexico: the interview and the testimonial novel. An outstanding example of the latter is La noche de Tlatelolco (1971) (Massacre in Mexico, 1975), is a collective account of a tragic confrontation between students and soldiers reflected in a collage of desperate voices that are at the same time the work’s content and form. Hasta no verte Jesús mío (1969) (Here’s to You, Jesusa!, 2001), a neorealist novel, is the testimony of a cantankerous and admirable woman who fought in the Mexican Revolution and lived more adventures than the Periquillo Sarniento (The Itching Parrot) or La Picara Justina (Roguish Justine).

Although Elena has enjoyed enormous success as a journalist and writer, she has always been somewhat forsaken by elite Mexican literary circles. As a journalist, she tracked the news, and because she was reporting day and night, Elena never found time to participate in the activities of Mexican literary “café society.” Moreover, Elena was quite young when she became convinced that the only books worth writing were useful ones, books meaningful to her country, which led Carlos Fuentes to exclaim: “Look at the poor little Poni! There she goes in her beat-up VW Bug on her way to interview the head of the slaughterhouse.” Apparently, the price of onions and tomatoes, as well as reports of evictions and land takeovers, were much more significant to her than the often-fleeting ideas of the contemporary literary vanguard. Perhaps that is why one day she confessed to me that some writers consider her “the cook, the street sweeper, the janitor in charge of cleaning out the toilets of the great manor of literature.”

Far from belonging to this world that so fascinates her, Poniatowska is descended from the last king of Poland, Stanislaus Augusto Poniatowski and the Marshal of France, Prince Joseph Ciolek Poniatowski. Her family includes among its illustrious ancestors an archbishop, a musician, and several writers, including her Aunt Pita –Guadalupe Amor– the infamous and extraordinary poet who baptized herself “the absolute Queen of Hell.” Given her royal pedigree, and strong leftist inclinations, her European relatives, who treasure their royal past, dubbed Elena “La Princesse Rouge”—“The Red Princess.”

Elena Poniatowska with King Juan Carlos I of Spain at the presentation of the 2013 Cervantes Prize.

Elena Poniatowska was born in Paris in 1932 and emigrated to Mexico when she was ten years old, along with her mother and sister Kitzia, all three fleeing the dangers of Western Europe, which was at that time in the throes of the Second World War. Her mother, Paula Amor de Ferreira Yturbe, who passed away in March 2001 at the age of ninety-two, was a Mexican whose ancestors left Mexico after the execution of Emperor Maximilian and the celebrated insanity of his beloved and manipulative Empress Charlotte. Born in France, Doña Paulette met her future husband, Prince Jean E. Poniatowski Sperry, during a ball held at the Rothschild’s family home in Paris, and they married shortly after, in 1931. The couple had three children: Elena, Kitzia, and Jan, the youngest, who died in an automobile accident in 1968, when he was only twenty-one years old.

Elena began her education in France, where her grandfather gave her her first lessons in French and mathematics. Upon her arrival in Mexico City, she continued her elementary schooling at the British-sponsored Windsor School and concluded her formal education at the Convent of the Sacred Heart (Eden Hall) in Torresdale, near Philadelphia. There she completed “Academic Classes”: four years of general studies as well as lessons in dance, religion, and etiquette. Although her teachers encouraged her to continue her studies at Manhattanville College, a sudden devaluation of Mexico’s currency left her parents unable to finance her university education, and Elena returned to Mexico, a land of volcanoes and pyramids, haciendas and palaces, but also of huts and huaraches, pulque, and huitlacoche.

Once back in Mexico, Elena studied shorthand and planned to find work as a bilingual secretary, but she never pursued a bachelor’s degree. In her own words, she “never even came close to a university… not even at night,” although she has been awarded several honorary doctorates by universities in Mexico and abroad –the most recent being conferred upon her by Georgetown University in 2016. Although Elena is the first to point out that her higher education was less than conventional. She did not attend the University of La Salle, rather the University of La Calle (the street). Instead, the subjects of her interviews –including Alfonso Reyes, Luis Buñuel, Octavio Paz, Diego Rivera, Juan Rulfo, André Malraux, and Rosario Castellanos– became the generous teachers of a young woman who was always curious and occasionally impertinent.

Elena Poniatowska with Sergio Pitol, winner of the 2005 Cervantes Prize, at the presentation of his book of memoirs in the Manuel M. Ponce room of Mexico City’s Palace of Fine Arts.

I first met Elena Poniatowska in 1990, almost thirty years ago, when I gave a lecture dedicated to the poetry of Guadalupe Amor. Although we had just met, Elena immediately invited me to her house in Mexico City, upon my arrival there several months later, she allowed me to pour over many interviews she had conducted to her eccentric Aunt “Pita.” Much of the material for my book La úndecima musa, Guadalupe Amor (1995) [The Eleventh Muse: Guadalupe Amor] was the direct result of this first meeting in Mexico. At that moment, surrounded by innumerable photo albums, scrapbooks, newspaper clippings, and other materials that bore witness to an extraordinary life, I decided to devote my next biographical project to Elena.

My book has a dual purpose. On the one hand, it presents the talent and personality of one of Mexico’s foremost living writers to a general English-speaking public, to those individuals, for example, who might think that Elena Poniatowska—given her last name—is a Russian ballerina. On the other hand, I attempted to create a living kaleidoscope, a mosaic composed of hundreds of tiles –the voices of her mother, nanny, fellow writers, literary critics and, most important, herself. It is a book that, at the same time, renders unspoken homage to Elena Poniatowska through its construction as a collage, which I believe to be the best medium to reflect—albeit fleetingly—the cardinal points of her life and work. Nonetheless, and perhaps in imitation of the daring Phaeton, who plunged from heaven’s highest spheres to the dark depths of the ocean when he attempted to drive the carriage of the sun, I am conscientiously determined to bring her eternal fame or die trying.

Elena’s literary career flourished in the nineties with Tinísima (1992) (Tinísima, 1996), not only a fictionalized biography of the Italian photographer and communist militant Tina Modotti, but also a political and cultural fresco of the first decades of the 20th century in Mexico and Europe. In Modotti, Elena discovered a persona whose life and work nearly covered the gamut of topics found in her previous books: the human condition, passion love, and ideological conviction, in addition to the experiences of a foreigner immersed in the ancestral mysteries of the brave new American world, the same world that Modotti re-created in her sometimes delicate, sometimes dogmatic photographs.

For Elena, this decade was also a period of reflection upon her literary and journalistic odyssey of nearly half a century, and the interviews collected in eight volumes entitled Todo México (1991-1999) [All of Mexico] is evidence of this inclination, as are her biographies of two key figures of the the Mexican cultural world whom Elena met in the fifties when she first interviewed them: Octavio Paz: las palabras del árbol [Octavio Paz: The Words of the Tree], and Juan Soriano: niño de mil años [Juan Soriano: Child of a Thousand Years], both published in 1998.

In my book, Elena Poniatowska: An Intimate Biography, I document the increasing globalization of her literary work, which is considered required reading in universities in the United States, where many of her books and essays have been translated into English and where more and more researchers devote articles, reviews, and essays to the multiple themes encompassed in her voluminous and heterogeneous literary production.

The dossier that Latin American Literature Today dedicates to Elena, to which I am honored to contribute, as both biographer and friend, not only adds a new and significant dimension to the scholarship of her life and work but also serves as a fitting tribute to one of the most important figures in the Spanish-speaking world.

Xàbò Mè’phàà: Ser uno y ser todos. The voice of we in the poetry of Hubert Matiúwàa

Hubert Matiúwàa is a poet of considerable agility. In 2016 his first book, Xtámbaa / Piel de Tierra, introduced us to a vertiginous voice which gallops forcefully in light of the…

The Sword of Poetry

First and foremost, I would like to express my appreciation for this important and unexpected prize in the name of my husband, Darwin “Bud” Flakoll, who passed away some years…