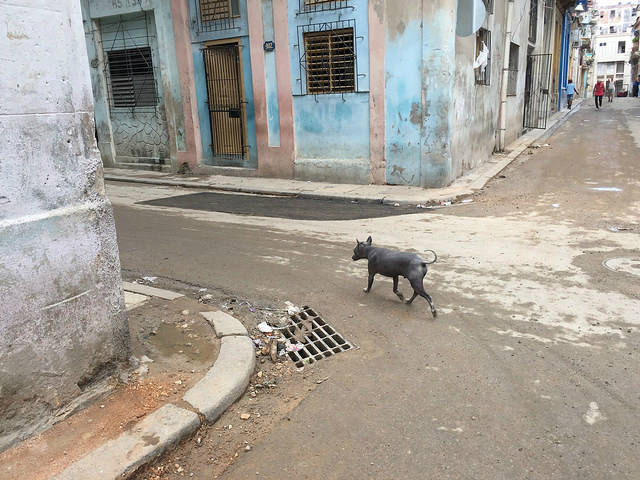 I went to live in a dead horse. I found there was a lot of space in there, no noise, no distractions. No heart pumping rhythmically, no lungs. No functioning kidneys, no liver. Nothing. All peaceful and dead.

I entered through its rigid jaws and moved in my furniture. My wife and I had recently separated. She’d kept our apartment and was there with our four kids.  Me, I was content with my dead horse. Just when I thought I was on the verge of sleeping in public parks and eating lunch and dinner in horrible state-run cafeterias, here’s proof that the gates of heaven had opened for me.

There was more than enough space for my CDs and books and the clothes that hung on metal hangers inside my closet. I didn’t want for food. I went about devouring the dead horse’s rotting organs; then, as the decomposition process advanced, maggots, larvae, insects, and other critters penetrated the carcass, helping me to maintain a balanced diet.

As time passed, the horse’s body grew more and more swollen, which expanded the space immensely. After a week and a half, there was enough space for me to throw a party for my coworkers.

It was a total success. My workmates strolled around, amazed by the spacious interior cavities, eating rotting liver and select pieces from the soft parts of the lungs. In the end, they congratulated me on my superb acquisition.

I was even able to hook-up with my secretary. We made love after everyone left, right there, in the dead horse.

She asked if she could stay and live with me; I told her no. I felt a little sorry for her, but I didn’t want to ruin a relationship that, until yesterday, had been strictly professional.

The horse’s body reeked. One day the councilman passed by, and the stench assaulted his nostrils with the force of an atomic bomb. He came up to my dead horse and said, “Throw that trash in the communal grave!”

So, after a month of exposure to the elements, they took the horse to the communal grave, which worked out well for me, because there wasn’t a lot meat or muscles left. Just skin and bones. I was on the verge of living on the streets again.

The communal grave turned out to be a true blessing. It was full of other dead horses, in different states of decomposition.  I moved my stuff and left behind the weathered skeleton of my original horse.

Once again, there was more than enough space and food in abundance. I threw another party at my new place, and all my friends exclaimed, “This is a real palace!” So they brought their wives and kids and came to live with me in the communal grave.

I wasn’t able to convince my wife to come, but I did bring the four little ones, and I gave each one their own horse. You should have seen the three little girls and my little man shouting and jumping with joy, as if I had placed the best thing in the world in their tiny hands.

Life continued its usual course. The kids went to school in the morning, and the adults to work. During the afternoons, the kids played hide and seek or cops and robbers, or whatever they felt like playing, and we adults passed around a bottle of rum, talked about politics and played dominoes, surrounded by old skeletons and swarms of multicolored flies; a veritable labyrinth of life and death to be admired in silence.

From time to time other families joined us, other people, and if we’d ever been concerned about the eventual lack of space and shortage of food, we’d already forgotten about it. Every other day, they filled the grave with new carcasses. Enough space and enough food. So we welcomed anyone who cared to join us.

One day the councilman passed by, and the pungent odor of so many rotting carcasses filled his nose with tears. “What’s going on?!” he shouted furious, “Burn all of this trash!”

“People live here,” we said, but he refused to believe us. We invited him to visit our abode, and he declined, citing political reasons. “We’re happy in this place,” we said. He wrinkled his nose, muttering something about sources of infection, and left.

Then the soldiers came with cans of gasoline, and I watched them while they doused the animals’ decomposing bodies with liquid, the bones and the larvae of the multicolored flies, the dried skins and worms as fat as forearms, my coworkers and other like-minded people who refused to leave their homes.

I watched them burn as the soldiers threw matches on all that gasoline. My four kids were there too; even they refused to abandon their home. The three girls and my little man flailing their burning limbs, screaming because they were hurting, their hair on fire, and their eyes and their tiny bellies too.

Then they threw a pair of grenades into the smoking hole, and all those bits of charred flesh flew into the air, like birthday confetti.

I didn’t burn. I didn’t like the idea. I preferred to remain homeless.

Then I went out to my wife’s apartment. I went to explain the situation, and to ask if I could stay under her roof for a couple of nights, but she was living with some guy and didn’t want anything to do with me. She shoved me out of the house and slammed the door in my face, without giving me the opportunity to tell her anything, not even about the children. Nothing at all.

Then I went to a state-run cafeteria to eat dinner, and later I took my things to a public park, to spend the night sleeping on a bench. I didn’t think I had any other option.

But, along the way, I happened upon a dead dog on the sidewalk and remembered that maybe my secretary might be in there. So I peeked in and, sure enough, there she was. I asked her if I could spend the night with her, because I didn’t like the idea of sleeping in the park and fortunately she said I could stay.

(Editor’s note: The stories “Dead Horse” and “Nazi,” by Cuban writer Raúl Flores Iriarte were co-translated by members of the Spanish Translation class at the University of Oklahoma, under the supervision of Dr. George Henson.)

Between my legs I hide a droplet of night / on my cheek and shoulder they linger like fireflies,  / the shades of three lovers, / I’m not sure a…