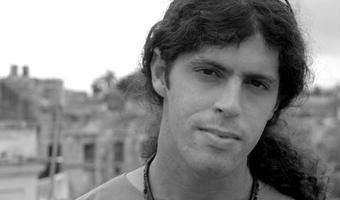 There’s a dead Nazi under my table.  It’s the dinner table, so I don’t think the Nazi can stay down there for very long.  And I can’t invite him to dinner because, like I said, he’s dead.  And I can’t eat with a corpse under the table either, because the food will fill up with gnats, dragonflies, and worms, big and blue like a newborn baby’s arm.  Quite a quandary this dead Nazi under my table.

I’ll have to wait till the garbage truck comes by to see if I can smuggle him out.  I don’t know if I can.  He’s big and thick and fat.  He’ll make an excellent    playground for worms and other such creatures.

I’ll have to talk with the truck drivers.  To see what they say.  To make sure they’re not Nazis too who’ll run and report me to the Central Office.  The slightest slipup and they send you to a concentration camp to plant potatoes and clean government toilets.

There are none so blind as those who will not see, I always say.  Maybe the garbage men aren’t blind.  Maybe they are, and all the better, because then I could smuggle the body out without any problems.  The dead Nazi would end up in the city dump, fodder for gnats and horseflies and worms, fat and blue like a little boy’s nightmares.

In the meantime, he’s still under my table.  I could bury him in the patio, but I dunno if I could drag the body that far.  My wife would have to help me.  I’d have to wait till nightfall, because if they catch you burying a Nazi in broad daylight they’ll give you a fine that God himself couldn’t pay.  And if you don’t pay the fine, they send you to the concentration camps.  To plant potatoes and clean government toilets.

My wife’s at work.  She won’t be home till this evening.  When she sees the dead Nazi under the table she’s going to scream bloody murder.  She’ll wake the neighbors.  Someone will call the police and report us.  Things are going to get ugly.  I’m going to have to try and get rid of the body before she gets home, by any means necessary.  My wife doesn’t mean to cause trouble, and I know she’ll help me with the burying and everything, but she’s going to scream bloody murder, and I don’t want any trouble with the neighbors.  Much less the police.

If the police come and catch you with the corpse of a dead Nazi under your table things can go bad for you.  They’ll throw you in the slammer for thirty days and then make you do community service labor.  All in all, Nazis are real lowlifes.  Dangerous and contemptible.  They treat other people bad.  They send you to concentration camps for any reason at all.  If you misbehave, they give you fifty or sixty lashes in front of the other prisoners and, if you do anything else, they stuff you into a communal oven like Christmas cookies.  Bad dudes, those Nazis.  They strut around in their uniforms, acting all cute, covered in medals, going to Party meetings.

This one wanted to send me to do community service.  I told him no.  He tried to convince me, but I still told him no.  I didn’t want to do community service.  It was a really a really dangerous situation: if you say no to a Nazi too many times, he’ll send you to a concentration camp in retaliation.  Before you know it, you end up with fifty or sixty lashes tattooed on your back or, even worse, stuffed into one of those communal ovens like a roast chicken.

I try to stick him in some plastic bags.  I can’t.  He’s big and fat and weighs a ton.  I loosen his belt and take off all his medals of military glory.  He still won’t fit.  I’d have to cut him up into pieces and I don’t know if I want to do that: the risk is too great.  If they catch you chopping a Nazi into pieces they send you to the firing squad.  You end up on National TV, tied to one of those wooden posts, two or three bullets piercing your guts.

Maybe the punishment would be less if they caught you chopping him up at night.  I dunno.  They might not catch you either.  Still, it’s better not to take the risk.  The neighbors might catch a whiff of what’s going on and report you to the police.  It could go really bad for you.

I put the medals and the uniform in one of the garbage bags.  There’s still room for other stuff, so I peel some potatoes, put them on to boil and throw the skins in the bag.  There’s still room, but for the time being, I can’t think of anything else to throw in.

Sure, I could also bury him in the basement.  The ground is soft, and I’ve buried things there before.  Five or six dogs that died of old age.  I don’t know if my wife has buried anything there.  But if I bury the Nazi in the basement, the stench during the summer will be unbearable.  The house will be overrun with cockroaches and other unwelcome guests.

The best thing would be to go to the supermarket and buy bigger bags.  So I go and, in the household supplies aisle, I grab five or six extra-large bags because one probably won’t be enough for his big, fat, heavy body; then I swing by the food aisle to pick up a few frozen chicken breasts.

Back at the house, I put the chicken breasts out to thaw and stick the dead Nazi in one of the bags.  This time he fits.  I sit and wait for the garbage men to arrive.  Or my wife.  Whoever comes first.

One of the medals has fallen onto the floor.  It’s a little silver star.  It shines half hidden by the table leg.  I pick it up and look at it.  I put it on my lapel.  It looks good.  But I take it off right away, lest one of my neighbors see me through the window or the half-open door and report me.  I don’t know what the maximum punishment is for wearing a dead Nazi’s medals.  Especially if the Nazi in question lies under your dinner table wrapped in a garbage bag.  I might end up in a concentration camp planting potatoes and cleaning government toilets.  I could end up doing community service labor, without time off for the holidays.  Or in front of a firing squad, with a grimace frozen on my face while tracer bullets penetrate my belly one two three and rip clean through my guts.

(Editor’s note: The stories “Dead Horse” and “Nazi,” by Cuban writer Raúl Flores Iriarte, were co-translated by members of the Spanish Translation class at the University of Oklahoma, under the supervision of Dr. George Henson.)

Those eyes the color of color / from a gray height, watch / bellflowers, trickling water.

Before Objects: Emar and the New Physics

This essay is dedicated to a little-known article published by Juan Emar in 1935, in which he addresses subjects such as excision, self-awareness, and our understanding of the world around…

Far too high: the sky / suspiciously white. / The day resists itself, the light flees, withdraws, / concealing what it finds. Everything looks / for its pretext in the…