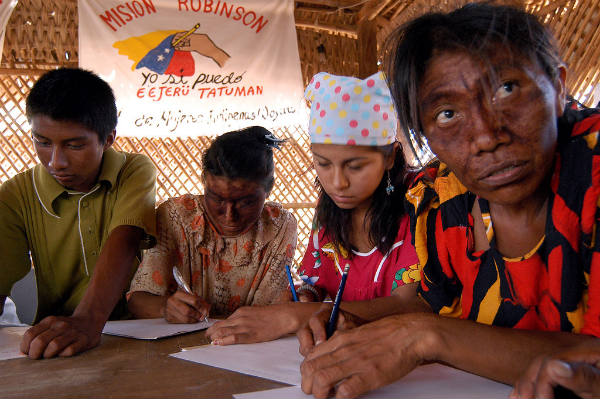 Borders are Lines that Fade Away in the Desert

This dossier is dedicated to Jaya, whose role in the diffusion of Wayuu
literature and Wayuunaiki language is one of her most memorable legacies.
I send an embrace to you in the sky, sister.

In August of last year, we had the opportunity to publish a dossier of indigenous literature dedicated to contemporary Wayuu literature written in Colombia in LALT. Within the texts we published, there were evident and repeated allusions to the Wayuu people “of this side” and “of that side,” paraphrasing Cortázar, since the Wayuu community lives in the desert of the Guajira on both sides of the northern border between Colombia and Venezuela.

This community’s binationality serves as evidence of the arbitrary nature of national borders and exemplifies once again how political borders divide territories that, socially and culturally, are one and the same. The Wayuu, like almost all communities that live along a border, tend to jump over national boundaries regularly, and the ties that bind the community are stronger than the governments of either country.

This example of community is pertinent now more than ever in the political context of the relationship between Colombia and Venezuela. Often, in spite of our similarities, the governments of both countries have placed themselves ideologically on opposite ends of the spectrum, and today the relationship is as tense as ever. In this context, this dossier of Venezuelan Wayuu literature seeks to remind, to remind us, that more things bring us together than keep us apart.

This dossier has relied on the invaluable participation of Wayuu writers and intellectuals. On the literary side, we have two writers, Jayariyú Farías Montiel and Reinaldo de Fernández. Jaya, as we all knew Farías Montiel, was the co-founder and director of Wayuunaiki: el periódico de los pueblos indígenas [Wayuunaiki: the journal of indigenous peoples]. This monthly journal is published in Spanish and in Wayuunaiki, and it features news from and about the indigenous communities of this continent. Jaya was not only a tireless woman in the struggle for the rights of her community; she was also a wonderful person. Jaya passed away in 2017, and her family has shared with us a book of poems that were unpublished until now. From this book, titled Dulce diosa de los ríos [Sweet goddess of the rivers], we have chosen five poems, which have been translated to English by Ashley Caja.

Our second author is Reinaldo de Fernández. De Fernández is a very young poet; in fact, the poems presented here were published before their author’s eighteenth birthday, and his book Crepúsculo Guajiro [Guajiro twilight] is the culmination of a process that began when the author was just fourteen. This makes it especially interesting that Jonathan Cukla, a young translator, completed the translations of his poems.

The opportunity to publish these two poets, Jaya and De Fernández, forms part of a generational dialogue that proves the vitality and innovation of Venezuelan Wayuu writing. In a way, the poetry of De Fernández is a continuation of the poem that was Jaya’s life. Literature is the best way to keep authors alive, through their writings.

On the critical side of the dossier, we have six extraordinary texts and four authors. Of these four authors, three are Wayuu. Two of the texts were written as an homage to Jaya, and their writers were close to her: Weildler Guerra Curvelo and Estercilia Simanca. Guerra Curvelo, a Wayuu anthropologist, intellectual, and politician, wrote the note we publish here as a farewell to Jaya after the death of this important writer and journalist. Guerra Curvelo’s participation in this issue is also important, as studies of Wayuu culture can be divided into a before and after based on the studies of this anthropologist of the Guajiro. Likewise, the text by Estercilia Simanca is also an homage and a farewell to Jaya. Simanca was one of the writers invited to participate in the previous dossier dedicated to Colombian Wayuu writers, and one of her texts can be read in LALT No. 7.

We hope our readers will take pleasure in this collective effort, and we leave you with this dossier of Venezuelan Wayuu literature. Enjoy!

*The editor of this dossier wishes to thank Ana Kay, Jaya’s beloved sister, and Ana Karolina Mendoza Percefield, whose provided us the unpublished poems, texts, and photos by and about Jaya. Their collaboration in this issue was invaluable.

Ana María Ferreira is an assistant professor at the University of Indianapolis, where she teaches and researches on Latin American literature and culture.  Ferreira graduated from Georgetown University, and she is interested in colonial and postcolonial indigenous writers.  For many years, Ferreira has collaborated with Wayuu writer Estercilia Simanca, and she dedicated two chapters of her PhD dissertation to her work.  To professor Ferreira, indigenous literature has been, from the fifteenth century to this day, not just a way to preserve indigenous traditional stories and cultures, but also a form of resistance to colonization.  She is also a regular contributor to the Colombian magazine Razón Pública.

A Sample of Colombian Poetry

What follows is a work of words, manifested from diverse points of power, that names what passes through us and what contains us.

The neo-Baroque produced a strange air of family resemblance in the Cuban writers we most associate with the heights of that aesthetic— José Lezama Lima, Severo Sarduy or José Kozer;…