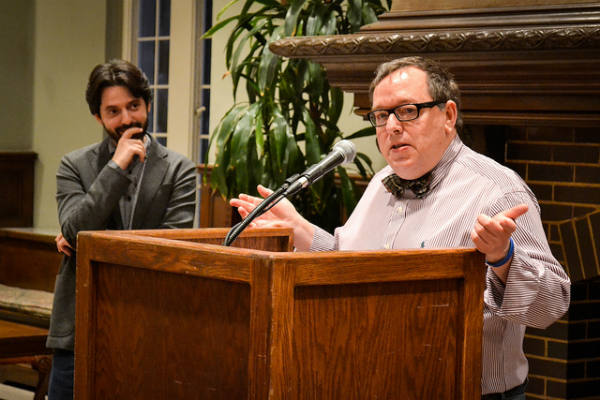 The original is unfaithful to the translation.
Jorge Luis Borges

In 2014, I had the good fortune of participating in the Puterbaugh Festival of International Literature & Culture honoring Spanish-Argentine author Andrés Neuman, whose work I had translated for our parent publication World Literature Today, which sponsors the biennial event.

During the gala dinner, amid the pomp and circumstance, just minutes before Andrés was to deliver his Puterbaugh address, I began to choke on a piece of steak. For several minutes, Andrés and some 200 assembled guests watched as three different men administered the Heimlich maneuver and, quite literally, brought me back from the brink of death. With my permission, Andrés would later recount the harrowing episode in his blog, writing:

In addition to reordering our priorities, George reminded us in dramatic fashion of three other things. That translators deserve much more attention than they usually receive. That a story’s breath depends on them. And that, if one day we did not have them, the entire world would be left speechless.

I mention this anecdote by way of introduction to this dossier dedicated to translators to underscore the importance that translators play in the creation of world literature. With good reason Portuguese novelist José Saramago wrote: “Writers make literatures national and translators make literature universal. Without translators, writers would be nothing, we would be condemned to live locked away in our language.” Saramago was keenly aware that his stature as a writer of world literature was due in no small part to his translators. Indeed, the Nobel laureate’s novels would be unknown to the English-speaking world if not for the labor of translators like Margaret Jull Costa and Giovanni Pontiero. What’s more, only a handful of the recipients of the Nobel Prize in Literature would have reached this highest pinnacle of literary success if not for their translators.

Imagine for a moment that Cien años de soledad, La muerte de Artemio Cruz, La ciudad y los perros, and Rayuela had never been translated into the dozens of languages they now inhabit. Quite simply, there may never have been a so-called Boom, and the works of García Márquez, Fuentes, Vargas Llosa, and Cortázar may have been relegated to mere national literature, selling thousands of copies in their native countries and throughout Latin American and not the millions of copies they have sold, and continue to sell, worldwide. These novels, however, have one other thing in common. Not only were they all written by male authors, they were also all translated by male translators. Only later did women translators, Margaret Sayers Peden, Edith Grossman, and Natasha Wimmer, begin to translate these giants of Latin American, nay world literature.

Coincidentally, but fortuitously, all the writers chosen for this dossier are women, Jazmina Barrera (Mexico), Carmen Boullosa (Mexico), Jeannette Clariond (Mexico), Mariana Torres (Brazil), and Luisa Valenzuela (Argentina). If nothing else, this happy coincidence suggests that the male-dominated world of writers and translators is changing. And Latin American Literature Today is proud to be part of this changing trend.

The translators featured here are among the most exciting and respected translators working in Latin American literature today: Lisa Dillman, Christina MacSweeny, Lawrence Schimel, Samantha Schnee, and Grady Wray. Accompanying each translation are short conversations between translator and author (Dillman, MacSweeney, and Schnee), or, in the case of Schimel and Wray, more detailed accounts of the challenges each translator encountered and the strategies each one employed to resolve them. In every case, these texts provide a unique insight, to borrow a phrase from Benjamin, into the task of translator, without whose endeavor literature would remain forever foreign.

"Translation is activism because it involves bringing one culture into another": An Interview with Laura Cesarco Eglin

Of Death. Minimal Odes, a verse collection by Brazilian poet Hilda Hilst translated by Laura Cesarco Eglin, was a recipient of the 2019 Best Translated Book Awards. The prize jury commented…

River the gully its wound among the rocks / the size of a sunrise / surrounded by trees. / Its murmur led us upstream, / like those who follow the…