Translating Jorge Canese’s work requires a disciplined rejection not just of the idea that translation might aspire to clarify or illuminate but of the idea that it can even clearly represent the original at all. His Spanish and Guarañol, already inflected to the point of routine partial or total incomprehensibility, is interrupted by outlandish interjections, sometimes in all-caps, like frantic shouts in a language I have yet to decipher. His language evolves over the course of each poem as over the course of the book according an irregular system of increasingly nonstandard orthography and the resulting phonological changes. His poetry reflects the degradation of his language, not by the urgency of systemic language oppression or toward the broad efficiency encouraged by technology, but by the destruction of a developed idiolect and its active reconstruction. Language became a tool to reclaim the poet’s autonomy—to proclaim his very personhood—after his release from incarceration by the cruel Stroessner regime that ruled Paraguay until 1989. Canese’s language writhes like molten rebar, the poet scrambling to straighten it as it cools, along a rule entirely his own. It stands proud and defiant and playful and incredibly serious too.

While translating these poems from Canese’s book Las palabras K (The K Words, 2011) over the course of several months, I periodically queried the poet about some of my decisions and potential decisions, both by email and Facebook. He acted as if he’d never received my dozens of questions—about anything else, he replies almost instantly. In several significant cases I’ve had to chart the direction of my translation according to my best guess at what must be happening syntactically. As I continued translating his poems I came to realize that the impossibility and eventually the ridiculousness of my search for accuracy was actually the point, that Canese’s rejection of unequivocalness and celebration of ambiguity endowed the poems with their meaning and power. Rehoming these poems in English reminds me of the exponentially generative possibilities that the act affords us as practitioners and readers, and of the crucial role of language to our personal survival.

SEXUAL KUSTOMS OF THE LESSER PALEOLITHIK

Discover a nu kontinent or planet name it liquidate its natural owners. The method doesn’t matter katechize the rest for the good and for the bad impose your laws your language your favorite skin and eye colors. APÙROPE MANTÉ? We could at least try it killing oneself shouldn’t be such a sad theeng. Boarding the nearest cloud and rowing against the current like we alwayz did until the disgusting moment of the kavernous pollution arrives.

Añarakopeguaré evidently I was mistaken about the epoch of scaffolding my hand slipped I went off the map. Patienze I did it for your wellbeing because there wasn’t anything elze that could be done but stopping and saying: party on die julano I love you or the sun comes out the sun comes out and then be qwyet.

to save yourself and bee?

THE MYRACLE OF THE TOOTHPIKS

If time doesn’t exist, what is it that repeats itself so?
If time didn’t exist, what would there be left to do? There was a time —first of all?—
When I Wanted to believe That I Knew EVERYTHING that I Should have known Thên came Another time
When I Was More than sure Of knowing That I Didn’t know (ALLMOST) anything
Now I Live out this time Of wanting to believe Or Knowing how to live Of EVERYTHING IS HERE
and although it is impossible it’s just a question of reaching out one’s hand and touching it what?

The war of Rose was more a sport than a business in itself a social appointment for lofty kapos ministers friars ambassadors and smugglerz of every ilk. NEWSFLASH: shootout at the whorehouze at Mexico and Third ends the young prostitute’s life. We shoot bazookas and 105-caliber mortars. The nest disappeared as if by magik. 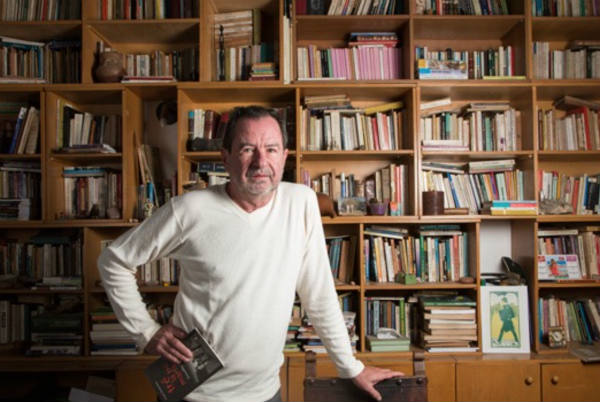 Born in Asunción, Paraguay in 1947, Jorge Canese, who also goes by Jorge Kanese, Xorxe Kanexe, and just the initial K, is a microbiologist and a university docent. His books of poetry include Paloma Blanca Paloma Negra (White Dove Black Dove), which was banned on publication in 1982 under the dictatorship that finally fell after thirty-five years in 1989, Kantos del Akantilado (Kliff Songs), Alegrías del Purgatorio (Joys of Purgatory), Indios-go-home, and Venenos (Venoms). Even for Paraguayan speakers of Guarañol, his work—which blends Spanish, Portuguese, and Paraguayan Guaraní alongside a significant percentage of idiolectic vocabulary, grammar, and wordplay—can be difficult to understand. In 2010 he published his most expansive work to date, Las Palabras K (The K Words), an occasionally undecipherable volume that remixes his previous work to even more opaque extremes. He has been jailed, tortured, and exiled, but now resides again in his homeland where, in his own translated words, “he continues to believe in poetry, though not much in what is labeled such in the present day.”

David Shook is a contributing editor to World Literature Today. He recently edited Like a New Sun: New Indigenous Mexican Poetry with Isthmus Zapotec poet Víctor Terán. He lives in Los Angeles, where he serves as editor of Phoneme Media.

From Carnation and Tenebrae Candle

Once again I saw the forest of elder trees, the little rivers and their nearly nameless inhabitants: the spoons of water, the pans of water and the mushrooms.

When she was born the wolf appeared. It was a Sunday at midday –eleven thirty, brilliant light– and her mother saw through the windowpane, the pointed snout, and in its…

by Claudia Peña Claros
In the glow of a hungry moon, the yellow dog finally shook off the ropes that tethered her to the post in a yard. Her desperate claws gouged at the…