from a red barn by Víctor Rodríguez Núñez, translated by Katherine M. Hedeen 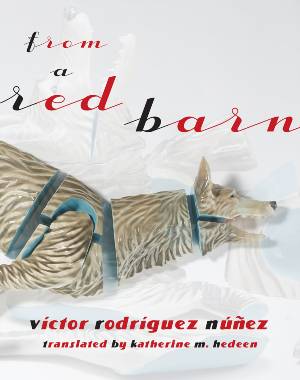 Víctor Rodríguez Núñez’s new collection of poetry from a red barn is incredibly vast—arising, perhaps, from the breadth of a migratory poet suspended stubbornly between two nations and cultures, a poet unseated and unlocalized. These poems wander through bucolic images of fields and skies, glancing into wildlife, both Cuban and North American, before shifting easily to sharp resuscitations of militant violence and xenophobia and condemnations of capitalism, of the “green profits of commerce.” In these varied topics, images and ideas are knotted and superimposed, placed together in critical juxtaposition as the artificial remnants of production encounter the organic material of nature. Rivers crawl beneath maps. Rust and wind meet.

Here the reader’s perceptions become knotty as senses cross and materiality is distorted. Light has the weight to pile up, to fall, and sounds have presence enough to tangle and become tangible.

Not only do these images mix but they become unhinged, arranged only by a thin and barely visible thread of unordered memories and the hedonistic joy of tying together fresh, rhythmic sounds. These lines are greedy for rich language and unruly associations. In one poem, phrases like “irradiation orbiting” trip quickly after images of disembodied “elbows on the verge” and voices “drunk on the ellipsis.” These impressions are organized less by any particular scene or discourse but more so by sound and rhythm, syllables tumbling after each other in pulsing enjambment. In this way, Rodríguez Núñez follows a memory that “didn’t do its duty,” a memory that “went astray in other traces.”

Among such themes as nature and revolution, a certain Ars Poetica also arises in this work as poetry itself becomes a topic. The poems make direct references to their own syllables, meter and grammar, calling attention to a rebellion of form which does not fall subservient to content in this collection. The reader is asked to wonder if “sonnets last longer than femurs,” if the horizon can be arranged in syllables, or if imagination “at the very least leaves your hands sticky” when molded into a poem. A landscape of self-critical poetics becomes a space to explore in this book. Even in their structure, these poems, all metered, unrhyming sonnets, push at the shape of the traditional sonnet, with some lines jutting out belligerently into the margins, providing variation to the visual pattern of the pages, giving breath to the rhythm. Altogether, Rodríguez Núñez takes the very blueprint of his poetry and interrogates it, innovates it, prodding at the way prosody and form are themselves makers of meaning.

The broad and plural themes of this collection point to Rodríguez Núñez’s own multiplicity of identity. A poet who decenters any obsession with nationhood through border-crossing movement and blurred locality, Rodríguez Núñez gives no impression of any sweeping intention or dialectic and this collection is perhaps only a brief iteration of his unfixed self, his “wobbly world,” a momentary intersection of memories, images, and tempos.

Katherine M. Hedeen’s profound translation of from a red barn is collaborative and generative. Opening the book with a foundational introduction, Hedeen describes her translation approach as a spiral where interpretations layer over each other, “never the same…since knowledge is also and always translated.” From this imagery, the translation becomes free to bend away from the original, experiencing distortions and derivations that expand the text while simultaneously participating in its influence, its intention.

This strategy becomes visible in Hedeen’s translation, particularly in the ambiguity of grammatical form. Consider this stanza:

In the second line, the word “hunches” plays between two parts of speech, having the motion of a verb and the weight of a noun. Such ambiguity prods at the enjambment, creating a cautious running over where the reader feels the pull of continuation yet is detained by the plurality of form. Because hunches’ double role is not present in the original, this moment adds a bend to the translation spiral, a new creation collaborating with the entangled confusion of the original. Just as Rodríguez Núñez knots and superimposes his images and memories, Hedeen superimposes grammatical structures, providing alternative tempos and phrasings.

Hedeen also reworks sound, allowing the English to assemble new resonances and new rhythms. In this vein, all sonic strategies combine and redistribute as Hedeen utilizes a range of devices that work together to create a new, sibling atmosphere in the translation. For example, alliterations appear more frequently in the English, creating a flexible partnership with Rodríguez Núñez’s ubiquitous meter: “marrow of the minor star,” “a mossy cloudscape / swamp molasses.” Rodríguez Núñez’s sound finds new shapes in Hedeen’s translation, the same motion but a different beat, “one interpretation over another, but never the same.”

It seems Hedeen’s approach to this translation is informed by the text itself which questions stability and comprehensiveness throughout. Setting the tone for Hedeen’s translation, Rodríguez Núñez minimizes his own authorship when he writes that “origin gets knotted at the crossing.” Hedeen’s spiraling and Rodríguez Núñez’s knotting merge to challenge the reader’s expectation for equivalency and sameness, promoting instead the productive and continuative role of translation.