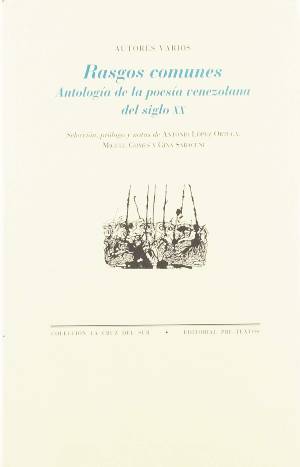 It is no secret that the news from Venezuela that reaches us nowadays is less than promising.  Political and economic crisis, institutional dismantlement, an impoverished population, and mass immigration of its citizens are just some of the problems that trouble this South American nation and keep the news agencies busy. However, the sad political, social, and economic reality of this country finds a symbolic counterbalance through its great literature; traditionally forgotten or barely noticed, both by Latin American literary and academic criticism as well as by that which occurs within the circles of North American and European Hispanic Studies. It is strange that the country of Andrés Bello and Símon Rodríguez, of Mariano Picón Salas and Arturo Uslar Pietri, of Francisco Rivera and Guillermo Sucre, should so greatly lack interpretations and readings of its own intellectual development. The same could be said for its leading figures in the fields of prose fiction and poetry, in which individuals such as Teresa de la Parra, Miguel Otero Silva, and, more recently, Eugenio Montejo, Yolanda Patín, María Auxiliadora Álvarez, and Arturo Gutiérrez Plaza, among many others, have stood out. I am aware of the arbitrary nature of the extremely biased list I have just made, but it is impossible to be exhaustive when considering a literature that has produced and continues to produce masterpieces—a literature to which critics owe a growing debt that will be difficult to settle.

Rasgos comunes [Common traits], the anthology of twentieth century Venezuelan poetry that concerns us here, decisively confirms what I have just said. I will go as far as to point out that few Latin American poetic anthologies so thoroughly cover the poetic production of a country over the last century, with authors who continue to stand out even into the twenty-first century. A book consisting of more than a thousand pages; its imposing presence is an undeniable testimony not only to the quantity of poetry written in Venezuela, but also to the imaginative prowess of many of its authors. All anthologies present the same “practical” problems: not all authors of the period or area they cover are included (though they do not have to be, precisely as this is considered a selection), and in general the criteria for inclusion or exclusion are not shared, especially with those which were left out. Such is the politics of anthologies, a problem that has no solution and one which amounts to an essential part of the genre. However, in this case, we can trust in the accuracy of the selection as we are dealing with exceptional anthologists: Antonio López Ortega, Miguel Gomes, and Gina Saraceni have achieved an exemplary effort. As they explain themselves in the section “Criterios de esta antología” [Criteria of this anthology], the inclusion of poets in the book is not owed to an illusory “irrefutable scientific exhaustivity” (an impossibility) but instead to a “justified criticism” that took place thanks to a “cordial debate” during which the most important criteria of all prevailed: poems which were “memorable for their aesthetic value” or for suggesting conflicts and debates within the cultural field of their time. Many of the chosen poems, as the anthologists mention, fall into both categories. On the other hand, each anthologist individually compiled their own list of poets to include; if one name was found on all three lists, it was considered a clear sign to include them. The critical debate between the anthologists began when they deliberated on names that had not coincided in all three lists.

In addition to the aforementioned criteria, Rasgos comunes was formed through the emergence of a series of five categories, which describe the most prominent discursive lines in the corpus of Venezuelan poetry. The anthologists call these categories “discursive areas,” which paint a portrait of the “Venezuelan lyrical system.” These areas are: 1) “The ethical challenges of modernity”; 2) “Cartographies of subjects and bodies: dissenters, the sick, foreigners”; 3) “The country between visuality and sonority; journeys and spaces of the homeland”; 4) “Poetic creation as construction of another reality; the becoming of language”; and 5) “Cultural displacements.” All of the poems in this anthology explore these areas in different ways and, on many occasions, simultaneously, creating a manifold field of meaning.

In this book, the discursive milestones of Venezuelan poetry span from Francisco Lazo Martí (1809-1909) to Luis Enrique Belmonte (1971). Eighty-seven poets in total, with titles ranging from “Silva criolla” (1901) by the former to “Compañero paciente” by Belmonte, who also practices medicine. The imaginary of Venezuelan lyrical discourse stretches from Lazo Martí’s “¡Libra tu juventud! El rumbo tuerce / de la fastuosa vía / en la que el vicio su atracción ejerce / y se tiñe de rose la falsía” [Free thy youth! The way twists / from the lavish path / in which vice wields its attraction / and deceit is tinted-rose] to that hospital patient of Belmonte who “comparte su pudín / y guarda bajo un colchón / trozos de pan negro y colillas de cigarros / para los días difíciles” [shares his pudding / and keeps under a mattress / hunks of brown bread and cigarette butts / for those difficult days]. It displays a verbal vitality embodied by classics such as Vicente Gerbasi, Juan Sánchez Peláez, or Juan Calzadilla, authors responsible for a discursive renovation bound to the most diverse avant-gardes and to the birth of the this country’s literary modernity. Other notable names are Eugenio Montejo, Rafael Cadenas, and José Barroeta; as the century continues, we find ourselves with names such as Márgara Russotto, Blanca Strepponi, and Igor Barreto, to then reach surprising voices such as those of María Auxiliadora Álvarez, Ana Nuño, Verónica Jaffé, and Eleonora Requena. On reading the poets included here, on discovering the place they hold within the varied panorama of their country’s poetry and their integration within this vast history that is poetry in Spanish, Rasgos comunes reveals to us that which we already knew and can now convincingly prove: Venezuelan poetry is a living, breathing body of diverse milestones where we can find all possible literary registers, from neo-Latin classicism to the diverse intonations of the colloquial, passing through modernism, the avant-garde, and certain experimental and lucid realizations accompanied by a contemplative and, at the same time, strange “earthliness” (as Eugenio Montejo would say). Nothing human is a stranger to this poetry, and within it are all the journeys, real or imaginary, that contribute to what we call the world or reality. We can only conclude that its vigor (oblique or direct) is the only way that this poetry can confront the political and social disasters that have troubled Venezuela for such a long time.

It becomes clear while exploring this book’s pages that Venezuelan poetry is still “Latin America’s best kept secret,” borrowing, as anthologists do, the words Álvaro Mutis spoke in 2004 in reference to Juan Sánchez Peláez. Books like Rasgos comunes will become, we hope, an essential contribution such that this secret should be guarded no longer, and poetry written in Venezuela might be disseminated as it deserves throughout the Spanish-speaking world.