No vivimos en vano / We Do Not Live in Vain by Selva Casal, translated by Jeannine Marie Pitas 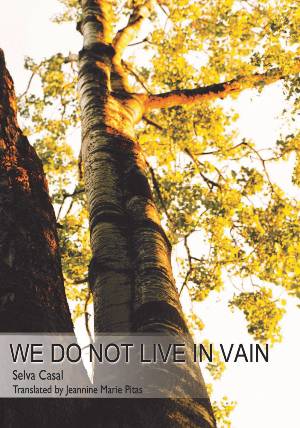 Selva Casal published No vivimos en vano in 1975 (Biblioteca Alfar) during the U.S.-backed military dictatorship in Uruguay (1973-1985). This was the sixth collection of poetry that the award-winning poet would publish, and she did so at her own peril “in a country of ten thousand eyes” (“en un país de diez mil ojos”) where surveillance, torture, illegal imprisonment, and “mountains of bodies” (“montañas de cuerpos”) quickly bled into the quotidian landscape. As a result of this publication, Casal, also a former penal lawyer, lost her professorship in sociology at the Universidad de la República. Over four decades later, we have the first English translation of this book thanks to Jeannine Marie Pitas, translated as We Do Not Live in Vain and published with Veliz Books in 2020. At a time when the role of the translator is further complicated by identity politics, it is crucial to underline that this work exists thanks to a friendship between Selva Casal, her family, and Jeannine Pitas, who has answered the call to extend the mantra of not living in vain, picking up where the narrative voice left off and ensuring we remember collectively: “I have barely enough memory for tomorrow.” We Do Not Live in Vain indubitably deserves to be remembered, discovered, and revisited in 2021 and beyond.

This exquisite book of poems is at once a testimony and a chant. It is, unfortunately, still a very relevant portrayal of the human condition and the atrocities inflicted on subjugated societies. As Pitas suggests in the Translator’s Note, we can almost hear this collection’s title as an affirmative communal response to the contemporary panorama we live in, currently made up of a pandemic, racial inequalities, and ecological crises. Although it may have taken some time for the poems in this volume to reach an Anglophone audience, they carry with them an aura of contemporaneity and urgency, and their anonymous nature renders them applicable to an array of spaces and socio-political dynamisms, or more poetically stated by Pitas, to a multitude of languages, cadences, and voices.

We Do Not Live in Vain is best qualified as vertiginous. Casal’s focal point alternates, often violently, between a view from above—vertical, dizzying heights—and the horizontally grounded space of men and death. In “Today My Eyes Fall, Shot by Guns” (“Hoy se me caen los ojos fusilados”), we can read:

The term “vertigo” appears four times in the collection, setting a tone of spiraling dynamism, a centrifugal and centripetal whirling, and a confusion regarding where to turn, as the etymology of “vertigo” (from the Latin vertere, to turn) suggests, from: “men biting their madness / their vertigo” (“hombres mordiendo su locura / su vértigo”) to “[…] the terror of falling / of losing my insanity / my joy” (“y el terror de caer / de perder la demencia / la alegría”). In the following passage also from “Today My Eyes Fall, Shot by Guns” (“Hoy se me caen los ojos fusilados”), Casal’s chiaroscuro setting bounces the reader from the moon to buried fossils, all from the omnipresent bedroom in which several scenes in the book take place.

ah! you don’t know the vertigo
yesterday while loving you
I saw a man in the grim half-light
teeth fossils moons
weeping suicides
I’m writing you this letter
and the world is collapsing
I don’t even know if we’ve died

The cyclicality of life—love, sex—and death becomes more of a destructive spiral in a collapsing not only of time and place, but of intersubjectivity and spectrality as well. Abounding antitheses collide in a similar fashion to the images of verticality and horizontality in Casal’s verse, where juxtapositions eventually bleed into each other due to a lack of formal punctuation; a contiguous imagery that is violent in both content and dynamism, where the reader is left on the threshold of these occasionally irreconcilable binaries. This space in between is the precipice where Casal’s magic begins, and the very location of poetry: “Poetry,” Casal reminds Pitas, “lives in the void between words” (“En el vacío existente entre las palabras está la poesía”). These interstices are the void into which the vertiginous subject gazes, and in which the reader is forced to dig for meaning.

The words and the void that binds them rhythm Casal’s liquid verses. Although all of the elements are present in her writing, the most pervasive and the one that informs both the content and the form of her poetry is water. Lyrically—in the classical sense of the genre—love becomes “an immense shipwreck” (“un inmenso naufragio”); elsewhere, “insurance policies are floating” (“flotan pólizas de seguro”); and the cyclicality returns as we hear and imagine the frightening juxtaposition of “the cries of the drowned / of the newly born” (“escuchando los gritos de los ahogados / de los recién nacidos”). It is primarily the “undertow” (“su resaca”) which influences Casal’s poetic flow: “I want the sea in my room / its undertow its absence / from this spiderweb I live in” (“Quiero el mar en la alcoba / su resaca su ausencia / desde esta telaraña donde vivo”). Casal’s rhythm is often ternary and without any punctuation, as in the following example of syntagmatic listing: “and never again could you evoke in me / the affliction of pencils offices contests” (y nunca más pudieras evocar en mí / la aflicción de los lápices oficinas concursos”). Pitas has intuitively caught onto this structure in her faithful, unembellished renditions of Casal’s poems. On at least one occasion, the English translation in fact further accentuates the triplicity usually present in the source text. In the poem “Listen to the Sirens My Love” (“Amor escucha las sirenas”), the original Spanish reads “Escucha cómo llaman / cómo gritan y aúllan las sirenas,” dividing the usual tripartite structure over two verses, whereas the English reads “Listen to the sirens / how they call they shout they howl”—a rendition, I would argue, more faithful to Casal’s rhythm than Casal herself.

I urge readers of poetry, in Spanish and English alike, to answer Casal and Pitas’ siren call, and to wade through the striking, even paralyzing poems of We Do Not Live in Vain. Be prepared to “awake at this incantation” (“desp[ertar] a este conjuro”) of a timeless book of poems that will not disappoint you—reading it will certainly not be in vain.