Skip to content
BOOK REVIEWS
Maneras de parar el mundo by Melissa Sauma
By Valeria Muñoz
A poetic text is strictly tied to the presence of a poetic voice that lies behind the ideological framework of the poem, and to a lyrical attitude that differentiates it from other genres. My approach to the poetry book Maneras de parar el mundo by Bolivian writer Melissa Sauma has brought to light a poetic voice that not only works in a symbolic, suggestive, and allegorical way, but also is capable of expressing itself through fine, velvety layers that gradually reveal its feelings, its needs, and its deepest aspirations.
Poetry 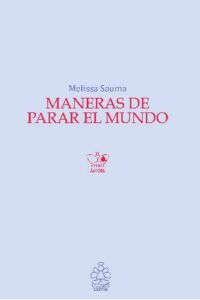 A poetic text is strictly tied to the presence of a poetic voice that lies behind the ideological framework of the poem, and to a lyrical attitude that differentiates it from other genres. My approach to the poetry book Maneras de parar el mundo by Bolivian writer Melissa Sauma has brought to light a poetic voice that not only works in a symbolic, suggestive, and allegorical way, but also is capable of expressing itself through fine, velvety layers that gradually reveal its feelings, its needs, and its deepest aspirations.
The poetic text is synonymous with creative freedom beyond the formal elements that characterize it. It is capable of expressing the transparency of the soul and elevating words to the sphere of the purest intuition and sensibility. In Maneras de parar el mundo, I have come to notice a noble commitment to the scenario that surrounds a poetic voice capable of abandoning the exterior in order to dive into the depths of her most intimate and personal ocean, and to do so with the simplicity of genuine creators. In each of these poems she tries to follow the trail of her own being, she is driven to abandon the exterior to succumb in the search for an honest, solitary, and patient voice in the face of all that is unresolved; in short, as the poet Rilke would put it: “…to turn to what life offers you every single day.” That is what this new voice of Latin American poetry does: it resorts to the ordinary, only to then turn the ordinary into poetry.

An image of a woman inside a cube states: “I have been a cube for so many years.” That was my first view of this poetic voice. That of the enclosed human being, burdened by the weights of the structured, by the suitcases that carry the life of meaningless papers: “How many things fit in that suitcase/ that my tiredness dragged through the faded streets/ to bear, to overload, to survive the day…” A voice tired of the “daily bureaucracies,” trying to stop being a cube. A voice tormented by the absurdities of everyday life. The only thing it wants is to forget everything: “I want to forget everything/ the polite smiles, the greetings of the secretaries/ the conversations in waiting rooms/ about the children and their future doctorates/ I want to forget each one of the small and endless daily bureaucracies.”

A being who questions: what are we in the vastness of the world? Perhaps nothing more than matter loaded with weights and credentials that tell us what we were, what we are, and what we should be: “marital status and number of children/ what they asked us when we applied for a loan/ on the first date at the first interview/ soccer team and political party…”

Fortunately, the burden pushes us to search and we stop being weighed down by bodies, positions and titles to long for: “the scent of the cedars/ the song of the crickets/ the silence of the rain.” We return to the essentials, we step down and stop believing that “the cubes were the only possibility.”

The human being strips words bare. Fish rain from the sky.  The rain gives no respite until it becomes sea. My second view of this book of poems unveils a sensorial storm. Strong and courageous images of a poetic voice that has entered the threshold of quests, has left the cube to travel towards words: “I search for the origin of words/ to discover a new language/ in everyday language/. Each word is a story, a myth, a journey (…) I strip words to the marrow/ I try to decipher what I say/ when I think I say something.”

I can identify a human who sees herself reflected in everyone else. I observe that the poetic voice appeals to the right to cry in the rain, to show her tears to the world: “I don’t want to cry in the corners/ under the stairs/ or in public bathrooms/ I want a heartfelt cry/ that cleans the previous cries.” And it is that cry that at some point becomes an ocean that leads her to weigh anchor and shed all the heavy burdens and cross the threshold of those who cast off their moorings and become sailors.

A lighthouse-woman, standing in the middle of nowhere. In the background there is only darkness. It is the time of gratitude, when the poetic voice has discovered its ways to stop the world and enjoy what has been given to us. Prophetically, she anticipated the global pandemic and built that epiphany Gabriel Chávez speaks of on the back cover of the book to incite rebirth and reinvention: “Just a pause to verify/ that each act has an echo/ that each inhalation of ours is in turn/ the exhalation of someone/ maybe a tree or a bird/ that we are the same being with different views and we are never the same after each interaction.”

It gives way to the healing power of the memory written in the body because we are the fruit of previous heartbeats that leave scars; we are several women in one, turned into lighthouses and voices. The body becomes an essential element of this part: a body to be grateful for, a moment to inhabit the measure of the body that embraces and allows us to “feel the pulse of the universe.”

The past has been left behind; what matters is to fly to the present in order to find a place in the world, a center that allows this poetic voice to learn to be in the essential. It is the choice of simplicity that reveals a self-knowledge with which to face the world. A voice turned into a kind of bird that has chosen simplicity to live and to tell. A voice married to itself in the most beautiful ritual ever seen, that becomes a child again to smile and write poems to the moon. That is the girl who writes from this created present to preserve magic: “There is a part of me I choose to keep always/ It is a girl who knows all the answers/ to all the questions I will plant someday…”