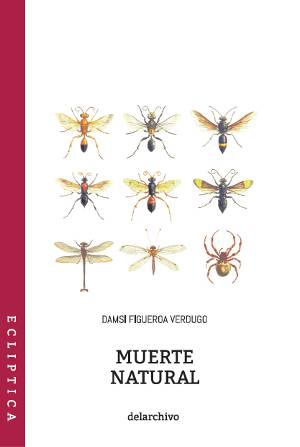 In Muerte natural (Ediciones del Archivo, 2021), Damsi Figueroa (Chile, 1976) seems to be striving for genuine aphorism by unleashing one of the biggest challenges in poetry—the force of an image reclaiming its own silence: “the ears perk up / to follow the rumor of the ghosts / foolish beings swirls / of insects and stardust mixed / into the antumbra.”

Her poem “Historia del hombre de Occidente” immediately reminds me of “Hombre imaginario” by Nicanor Parra. Both poems play with the underlying melody of the rhythm, and find, in my opinion, one of the typical traits of a true poetic voice: the natural intonation of phrases like irreparable fractures, imaginary shadows, that same pain in the poetry of Parra. In Muerte natural there is already a successful aphoristic quality: “He watched the clock / and, between two snuffed stars, / destroyed the world.”

Inevitably, one thing that caught my attention was this writing’s destructive alternation. First, it is, as you can see from the poem, relative. It does not have ambitions of existence; yet the poem imagines the abyss and assumes devotion. And it lives on in longing. This is a new difficulty born from its first virtue. I am alluding to the unchanging character of poetic voice: “If I find myself and say here I am, / poured into this dying chalice, then let there be no more mirrors / than I have eyes, and let me have no more eyes / than the cracks in the clouds.”

In 2003, Damsi published Cartografía del éter, and De visita en la casa del caracol in 2016. Nowadays, Damsi is a professor of literature and a specialist in Mapuche poetry. While her work has been translated into English, German, Catalan, French, Italian, and Portuguese, her relationship with poetry as art reveals that her work is serious and that we are in the presence not of an intellectual who produces verses, nor of an academic who combines aesthetic or epistemic styles, but of a creator with a personality journeying from memory to discovery of her innate senses. In April of 2002, when Marta Contreras—in the eighth edition of Revista Trilce—asked Damsi “What do you write? Why do you write? For whom do you write? Who do you read?,” Damsi answered:

I write the instructions of a plan for building an intangible sundial far from the moss and anacondas, but I wish to one day be able to write poems that express a harmonic balance between light and rhythm […] One day I write to not die. The next day I don’t write, but I dream of a poem. The third day, something else happens. When I want to answer this question, I ask myself another: who would I be if I didn’t write? And I come to think such strange things, like how I write because poetry calls to me to kiss its feet, and I listen. I write. I do not write for anyone / although I try to escape and avoid taking you to the dance / your juggling and pirouettes always demand a thunderous applause / that is to say, a word. […]

Just this brief example of Damsi’s poetry is enough to consider her one of the most outstanding, expressive poets in Chile today, especially if we set aside Muerte natural for a moment and go back in time to explore Damsi’s poetic origins. At a young age, she came into direct contact with the poetic thinking of her environment, which included names like Gonzalo Rojas (Premio Cervantes 2003), Alexis Figueroa (Premio Casa de las Américas 1986), Omar Lara (Premio Casa de las Américas and Casa de América, 1975 and 2007 respectively), and Alejandra Ziebrecht (Premio Mejores Obras Editadas, Chile, 2001). Indeed, Damsi’s first publication, Judith y Eleofonte, appeared in 1995, immediately signaling the appearance of a poetic voice reminiscent of the most human Gabriela Mistral. Certainly, beyond the mythical references and syntactic choices of Judith y Eleofonte, including the images invoked and the strict judgment of the predominant aphoristic elements of Muerte natural, both Judith and Eleofonte seem to be the performative excuse for developing the verse that reclaims its silence: “The delicate mirror of her Purity.” Of course, the rest of the poem preceding this culminating verse not only boasts extraordinary execution, great velocity, and a sense of rhythm, but also reveals a creative spontaneity that always seems to find its natural home, so to speak: its non-existence. Or, in the last case, the total unawareness of its existence. It is a spiritual poetry whose relationship with words as signs, as substance, could only unravel in the poetic knowledge of its own creator, Damsi Figueroa. The aphorism is a path already carved; aphorisms remain to see the effects of their global cultural inclusion and influence, which is already being exercised in written novels.