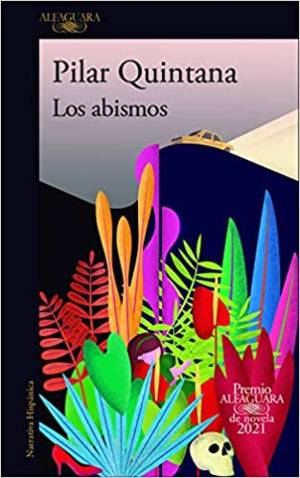 A dish should not be served with any elements that are purely decorative. The rule is that everything should be edible and each element should have a function within the whole. Adornments exist in neither gastronomy nor literature; everything fulfils a narrative function. The gray sky is present in the novel because it symbolizes the feelings of the characters or indicates an imminent turn in the plot. The existence of the clouds, and their color, should have the same function as the chocolate chips on the dessert plate: they seem superfluous but they go with the pastry.

In Los abismos, the plants that “stretch to touch me with their leaves like fingers” convey the mood of Claudia’s mother: the savage violence and monotony, the fractures in the marriage and the “rhinitis” which keeps her in bed for weeks. The setting is not an adornment but rather a fundamental aspect of the novel. The same is true of The Bitch, a story which could have taken place on the periphery of Bogotá without considerable plot changes. But the jungle, the sea that took Nicolasito, the biblical downpours and the serpents relentlessly trap Damaris like a noose steadily closing in.

One of the most notable differences between the two novels is the choice of narrator: The Bitch is narrated in the third person and Los abismos in the first. This is one of the big chances it takes: narrating from the perspective of eight-year-old Claudia. It’s a challenge involving meticulous, probably exhausting work to craft the phrases. The voice is not only convincing, but also brings to the novel a growing strength as the plot advances:

“I was talking. I was telling my daddy things that were happening at school. He was listening and laughed at the right times. I was asking him important questions, and superficial ones too, about life, the universe and nature. He would think, give me his answer—always on time—or he would say he didn’t know and would go quiet. I started to think that the deaths of my father lived in his silences, as if drowned by a calm sea.”

The elements Quintana weaves together create a dense and beautiful novel. Another of her accomplishments is the way in which the settings and climate reflect Claudia’s internal world. For example, at the country house, the fog surrounds her like the jaws of a wolf, the rain lunges at the mountains, the spirits of Viruñas scratch the roofs at night and Rebeca’s ghost wanders through the house—this scene depicting the terror of a little girl who must watch over her mother so that her destiny does not become that of Gloria Inés, Karen Carpenter, Princess Grace, or Natalie Wood.

In literature, the shorter writing is the more substantial it becomes—unlike sex. The scenes of Los abismos are a good illustration of this: “You couldn’t see the kitchen from where my dad and auntie were. From where I was you could. Gonzalo and my mum were talking and laughing; they raised a toast and looked at each other for a moment in silence. He, who was facing the door, saw me and said something to my mum. She left the kitchen with her wine glass in hand, acting all grumpy when she couldn’t have been happier.” Nothing else is needed to suspect what is happening and what will come next.

Damaris and Claudia lose their childhood at the same age. In Damaris’ case it is through Nicolasito’s accident; in Claudia’s it is through the collapse of her parents’ marriage. They abandon their childhoods and head towards complex and difficult lives. In The Bitch we come to know Damaris’ life through her adoption and care for a puppy. Although we do not see Claudia’s future, we intuit that it may be similar to that of her mother, with whom she shares her name. Allow me to make an aside here: I am among those who believe that names bring along with them their own destiny. The fact that mother and daughter share a name here suggests that Claudia is doomed to perpetuate her mother’s life.

The destiny of the two women with the same name is close to that of Damaris, despite being separated by social, chronological, geographical, economic, and cultural differences. It seems their dreams and projects do not matter, nor where they were born, because they are predestined to entrapment and frustration. This is possibly the reason they are drawn into the abyss: “I walked this way, at first hesitantly and then with resolve. I wanted to look at the abyss again, feel it delicious in my stomach, and fear, the desire to jump.” Further on: “So I looked it in the eyes. The abyss inside of her, same as all the dead women, as Gloria Inés; an endless crack which nothing can fill.”