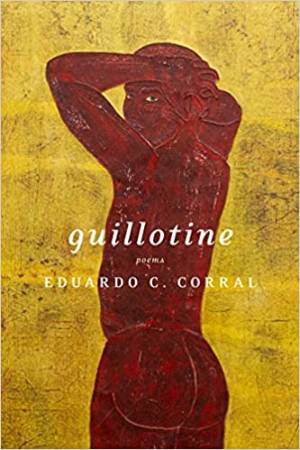 Eduardo Corral’s second book, guillotine, longlisted for the 2020 National Book Awards, is a collection of poetry that sings: “viva mi Sinaloa/ vivan los mojados.” Captured within guillotine’s desert dreamscapes is an anxious feeling of wavering between worlds, referred to in Mexican philosophy as zozobra. Corral evokes ambivalence and disintegration as he deepens his inquiry into Chicanx identity by examining perilous migrations through the Sonoran Desert. In contrast to his first book, Slow Lightning, which maintained a single, self-deprecating speaker, guillotine is a polyphonic collection that gives voice to a diverse cast of border-crossers. What emerges through the tensions within and between these voices is a provocative and original exploration of the borderlands, both as a place and an existential condition—one that is disorienting, often brutal, and sometimes shockingly beautiful.

As Gloria Anzaldúa and other Chicanx scholars have pointed out, the border is not just a geographical location but something inside the hearts, minds, and even bodies of mestizos, those who are descendants of both the colonizer and the colonized. The border thus represents the “in-between” position, what in nahuatl or Aztec philosophy is called nepantla—a space of social disintegration and opportunity, offering the possibility of transcending binary limitations and rigid colonial paradigms of identity. On these shifting sands of nepantla, we experience the unsteady feeling of zozobra. Indeed, some philosophers have argued that the condition of nepantla and the feeling of zozobra are the central organizing traits of Latinx identity.

In guillotine, the disequilibrium of zozobra arises as an ambivalence between dichotomies such as submission and dominance, dread and desire, violence and pleasure, religion and sacrilege, the U.S. and Mexico, self and other. One speaker, teetering ambivalently on the border between disgust and hunger, confesses: “When I read his flesh fell/ off the bones, my stomach rumbled, my mouth/ watered.” Corral previously explored ambivalence in the contexts of sin, punishment, and Chicanx queer identity using a BDSM lexicon, with words like “obedience” and “master,” and the symbol of the serpent. Here he invokes the symbol of the scorpion as he examines the tense and often violent dynamics within and between border-crossers: the migrant, the narco, the coyote-smuggler, the border patrol agent. In the title poem, the speaker clutches the mattress in ambivalent anticipation of intense sensuality and violence while scorpions crawl on his skin and run a razor blade down his body, teasingly—mirroring the torture and extortion of narcos, who, like scorpions, are a source of awe and dread in Mexico.

Zozobra also arises in guillotine in response to depictions of violent disintegration in the borderlands, where the self comes apart and a new concept of wholeness emerges. Body parts litter guillotine’s desert, with the title itself connoting decapitation. The most violent disintegrations are rendered passively, with the subject, or perpetrator of the violence, omitted. Some speakers, however, commit violence against themselves, and in these cases the subject and object are often conflated in a kind of self-destruction. For instance, one speaker calls himself “worthless” and pinches off a mole from his skin. Some instances of self-harm, however, extend to include family, such as the speaker whose mother hated his “Indian face,” and who then perpetuates this violence against his own child, noticing “for the first time,/ the hideous shape/ of his nose.” This internalized violence represents an ambivalence towards self within the mixed-race speakers, where the border disintegrates between the European and the Native American, as well as represents an assertion of control and agency in the face of disintegration.

While zozobra arises from guillotine’s content, it is perhaps in its form that the text has the most disorienting effect, as the reader travels along staggering stanzas and weaving lines that mimic the journey of migrants lost and delirious in the desert. Interspersed throughout the collection are also a handful of dizzying free association poems. One such poem, riffing on the border experience, reads like a captcha: “chinga tu madre gringo™/ BUILD/ hey illegals ICE/ THE WALL STOP DRUGS/ is coming/ bidi/ I ♥ brown A$$,” with the printed words physically overlapping, blurring, shifting in font and style. The movement of guillotine’s form, the movement between speakers and between languages, and the ambivalent wavering and disintegration in the content, all work together to capture the discordant, disorienting experience of moving between worlds in the borderlands.

guillotine is at its strongest at the Mexico-U.S. border, exploring migrant perspectives, as it does in a group of polyphonic poems titled: “Testaments Scratched into a Water Station Barrel.” Only for a few poems does the collection feel off-key, primarily when Corral jumps continents to Spain. Despite occasional shifts away from its central themes, guillotine offers a penetrating and unique exploration of the borderlands, where the reader is unmoored from familiar and reductive colonial paradigms. Although the disorientation that arises from its zozobra-inducing images confronts us with brutality and meaninglessness, the text’s recurring wedding imagery offers the hopeful sense that in the uncertain space of nepantla, there is the possibility of integration and transcendence. In the borderlands, where Nuestra Señora de la Santa Muerte, both beautiful and grotesque, reigns, such integration is not only possible but necessary for survival.