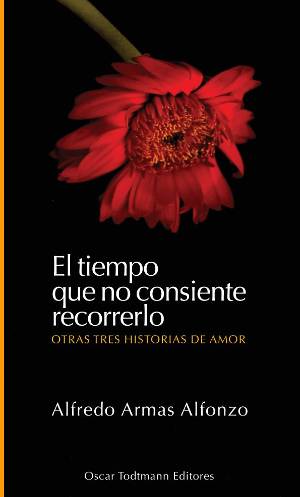 One hundred years after the birth of the author and thirty-one after his death, it is once again possible to read a new book by Alfredo Armas Alfonzo. A book of few pages and sufficient qualities to form part of the corpus of Armas Alfonzo. This is no mean feat, given that said corpus constitutes a legacy emblematic of the highest qualities achieved by Venezuelan fiction, in terms of the concordance between the skill, innovation, and writing of such an emphatically distinguished world. So even a short passage of such magnitude has the right to, if not the privilege of, a reading in accordance with its verbal strengths. That is to say, a reading that is able to tune in to the ability of his three texts to impact the reader in a way that is both confirmatory and revelatory.
The Time That Does Not Bear Remembering: Three Other Love Stories, as the title of Armas Alfonzo’s new book might be translated to English, was recovered by Edda Armas, the author’s poet daughter, from one of the folders where he liked to keep his last works. It was published by Oscar Todtmann Editores in Caracas, in partnership with the Foundation that bears Armas Alfonzo’s name and in commemoration of the centennial of his birth. And it is accompanied, on the one hand, by the analytical “Foreword” that Carlos Sandoval provides to those interested as a map of his own journey through this trio of stories, and as a prudent reminder of their shared borders with other regions of Armas Alfonzo’s written world. On the other hand, the slim and fittingly designed volume ends with an “Afterword” and a “Chronology” compiled by Edda Armas herself to tell the story of how the original manuscripts were recovered, and to document the main personal and professional milestones of the sixty-nine years lived by the author, her father.

This first step into the inner workings of such a book intends to point out the most obvious and, at the same time, the most endearing thing: the borders shared by this book and the other areas of Armas Alfonzo’s whole oeuvre. The four words of the subtitle (Three Other Love Stories) draw the line of separation (and obviously also of reconciliation) between his previous stories (now also “others,” but in their own different and surprising way) and these more recently published ones that are both set apart and, at the same time, inextricably linked by declaring themselves to be others. The tacit precedent, and now justified reference, is the volume Every Thorn: Three Love Stories, published in Caracas by Monte Ávila Editores in 1988, designed and with invaluable and captivating illustrations by Claudia Leal. However, what is in the contents pages of these two books, and what do their respective border narratives entail? The three stories collected in Every Thorn are: “The Sprig of Bougainvillea,” “The Bitter Melon Girl,” and “The Foreign Rose.” Conversely, the titles of the trio discussed in this review are: “The Still Flight,” “Lovesickness,” and “The Sacred Light.” What, and how extensive, are the similarities and differences between these two short narrative ensembles?

The first text of The Time That Does Not Bear Remembering (“The Still Flight,” divided into three “acts”) has in the city, which is not named but is clearly distinguished through contextual details as being Caracas, its empirical frame of reference; and people from an urban location spread over at least Caracas and Buenos Aires as characters. The second story (“Lovesickness”) is formatted as later annotations in a private diary, and in its instances of situational and argumentative succinctness, the urban character is made even more explicit and varied in its settings and interactions. And in “The Sacred Light,” the setting is provincial, rural or rustic, the most striking feature of the bond between the two central characters being the almost conflicting difference between their statuses, hers rural and youthful and his urban and mature. And what are the contextual choices and characterisations specific to Every Thorn? It is not necessary to outline them one by one as has just been done with the new book. It is enough to emphasise that the first two of these three previously published love stories are intertwined with the rural world and the child-adolescent stage of life, while the last one (“The Foreign Rose”) takes a step towards the urban and modern dominance in context, as well as towards the experienced adulthood of the character telling their love story.

From this perspective, what then do the “three other love stories” that make up The Time That Does Not Bear Remembering contribute to Alfredo Armas Alfonzo’s legacy? In a first and very broad example of appreciation, this trio remains at the highest level of achievement as the author’s most expansive narratives, and thereby less representative of his short stories which, like the pivotal works The Ossuary of God (1969 and 1996), have earned him recognition as a forerunner or pioneer of the short story in Venezuela. They expand on how the experience of love is handled, as depicted in This Remnant of Tears I Have Left (1987 and 2005), his short and only novel. And, perhaps finally, they consolidate the clear correlation between a rather large number of stories, a construction of the speaking character’s identity with features that are frankly analogous to some of the most salient features of the author’s biography, and the widening of the modern city’s scope for contribution to Armas Alfonzo’s narrative.

As the years passed and he grew closer to the end of his life, the world created in Alfredo Armas Alfonzo’s endearingly oralized writing also moved a long way. Progressing from the archetypal rural world that for the most part still characterises him, to the framing of himself, the writer, as both character and origin of situations motivated by modern city life.