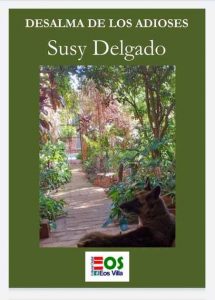 When reading Desalma de los adioses by Susy Delgado, we are enveloped in an experience of the image, revealing to us another form of reasoning in the elements of nature which we use to access emotion. These elements acquire form or sensation and we begin to perceive (from the standpoint of matter) their sensory aspect: the perhaps natural sign of awareness in a space that is imagined and at the same time “cognitive.” Everything from this point transcends from the sensory to the rational, and emotion is later unfolded as a fragment of thought. “Autumn,” “spring,” “winter,” or “summer,” for example, are not signifiers, but rather denote (show through their meaning) what is already known.  They demand that we discover the distinctiveness and plural meaning of the word, and by following these other meanings encounter its otherness. In this way we achieve a sensation where the object is in doubt, as long as the real no longer exists, and in its place is the experience of a subject that perceives an image and its symbolic development at once. Words reveal themselves through reason, and this in turn will be the way we imagine longing, the sensible, nature, and the pain of the imperceptible, given that the reader will remain limited to the sensitivity of that voice. Not so much restricted, but seduced to excitement in the discovery of song. A voice that becomes soul, that structures itself into another feeling through which the “poetic detour” is reproduced. That is to say, the voice becomes separated from the real while not losing sight of poetic construction, together with the reader. It crosses other meanings to return to an instance of the landscape with which the poem approaches its own cadence: the wind, the afternoon, the tireless pages of being, the indecision of time, the unfathomable, and distance. Its lush register, above any objectification of this landscape, attracts us to the center of the poem when our body becomes insatiable in the face of that image: “A pandemic of inclement foul winds / a pandemic of the elements / of farewells to orphanages / of cruel truths / of diluted words.” A poetic fading takes place when, by revealing another reality, one gives way in the face of uncertainty: turning back into the guise of the unknown, the inevitable, the unforeseeable, and fleeing through the skylight into the clouds. This process demands from the reader the effort of revealing the meaning of the poem. At the end of the day the reader will fail, because in this effort we cling to the unconscious of the verse that is intangible to what is named.

And that which is “named” belongs to the unconscious state of the soul: from that otherness felt in the tone and the song of the poem. It is song because it endeavors for that nature to which it belongs: the territory of the Guaraní. This song of another that takes root in my own feeling, by means of which we discover ourselves inside the rhythm, and above all, we find the poem’s fortitude: spilled over in myself and gaining cadence in the moment that the Guaraní language looks to belong to me or, for more conceptual reasons, organizes itself in the linguistic notion of the reader. The poetic construction doesn’t expect that this reader imagines themself a translator of feelings. No. On the contrary, there is another reason: the sensible, feeling and the vantage of emotions when they are written. If I read, I still feel the candor of that relation with another strange tongue by means of which that ontology begins to belong to me. I insist, it is the structure of her song that orients me towards the doors of another reality. In the poem “El Túnel,” the verse “And in this black tunnel” is reiterated through the text to display the tone and the use of this resonance as a syntactic domain of the written convention of the poem. Nevertheless, I exist if the verse exists.

Over the course of the book, Delgado molds her adherence to this poetic instrument, ensuring that the poem isn’t “deaf.” So much so that in the beginning of the book the rhythm encircles us in the versification of that landscape: “The summers / If time is alone / an illusion of being human / where will the summers have gone? / that invaded those soft dresses / intensely light / what our longing sketched.” The landscape is then an abstraction where the spectator’s frame of reference fades away, creating with their memory a residue of that sensation. Here, let’s say it once and for all, the landscape is the scenery of that atmosphere in which we unfold otherness, as I have said, outstretched in the tone of the languages that converse in their still double representation: “GLOSSARY: Mborayhu jeroky / ipotyjera jevýva / pyhare pypukúpe: the love dance / that blossoms anew / in the deep night.” Always in the semantic dichotomy of love and shadows that confer the representation of emotion. And Guaraní positions itself at the same level as the reader. In this way the imagined exists in the coverage of that feeling by the other. I must consider that the time of the poetic moment is intangible and untransferable to any other reader, who separately constructs the image and consequently their own rational exercise.

When approaching the image, our author takes the oath of metaphor, personification, and what’s more, an adequate use of adjectivation: “The old and sweet tatatina / that usually had a page / of rejuvenating pure laughter / spreading the dew of life / has come and appeared during the days / of an August that withered away.” The Paraguayan poet knits a narrative seat of honor that she then grants to language, with the expectation of recounting its manner of coming face to face with reality. And the reader feels gratitude, since we are surrounded by the context of the poet who enunciates us, her world, and the sensation of that reality. And it is this world that comes to life, at least for me, in reading. We inhale the symbolic force of signs, love, desire, friendship, and in the end, the representation of a new landscape that takes its form through the reader. The sensation is, in this way, the product of the intellectualization of emotion, now made into words. For this reason, it is comprehensible to the gaze of the reader. Words are sensations.