Skip to content
BOOK REVIEWS
Contra Natura by Rodolfo Hinostroza
By César Ferreira
The publication of this bilingual edition of Contra Natura (1971), by poet Rodolfo Hinostroza (1941-2016), deserves the highest praise, as it brings the work of one of the most important Peruvian poets of the second half of the twentieth century to an English-speaking audience. Hinostroza was part of a noteworthy generation of Peruvian poets of the 1960s, which included Antonio Cisneros, Javier Heraud, César Calvo and Luis Hernández, among others.
Poetry 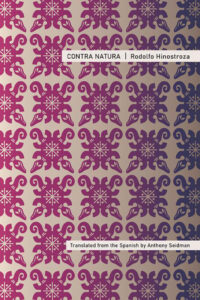 The publication of this bilingual edition of Contra Natura (1971), by poet Rodolfo Hinostroza (1941-2016), deserves the highest praise, as it brings the work of one of the most important Peruvian poets of the second half of the twentieth century to an English-speaking audience. Hinostroza was part of a noteworthy generation of Peruvian poets of the 1960s, which included Antonio Cisneros, Javier Heraud, César Calvo and Luis Hernández, among others.

The poets of the Generation of 1960 prompted more than a simple rupture with the traditional poetic practices of that period. They abandoned the metaphor inherent in the Hispanic tradition in order to prioritize the use of image as an essential part of a complex critical-reflective system, in the style of T. S. Eliot and Ezra Pound. To their narrative quality of verse, we can add their critical revision of history, as well as a reactivation of mythical or traditional figures. They engaged in all of this without losing sight of the turbulent historical context of the times in which they lived, namely, the Cuban Revolution, the student protests of May 1968 in Paris, and the Vietnam War.

We can discern several of these aesthetic and thematic premises in Hinostroza’s first book, Consejero del lobo (1965), which fully mature in Contra Natura. In this latter book, Ezra Pound’s and Saint-John Perse’s influence are clear in Hinostroza’s use of long verses and intense metaphorization. Additionally, Hinostroza’s cosmopolitan inclination comes through in his use of references from the Western tradition—the Bible, Latin poetry, and Shakespearian theatre, for example—to then examine the important events of his day and age, and to evaluate the vicissitudes of the human condition. With this I am referring to the crisis of totalitarian power, revolutionary struggles, the Hippie movement, or the use of modern technology as a driver of a new form of economic exploitation.

Contra Natura is a disturbing book that is full of surprises. The work is a product of a unique grammar and a complex system of signs that creates its own semantic field. Nonetheless, the volume owes its novelty less to an avant-garde spirit than to the author’s bet on a radically free language, which aspires to reach new expressive horizons through the construction of a solidly poetic “I.” A prime example in this sense is “King’s Gambit.” The poem takes place in the present, during a chess game, and in the here and now of the poetic subject’s personal history. It moves from the protagonist’s sensible game plan to a reflection on destiny—in other words, it moves from the personal history of the poetic speaker to History itself. From the start, the poetic “I” reveals his rebellious and nonconformist attitude toward his immediate reality, but a while later, he loses the game. His defeat leads him to realize that he took a wrong turn in life, just as History lost its way. In this regard, he says with furious disenchantment, “Goodbye fucked dreams, goodbye your pulse, / brilliant carver, / the homecoming means nothing, the miserable communion of the heavens / like anything else that has ever occurred” (17). And although he now knows that the existence he was destined to live is defective, he will play a new game, but this time with his newly gained knowledge in his pocket; all because, “a game / is just a game. The human species persists / in errors / until there comes forth / an incessant aurora / outside the magical circle” (21).

The poem “Imitation de Propertius” suggests a reflection on another seminal theme in Hinostroza’s work: the barbaric nature of power. If, in this book, the struggle between the purity of poetry and power, between social change and corruption, is a recurring subject, the speaker in this poem is clear about where he stands. This declaration of intentions is clear from the first lines: “Oh Caesar, oh demiurge, / you who live immersed in Power, allow / me to live immersed in the word” (31). The poetic “I” is hardly interested in singing the praises of power, because he knows from his own experience that “in its nature there is something malignant / for now and forever” (41). Instead, he prefers to take refuge in the harmonious utopia offered to him by Azucena’s free love. In fact, Caesar and Azucena are opposite characters: if the former is a dictator with a repressive system to keep his tyranny alive, Azucena, on the other hand, is a symbol of redemption. Finding himself in the middle of these opposite poles, the poet finally decides to redeem himself in the arms of his beloved. He writes: “Don’t dispatch / your terrorists to persuade me to sing your famous repressive continuum / for tonight I shall lie between Azucena’s thighs” (35). And later he adds: “no longer the story of Power but of harmony / millions of utopists march silently… / maybe we will reach the other edge / the sea has withdrawn and Azucena / awaits / tireless and lithe lover” (45). All of this, clearly, is but a vision, an act of faith that takes shelter in the critique of absolute power in order to defend both the world’s ethics and its aesthetics. Nonetheless, these references are not gratuitous nor far off, because if Caesar represents absolute power in Rome, associations or anachronisms allow Hinostroza to signal the political identity of the present—of the 1960s—with its own abuses of power and its own strongmen.

It is worth highlighting that, in addition to the eloquent orality and ambitious narrative of Contra Natura’s best poems, we find a consistently adept intertextuality. This appears through the insertion of English, French, or Italian words and verses through which the poet pays homage to tutelary poetic figures such as Dante, Shakespeare, Shelley, Whitman, and Pound. The poem “Aria verde” is one of the best examples of this.

Additionally, the first-time reader of Hinostroza’s poetry may be confused by the peculiar use of mathematical or other kinds of signs that appear throughout the book. For example, mathematical formulas are linked here to pure beauty and a circumference is tied to the idea of a perfect love and world harmony. As we read in “Origins of Sublimation”: “with your eyes you shall gaze upon it, with your hands / you shall touch it / and it will assume a shape / love makes visible the invisible / and makes invisible the visible… / the fountain of youth / which doesn’t age” (73).

Few poets writing during the 1960s knew how to read the historical circumstances in which they lived as well as Rodolfo Hinostroza. In doing so, he built a luminous bridge between the ethics and aesthetics of his verses. Once again, we acknowledge this stupendous bilingual edition of Contra Natura, elegantly and skillfully translated by Anthony Seidman. Reading this edition offers its readers the possibility of discovering an innovative poet with an exacting use of poetic language—two indispensable characteristics of an important artist in contemporary Hispanic poetry.