Skip to content
BOOK REVIEWS
Imagen de Jauja by Edgardo Rivera Martínez
By Carlos H. Hurtado Ames
Edgardo Rivera Martínez (1933-2018) is known primarily for his short fiction and the important novels he left behind, including one of the most important pieces of contemporary Peruvian literature, País de Jauja (1993). Nevertheless, Rivera Martínez was also an accomplished essayist, as is evidenced, for example, in his meticulous studies of travelers and their voyages through Peru, or the anthologies he compiled on Peruvian regions, such as Trujillo, Arequipa, or the Peruvian Amazon.
Nonfiction 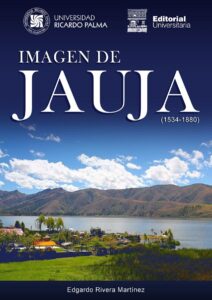 Edgardo Rivera Martínez (1933-2018) is known primarily for his short fiction and the important novels he left behind, including one of the most important pieces of contemporary Peruvian literature, País de Jauja (1993). Nevertheless, Rivera Martínez was also an accomplished essayist, as is evidenced, for example, in his meticulous studies of travelers and their voyages through Peru, or the anthologies he compiled on Peruvian regions, such as Trujillo, Arequipa, or the Peruvian Amazon.

Imagen de Jauja falls within this second area of work; however, this book has a unique spirit that differentiates it from his other essays. It is a review of everything that had been published about Jauja up until the 1960s, be it the city or the former province of the same name, from the pre-Hispanic era to the end of the nineteenth century. Rivera Martínez’s work is informed by his comprehensive investigation in Peruvian and overseas reference libraries, and his exhaustive archival research. Generally speaking, this volume is different from the anthologies he would publish later because, in this work, Rivera Martínez does not simply gather data. He also presents interpretations and critical readings of Jauja’s development and its significance in Peruvian history.

The volume begins with sixteenth-century perspectives of Jauja’s landscape as viewed by early chroniclers, such as Pedro Sancho and Pedro Pizarro. Here, he highlights the impression the land had on the first Spaniards who came to Peru, which, in the end, played a fundamental role in the decision to establish a city in the region. The next chapter focuses on descriptions of the native ethnic groups inhabiting this part of the central Andes, according to the chroniclers’ reports and early administrative documents, such as the Descripción de Xauxa. It is worth noting that although the author characterizes all pre-Hispanic groups as “huancas,” which was the commonly used name at that time, we are privy to the existence of additional groups in the evidence Rivera Martínez gathers, primarily of “xauxas.” We can also discern their prevalence during this period, as well as the political fractures among the ethnic groups. Today, most scholars within academic circles accept this image of the groups.

The section discussing the legend of Jauja is one of the most important parts of this work. Here we discover why Jauja became known as a land of unparalleled riches, synonymous with wellbeing and happiness, which eventually led to phrases referring to a paradise or a type of Eden, such as “isla de Jauja” (island of Jauja), “vete a Jauja” (get to Jauja), or “país de Jauja” (country of Jauja). According to the evidence Rivera Martínez presents, the idea of Jauja as an idyllic dreamland was based on the real Incan citadel, Hatan Xauxa, and all its glory, including its replica of the Coricancha palace in Cusco, which astounded the Spaniards. In addition to all this, communiqués regarding the royal fifth destined for the Spanish crown that were signed in Jauja—the initial capital of the nascent Spanish government—led the Spaniards to perceive Jauja as a place of unlimited resources.

This is one of the most important analyses to date on Jauja as a Spanish city and the first capital of Peru. While Rivera Martínez discusses the figures involved in the city’s founding and the reasons for its short-lived status as the capital city, he also considers the implications on Peruvian history of moving the capital to the coast in 1534. He suggests that if Jauja had remained the capital, for many reasons—geographic, historical, telluric, and human—there would have been greater participation of indigenous people in the development of what would become Peruvian identity and in the design of a genuine destiny for Peru as a nation.

The colonial period is one of the least documented in the history of the Peruvian central Andes. Nonetheless, Imagen de Jauja presents an array of references to the region in existing colonial chronicles. As a result, this work is an invaluable resource for characterizing the region during this period, and based on this research, we can deepen our exploration of other themes and processes. We can say the same about the pages the author dedicates to Peruvian Independence from Spain. Still, we should note that Rivera Martínez’s primary interest is the protagonists’ characterizations of the region and the impact its landscape had on them.

The landscape’s impact is latent in the descriptions Rivera Martínez compiles from the nineteenth century. Although his emphasis rests on Jauja, the observations the author gathers also cover a large part of the Mantaro Valley region. The nineteenth-century drawings Rivera Martínez includes in his work are noteworthy, such as those by European traveler Léonce Angrand, which were unpublished in the 1960s, or those of Charles Wiener. The author also introduces translations of stories told by travelers who passed through Jauja, and who left behind valuable testimonies of the cultures they observed, as is the case of J.V. Tschudi, for example, and his notes on the region’s festivals during the first half of the nineteenth century. Such observations had not been translated into Spanish previously.

As a comprehensive overview, Imagen de Jauja is a valuable work in terms of the history of Jauja as a city and a province, and of the central Andes in general. The interpretations Rivera Martínez offers allow for an integrated understanding of the Peruvian national process from a regional perspective. In this way, the volume and the author’s proposals essentially highlight an inherent process in Peruvian history.

The first edition of this work appeared in 1969, edited by the Universidad Nacional del Centro del Perú. The Universidad Ricardo Palma’s reprint of the work is a great contribution. Rivera Martínez noted in his prologue that he undertook this work given the affection he always felt for the land and landscape of Jauja. This sentiment defines the trajectory of both his academic and literary work. Further, we could say that the seeds of the vast imaginary Rivera Martínez developed years later in his fictional País de Jauja can be located in this meticulous study. In any case, this second edition of Imagen de Jauja once again brings to light Jauja’s fame and that of this notable writer who, as a researcher and novelist, dedicated his life to writing this city into the contemporary Peruvian imaginary.