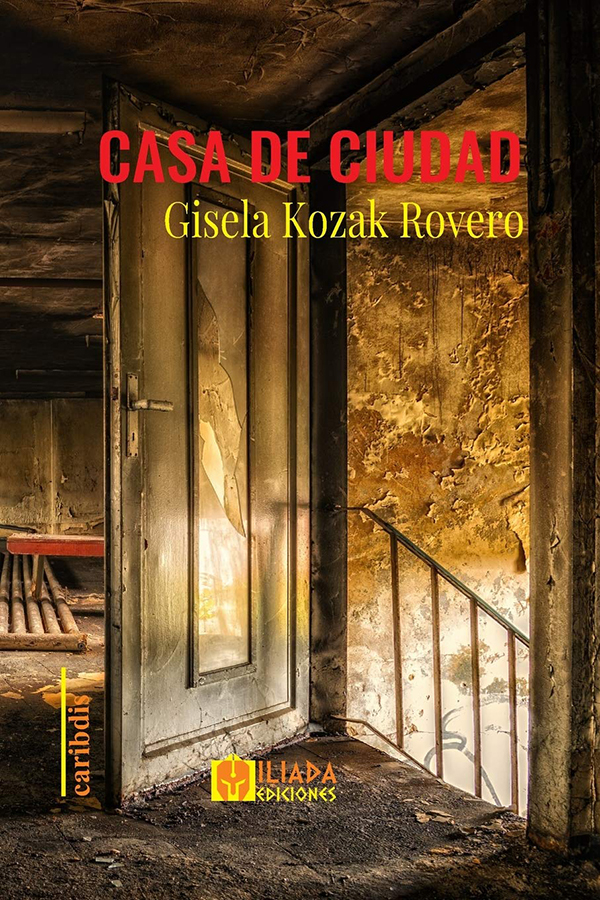 The cover of this book—sporting an image of an open door amongst ruins, and a play on words—has a certain look to it which attracts us immediately. Two words, which appear to belong together as they are joined through the proposition “de” [usually translated as “of” or “from,” depending on the context], differentiate and connect that space which they frame. The house, a symbol of isolation (which we can live inside of), as the most private and isolated space, is united with the city, the zone of the public, where every space is shared and visible. This title is the starting point of this short story collection by Gisela Kozak Rivero—what, then, does it mean? Casa de ciudad (2021) is, unquestionably, a space where the hybridity of existence, in two places, is transferred from one ground to another, departing, in addition, from the material to the corporeal, to become the context of those who live two realities in one and the same body, materialized and urban.

Here, the house in ruins becomes a symbol of identities that have been destroyed by injustice, inequality, incomprehension, and dislocation. In each of these stories, the main characters detail with subtlety everything that causes their most profound and silenced pains. Before each experience detailed in their stories, we’re given an epigraph to read, which establishes the first connection between the reader and the suffering character. A quotation from Rafael Arráiz Lucca—“Al fin termino por entender que yo amo esta ciudad hasta la rabia” [“I finally understand that I love this city to the point of rage”]—opens up onto this place where “habitar” [to inhabit] means to connect the most profound of feelings, like the love of music, or sadness. This permits a closed-off place, like the house, to create a bridge by means of a concert, as a symbol of union with public space, back to the city. In this way, a shared space, like a stage, closes the gap by means of the connection between melodies and memory. All of this happens while the adagio agonizes in the beauty of spread-out notes, and here Caracas individuates itself in the memories of one who combines reality with the sounds of an instrument.

In other stories, like “Vuelta a la Patria,” the imaginary of Caracas moves from the interior of the corporeal to the exterior of the parks. In the city, avenues, gardens, silence, and laughter form part of this other form of collective existence that succeeds in connecting the sensation of being there with a yearning for home. Walks through the park, these motions replete with memory, are also united with the migratory movements of those who moved to the capital city, drawn by the deepest of feelings. The symbol of belonging to a city in decay is reflected throughout its streets, in its expressways, at the Bello Monte morgue. Many of the protagonists of Kozak’s stories also relive, or outlive, the anguish of the Caracan life, in a space that’s transferred from memories and yearnings to everyday experiences, and that ends up being part of a shared memory.

One also encounters a profound sentiment of farewell within these stories, which act like small tunnels that allow us, upon finishing one, to enter directly into another. Each movement implies leaving something behind forever, like in the last lines of “Zanahoria rallada,” in which the narrator—who considers himself a great guy—concludes with “me despido” [“I say goodbye”], which immediately brings this feeling of lack to the reader. This feeling is later extended into another story that follows shortly thereafter, “Ya que para despedirme,” where a quotation from Sor Juana Inés de la Cruz (“Hablar me impiden mis ojos; / y es que se anticipan ellos, / viendo lo que he de decirte, /a decírtelo primero” [“My eyes prevent my speech; / for they, knowing already, / what I might say to you, / tell it to you first]”) situates the remoteness of words, as part of what is not said, because one’s gaze forebodes everything that is later omitted.

Part of this omission appears in the contrast of other very short stories, like “Palabras escritas en la arena por un inocente,” and the story following it, “Yo,” where upon citing Idea Vilariño (“Mi nombre no me dice nada” [“My name says nothing to me”]) we begin to think again about what words are for. How, in these two urban accounts, could a word game from the innocent viewpoint of childhood be contrasted with the profound exhaustion of maturity? In the former story, words are just this: little, free sounds that come together in the park, together with the nonsense of the absence of grammatical rules: “¿Mamá, papá, caballo, parque?” [Mom, Dad, horse, park?]. Even so, the profound logic of innocence recreates the instantaneous perfection of life, which is noticed even by a destitute youth who dreams of returning to infancy and reclaiming his dreams. On the other hand, in this space that’s public, hot, Caracan—a little bus—the idea of the Self is far away from the innocence of the parks, and reflects the curious similarity between Caracan public transit and certain prison cells. There, an old woman thinks, at seventy years old, the opposite ideas from those of that boy: she uses, this time, a perfect wordplay; she is astonished by the decline of those who, by age, could be her grandchildren. In this small, enclosed space, “una buseta sucia y destartalada equipada con un reproductor de primera calidad de cuyas cornetas salen palabras nada fáciles de transcribir” [a dirty and beat-up short bus, equipped with a stereo of the highest quality from whose horns come words hardly possible to transcribe], the meaning of the political and historical changes of the last few decades in Venezuela is revealed.

Another open door, between the private and the public, between the house and the city, of music (like jazz) or shared space (like the University), dynamic and sonorous places, could be the completely opposite gesture, which allows us to inhabit the strange world of silence. “El noctámbulo” begins with a quote from Vicente Gerbasi, “La noche impulsa rumores, estrellas, para el noctámbulo, y a su lado corre un caballo con crines de luciérnagas” [The night drives rumors, stars, for the nightwalker, and at his side runs a horse with braids of fireflies], and in this isolated and dark space the mind of an HIV-positive person runs in silence. Here, urban spaces hide in the place of memory, even further within, in that metaphorical form of the unconscious which is like a closed room in a dark part of the house, where memories lie. “Recuerdos de noctámbulo. Recortes, chispazos, imágenes de tragos, cuerpos en movimiento, risas escandalosas” [Memories of a nightwalker. Clippings, sparks, images of drinks, bodies in motion, scandalous laughs] appear to enter and exit a body, from the first to the third person, like a movie in which one is, at the same time, the viewer and the main character.

In this work by Gisela Kozak, random movement continues in various ways through each of the stories: in the urban spaces of Caracas; in comparisons with other places like Mexico City and Paris; between the politics of the Communist Party and those who have taken power today in the military and political dictatorship; from the rebellion of the domestic tribe, the love of a mother, photographs, film, always coming back to a lengthened time, to an inconclusive autobiography, to a short story that is inherited, that is transformed and that only sometimes needs be forgotten, and so which almost always demands to be mentioned and rewritten, as happens in every one of the stories of Casa de ciudad.