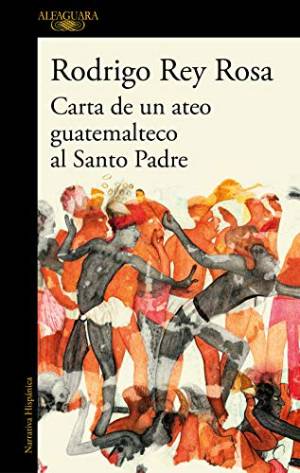 The cover of the new novel Carta de un ateo guatemalteco al Santo Padre [Letter from a Guatemalan atheist to the Holy Father] by Guatemalan novelist Rodrigo Rey Rosa (Alfaguara, 2020) features a section of an extraordinary Maya mural recently discovered at the site of Chilonché in the Petén Department in northeastern Guatemala. Although extraordinarily rich in detail and color, the ceremonial scene depicting standing figures in the mural provides little information as to the nature of the gathering and its ritualistic significance within the Late Classic Maya cosmovision. While Rey Rosa’s new novel continues the tendency of the novelist to explore the contemporary problematics of his homeland, this new work, also set in contemporary Guatemala, reveals a similar opacity and lack of comprehension between the contemporary Maya peoples and their ladino (mestizo) counterparts who have ruled the Central American republic for centuries. The novel explores the rich layers of syncretism that have characterized religious affiliations in Guatemala since the inception of colonization in the sixteenth century. Combining elements of the detective novel with ruminations on the challenging situation in Guatemala today, the novel explores and evinces the complexity and conflict of the legacy of religious colonialism that persists today as various sects of Catholics and evangelicals coexist with indigenous groups, who often incorporate traditional religious practices into their interpretation of Christianity.

The novel is prefaced by a letter from comparative religion scholar Román Rodolfo Rovirosa to Pope Francis concerning a recent injustice being perpetrated by the diocese of Sololá against the Maya residents of the village of Santa Cruz Canjá. In short, the Diocese is attempting to usurp the historical autonomy conferred to indigenous cofradías, or brotherhoods, by unjustly appropriating indigenous lands and a church built by the cofrades.  In response, Rovirosa elaborates a detailed defense of the plight of the Maya of Canjá in their dispute with the Diocese. Rovirosa’s letter, written in florid epistolary style, solicits papal intercession to help the villagers rectify the land dispute and other injustices perpetrated by a new priest who is averse to their traditional roles. In addition, the letter also serves as a means to outline the historical and systemic abuses imposed on the indigenous peoples for centuries, relating in detail the religious and cultural autonomy the Maya cofradías have conserved in their longstanding resistance to Catholic hegemony in their ancestral lands.

As an introductory text, Rovirosa’s letter represents the culmination of his investigation into the alleged abuses by the Diocese against the cofrades of Canjá. The remainder of the novel relates the details of the investigation that excavates the historical oppression and segregation of the Maya people in Guatemala. His quest for meaning centers around a series of conversations with two interlocutors; Don Melchor, an indigenous man from Canjá, and his son Julio. The dialogues and interaction between the three reveal the vast ontological chasm that divides indigenous peoples from their mestizo counterpart in contemporary Guatemala.

Not unlike other recent novels by Rey Rosa set primarily in Guatemala City; El país de Toó [Toó’s country] (2018), Piedras encantadas [Enchanted stones] (2001), and El material humano (translated to English as Human Matter by Eduardo Aparicio, 2009), Carta de un ateo guatemalteco al Santo Padre recalls a similar sense of ubiquitous paranoia endemic to Guatemala’s political and ethnic structures, a foreboding that weighs on Rovirosa and permeates the textures of the novel. This underlying fear, emblematic of the repressive decade of conflict that ravaged Guatemala City throughout the 1980s, originates in the investigatory role assumed by Rovirosa as he pursues the facts behind the grievances of the Maya villagers of Canja. In part, Rovirosa’s quest to unravel the injustices perpetrated against the cofrades of Santa Cruz de Canjá is successful: it facilitates his engagement with sectors of Maya society segregated from most Guatemalan mestizos while also illuminating a deep political cynicism toward the political structures of the country and a growing awareness of the massive human rights abuses committed against Maya communities in the central highlands during the decade of the 80s. His intercultural journey, however, not unlike the iconographer’s task of deciphering the ancient Maya mural, leaves multiple questions unanswered.

As the novel unfolds, his investigation into the abuses of the Diocese deepens, disclosing ingrained corruption in the scaffolding of the religious hierarchy in the highlands. Moreover, the historian’s evolving commitment to assist the cofrades of Canjá is a position that coalesces through dialogue and reflection on the historical and cultural realities of his country. A good part of this positioning owes to a keener sense of perceiving the embedded histories inscribed in the landscapes of Guatemala in different contexts; the Pre-classic Maya Snake Mound underlying Guatemala City’s aqueduct, and an engraved rose set in stone at a sacred ritualistic site he encounters with Melchor near the Pixcayá River during their excursion. As the novel unfolds, these experiences are internalized and accentuated by his conversations with Melchor, a Cakchiquel speaker from Canjá. Melchor not only enlightens him on the extent of their grievances but also reveals the depths of cultural distance between the indigenous experience and his own. This growing allegiance solidifies after Rovirosa’s mystical excursion with Melchor, causing him to reflect more deeply on the extent and power of the Maya people’s historical adversaries: the Catholic Church, a stifling and marginalizing political system, and the cultural exclusion that ensures their continual marginalization.

Ultimately, Rovirosa concludes, on the advice of a legal intermediary, that the only conceivable means to support the cause of the cofrades in Canjá is through monetary donations to their cause. Lacking sufficient funds, it comes as no surprise that Rovirosa, who inserts himself into the seemingly intractable conflict by chance, would attempt to fulfill his commitment to the cofrades of Canjá by resorting to the realm of the aleatory, in the form of a The Equalizer, a Guatemala City casino. Accordingly, as the necessary funds accumulate, Rovirosa’s level of paranoia spikes as he hastens to hand over the winnings to the cofrades who await his assistance in Canjá. In predictable fashion, the aleatory forces intervene in the form of an accident and subsequent traffic bottleneck resulting in a perilous detour and his assault at the hands of gang members who ultimately abort his effort.

The prevailing themes stressed in the most recent novels by Rey Rosa have centered on the urgency of ethnic reconciliation and greater levels of awareness among Guatemala’s ruling mestizos in order for the country to achieve a necessary cultural and political equilibrium.  While territorial independence is central to El país de Toó, in Carta de un ateo guatemalteco al Santo Padre the historical importance of the Maya agency embodied in the cofradías and the autonomous religious spaces in which they operate is of primary importance. In both novels, mestizo/ladino support for their cause is portrayed as fundamental for the possibility of forging authentic change.  In its conclusion, Carta de un ateo reveals how these objectives might be illusory in foregrounding the dark undercurrent of Central American society that threatens to undermine the potential for these advances:  the vortex of gang violence encysted in the marginalized sectors of Guatemalan society, a persistent and random threat even to its most noble humanitarians.

William Clary holds a B.A. degree in American History and a Masters in Spanish. He received his Ph.D in Latin American Literature and Culture from the University of Missouri in 1995. His primary field of interest and research is contemporary Central American Narrative, with an emphasis on contemporary writers from the Northern Triangle of Central America.  Most recently, his research work has focused on Central American post-war novels by Horacio Castellanos Moya, Rodrigo Rey Rosa, and Julio Escoto. He has published articles on the novels of Miguel Angel Asturias, Sergio Ramírez, and most recently on the narrative of Honduran writer Julio Escoto. His work in the classroom at the University of the Ozarks involves teaching Latin American History and contemporary Spanish American Literature, Hispanics in the U.S., and Latin American Film.