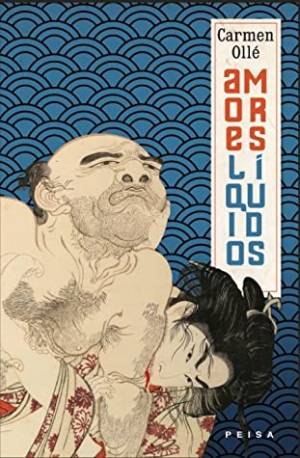 The three stories in Carmen Ollé’s Amores líquidos speak to theories Zygmunt Bauman develops in his essay Liquid Love (2005): for example, that postmodern interpersonal relationships are no longer marked by a need for continuity or consistency.

The first work in Ollé’s text is a novella titled “Le malheur (The misfortune of not being able to be alone).” The title is a phrase from La Bruyère, which Edgar Allan Poe used as an epigraph in his story “The Man of the Crowd” (1840). In effect, Ollé pays homage to Poe’s story when her narrator and protagonist, Carmen, mentions it at the beginning of the text. In Poe’s story, a man spends his time observing passers-by on the street, until he is struck by the image of an elderly man’s face; he then decides to follow the man. However, he stops after a while because he is overcome with a terrible suspicion. In Ollé’s “Le malheur,” the narrator is immersed in a series of pursuits involving the ghosts of friends and the fictional characters they created in their respective works of fiction. For example, Pilar Dughi (a Peruvian writer who passed away in 2006 and was a close friend of Ollé’s) is followed by her character Fina Artadi from her novel Puñales escondidos [Hidden daggers] (1998). We also come across José María Eguren, who is followed by his iconic character, the magical girl with the blue lamp. Carmen, for her part, follows a young woman who has a nomadic look about her and who seems to walk aimlessly. However, this young woman suddenly becomes Ada, the protagonist of Ollé’s novel Las dos caras del deseo (1994), a dear classmate who committed suicide—and yet, she is also Pilar Dughi, as well as a toothless elderly woman.

Characters, ghosts, or literary creations wander the streets of Lima and Barranco, creating an intriguing labyrinth of interchangeable, liquid, and mercurial identities, depending on the mood of the narrative voice. All the characters’ movements seem guided by chance—André Bretón’s “objective chance”—which sets the stage for extraordinary encounters. Carmen, the protagonist, is a proofreader. She rents a room in a guest house from a crude, widowed German woman, the mother of a disabled girl named Sonia. Sonia’s terrible cries and bellows are heard throughout the house. With this, we sense a nod to Jane Eyre, Charlotte Brontë’s celebrated novel, and the poor, crazy woman whose screams frighten everyone in Mr. Rochester’s mansion. In addition to the adolescent Sonia’s shrieks, we hear the gloomy sounds of a piano, supposedly played by a deranged guest on the third floor (the insane woman in Brontë’s novel is also locked up on the third floor), or maybe a neighbor, or a ghost, or no one. Perhaps it’s “a piano’s skeleton” (p. 23) that echoes in the protagonist’s memory; nonetheless, Carmen endeavors to learn the player’s identity…

Closely in line with an exasperated romantic sensibility, Ollé adds cursed houses to the mysterious, evil, wandering characters or ghosts. These houses call to mind stories such as Poe’s “The Fall of the House of Usher,” or the sinister house in Brontë’s Wuthering Heights, or Mr. Rochester’s aforementioned perturbing mansion.

Moving through these pages we feel as if we have entered a nineteenth century nightmare or a Far Eastern fantasy in which the waking and dreaming realms blend together. It is a “liquid” world, since there is no decisive time or space. The physically and mentally wandering characters have hazy, mutable identities. Their delusions of being stalked and persecuted are linked to past feelings of guilt or recurrent regret, hence the dreadful meaning of La Bruyère’s citation. Still, beautiful spaces emerge: fig trees and flowers in a park, or a squirrel crossing a royal poinciana tree, or a haiku. These are glimmers of serenity amid streets and quarters that are violent and absurd; where even a chocolate cake is described as being covered in saliva. The protagonist wants to escape these scenes, but she cannot. It’s as if she were stuck in a private hell, in her fascination of pain and darkness, along with her personal ghosts.

Disconcerting scenes, characters and events transited the pages of Ollé’s Halcones en el parque [Falcons in the park] (2011), a work in which Silvia Miranda rightly sees a homage to Balzac, Zola, and Victor Hugo, given the mix of naturalism and feverish fantasy. Something similar occurs here too, with homages to Poe, Trakl, and Andreiev. Strange atmospheres appear in Ollé’s other works as well, such as Tres piezas No (Inspirados en el teatro oriental) [Three Noh pieces (Inspired by Far Eastern Cinema)] (2013) and the novel Halo de la luna [Halo of the moon] (2017). Ollé admirably develops this narrative—her agile prose flows, replete with lyrical feats that link reality and dreams, horror and eroticism.

The next story, “Mis casos emblemáticos” [My emblematic cases] is a psychological melodrama in which the character Rubén undergoes a gender reassignment operation. Rubén and Lucero are young brothers with vague and pious incestuous fantasies. They also have a certain transparent and water-like or angelic quality: flexibility, ambiguity, docility.

In contrast to the professional distance of an NGO that gives these characters shelter and analyzes them as “cases,” the NGO director shows them empathy. Sensibility and imagination are her visionary tactics and they allow her to understand the fractures in both young people. This is a strange and suggestive tale in which something angelic flutters among hurt, defenseless, and incomplete beings.

The book ends with the short novella “El Chofer” [The chauffeur]—an extended version of the same story in Retrato de mujer sin familia ante una copa [Portrait of a woman with no family in front of a glass] (2007). We are once again in a guest house, with its staircases and rooms on top of one another. Inside, an elderly man is in his final throes; many women surround him and take care of him, although deep down they hope for his death. Opposite the elderly man is Héctor, a chauffeur, whose strength and good looks dazzle the women in the house, especially Julia, a university professor of literature and the protagonist-narrator. In spite of her bourgeois upbringing, and following the strength and purity of her sexual instincts, she falls in love with this simple, marginal man who is both tender and gruff. He is a recovering drug addict who now assists the ill elderly man. Héctor is also a godfather figure in the Callao slums, where he is admired like a hero.

Closing this collection with a love story that promises nothing both is and is not a manifestation of Bauman’s liquid love. On the one hand, there are no time requirements, no commitments. Yet, on the other hand, the protagonist follows a passion imbued with the rebellious ingredients of romantic love—a love that also contains a heavy dose of explicit eroticism that eighteenth- and nineteenth-century romantic fiction lacked. Beautifully, Julia, the protagonist, lets herself fall in love without worrying about outcomes or calculating “costs and benefits,” and without putting herself before the human being she loves. Rather, she allows herself to admire his quick wit and intelligence, which makes up for his ignorance regarding so-called “cultured” subjects.

The three stories in Amores líquidos demonstrate Carmen Ollé’s talent as a narrator and the important place her work occupies in contemporary Peruvian literature.

Rossella Di Paolo (Lima, 1960) studied Literature at the Pontifical Catholic University of Peru and has published the poetry collections Prueba de galera (1985), Continuidad de los cuadros (1988), Piel alzada (1993), Tablillas de San Lázaro (2001) and La silla en el mar, which won the Luces Prize from the Peruvian daily El Comercio for Best Poetry Book of 2016. Her poetry has appeared in a variety of anthologies of Peruvian and Latin American poetry. In 2020, she won the Premio Casa de la Literatura Peruana prize and was distinguished as a Personalidad Meritoria de la Cultura (Admirable Cultural Personality) by the Peruvian Ministry of Culture.