Editor’s Note: “El Techo de la Ballena,” or “The Whale Roof” in English, was a landmark artistic and countercultural group that emerged in Venezuela in the early 1960s. Along with Adriano González León (1931-2008) and Daniel González (1934)—writer and photographer, respectively, of the book Asfalto-Inferno (Asphalt-Hell), published in 1963 by the group’s press—its members included Juan Calzadilla (1931), Caupolicán Ovalles (1936-2001), Carlos Contramaestre (1933-1996), Salvador Garmendia (1928-2001), and Francisco Pérez Perdomo (1930-2013), among others. The texts featured here represent a strong example of this group’s aesthetic project, critical of the accelerated process of transformation that Venezuela was then undergoing as it went from an essentially rural to a predominantly urban country due to the influx of oil wealth. These texts put forth a scathing critique of the mechanized, alienating way of life set in the city, as well as a condemnation of the urban and political violence that marked the country just as intellectual and artistic visions clashed: some supporting the start of an important stage of representative democracy championed by the government of the day, and others in favor of the Cuban Revolution and guerilla movements in the context of the Cold War. 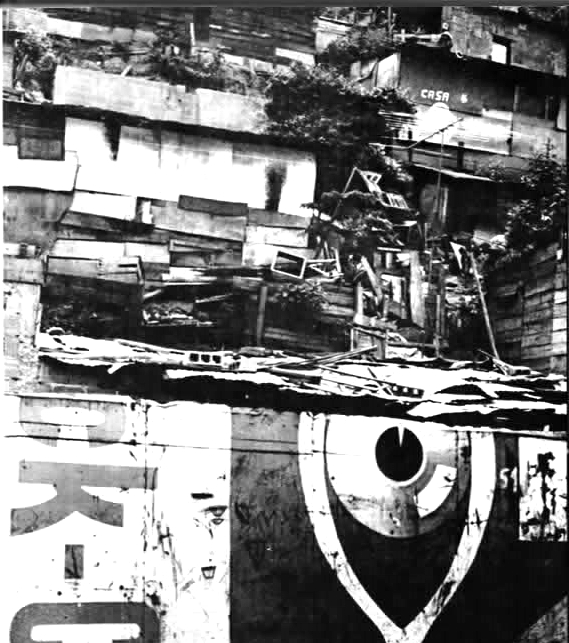 SHARP-EDGED BEAST    You’ll be disappointed at first sight when you look above expecting a clear sky. Headlights fall upon you from above, headlights passing by, birds shooting ahead like a roller coaster at the amusement park. Neon city, city of celestial transit, a fast-paced invention of prestressed concrete. And a thousand more headlights pass by, a thousand more headlights. Overhead, through your head, the drivers’ asses on your head, the mudguard chopping my head off, gorging exhaust fumes, three tires against it, rubber, tire, rubber, respiratory inflection, all the hydraulic mechanisms, people’s heads imploring and billboard-dazed, you or I, anyone, arms akimbo like Christ, offended, jumping like an animal between the white lines that shelter the poor, weary pedestrian, with the big face of a fool, and the officer lifts his arm at you, like this, and he lifts his other arm like that, a puppet blowing his brains out at each whistleblow while cars splatter us with sickening grease, smoke, scraps of paper, shit, the rite and devotion to tetraethyl lead seizing us each day. There’s also a whole propensity for camouflage, for self-defense. Urban safari militants, at the mechanic shops one must contend with some of these rather sharp-edged beasts. Needless to say, you run, you save your life. Take two steps forward, look left, look right, turn back, stand at the traffic island, the red light protecting you, from the other side the green light hurls at you its wild boar invasion. It’s not about catching any prey. It’s about making it to the other side, panting, desperate for a radiant second from the woman crossing the street, and then starting again, another street, the avenue, all the avenues, the cars turning, the tires, the feet, the entire city on the verge of explosion. 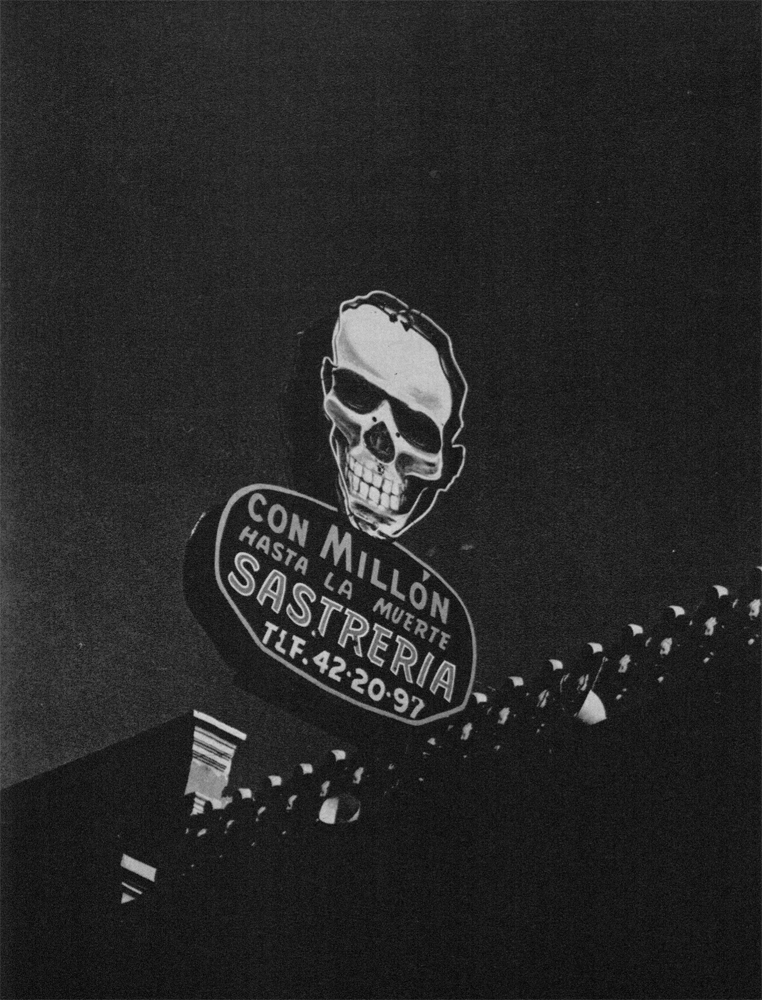 DRESS LOTTERY   Like a sharecropper toughened in urban absorption, anyone half-turning the corner is dazzled or tumbles, startling all winds and windows. You play the pedestrian and anything makes your ankles boil. You or I or the neighbor exchange cigarette butts for the cheapest of dusts, or the tremor of a bus, continuing to smear the grime with your handkerchief until you enter the movies and then everything starts like this: beautiful woman, butt-bump, sad woman, barging in, you wanting to grab the hem of her dress with your mouth and the peanut seller, that pig bastard, at the square he burns leaves in vapors, he burns any little thing, he erases himself. Yesterday, howling, everything was exactly the same. A few days ago, raining, everything was also the same. And everyone stubbornly continues, tingling or swallowing their imported fruits without the slightest shame. What shame? That one, don’t you see, sir… don’t you see they all go around like that… How? Dressed! Can you see… Dressed! Let the wind blow, leaping iguana-like, drooling over cardboard posters neon tubes, drooling over the sidewalk, and you will see them all walking, one two, shelled swallowed, one two, gazing at the stairs, and once again the asphalt hell: scab sweltering under the sun, residue of our nation’s first industry, our pride, the essential power of our nationhood galloping through the constructive order of democracy and majority election polls. Sir, rise up, disorder yourself. But then, right when you half-turn the corner, someone offers you a dress lottery. An earthly gain compared to the urban obscenity of always walking in coverings. A gain of everlasting life, because, for the price of a million, possibilities are celestial. That is the limit to the threat of shamelessness, fabrics. After that it’s all celestial robes, strange dies, imported refined attractions. They’re competing up in the air and that’s a good thing. The sovereign humor of those who trade shrouds is worthy of celebration, out in the open, making itself heard from the ledge from where the shrapnel falls. Its malice pictures us as naked corpses. Anyone could have seen us like this, thick with splatter, without biting any fruit, jerking off over the woman glimmering on the sidewalk. Facing the street, it doesn’t matter, reeking and sanitizing, the city offers findings and radiance, bad tastes, that pitiful restaurant floor, disgusted, but deep down or in the end, we say this: there’s no end and we are not tired and anything can furiously happen either in firm steps or stumbling. We are known for being threatened with life. 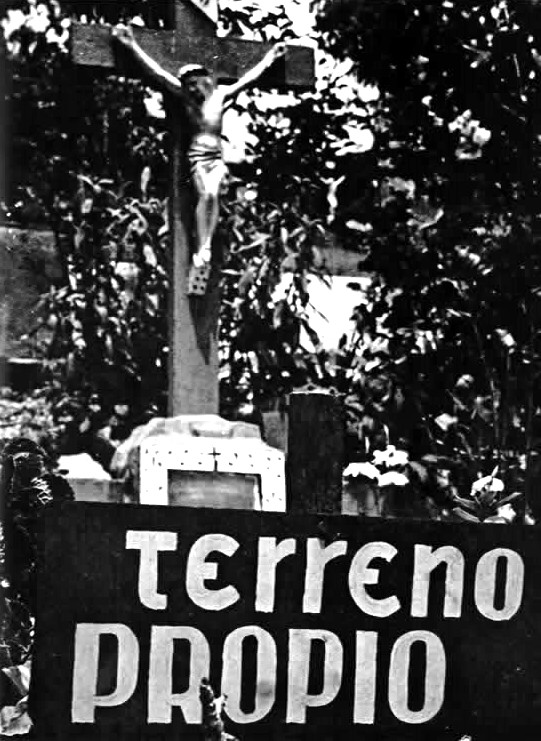 INVERTED HIEROPHANY   A thousand years ago, afflicted with terrestrial desolation, men decided to distribute the skies. Sprinkling for forests, crumbs for flocks of birds, miraculous fishery or perfect fruits to feed the voracity of kings, the earth, that is, its content, was only an unfortunate shadow reflected from above. All our surrounding space became contemptible and perishable. At the top, only one truth: the seed from whence our scrawny arms sprout. For a long time, the celestial business went on. From a handful of gods, we moved to tercets, until we arrive to the one: a handful turned accusatory index finger, the one true index, only one eye, only one triangle, disturbing Cain for the sole crime of swallowing good weeds. Today, distant from that persecution, man has begun to distrust certain equivalences. The heights are limited to rain, fireworks, and the trail of radio-controlled planes. The corpses that surmount any plausible number, the fires, the alliances, the extended criminal records from the rural police, the dogs trained in latifundia, and the impenetrable groups still shooting in the mountains, they all show that men have decided to take their share of land. They perform the inversion while our miserable below conditions celestial shifts. Above, the clouds are but white or purple urban effluvia, dark streaks projecting country animals and trees. The few that still acknowledge the virtues of ozone do not cease to guard themselves against the agrarian fervor. Even when, with their filthy knuckles, they knock the even filthy gates of paradise, a high sense of private property reminds them to purchase plots for their remains. They fear that, in the same skies, new winds will scatter the dust of their bones.

Source and Permission Statement
From Asfalto-Infierno y otros cuentos demoníacos (Asphalt-Hell and Other Devilish Tales), copyright © 1963 by Adriano González León. Permission to publish original and translation has been obtained from copyright holders Andrés González Camino and Georgina González Ferrero. Permission to reproduce images has been obtained from Daniel González. No publisher owns publication or translation rights.

Adriano González León (1931-2004) was a Venezuelan writer known for his novel País portátil (1968). A recipient of the Venezuelan National Prize for Literature (1980), González León’s experimental prose revolutionized the national literary landscape during the 1960s, especially through his activities with the artistic collective El Techo de la Ballena.

Daniel González (1934) is a photographer and visual artist. Along with González León, Juan Calzadilla, and others, he is one of the founders of El Techo de la Ballena. González’s oeuvre includes collages, graphic design, documentary film, and photojournalism. His work Alirio Díaz, La Candelaria (1966) is considered one of the most important photo-books produced in Venezuela.

Maria Anna Zazzarino is from Caracas and lives in Santa Barbara, California. She is currently a Chancellor’s Fellow at UCSB, where she studies literatures of extraction in the Americas.