Written in a thrilling torrent of prose by one of our most exciting new writers, Paradais explores the explosive fragility of Mexican society—fractured by issues of race, class, and violence—and how the myths, desires, and hardships of teenagers can tear life apart at the seams.

Fernanda Melchor (Veracruz, 1982) is an author recognized for her literary and journalistic works. In 2017 she published her novel Hurricane Season, which has accumulated various awards and accolades, including being part of the shortlist for the 2020 International Booker Prize. Melchor also received the PEN Mexico Award for Literary and Journalistic Excellence and, in 2019, Germany’s International Literature Prize for Hurricane Season. Other works of hers include: Aquí no es Miami (2013), Falsa Liebre (2013), and Páradais (2021). Recently, Melchor formed part of the writing team involved in the new series Somos, now available to stream online. 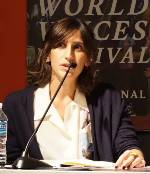 Sophie Hughes has also translated José Revueltas and Enrique Vila-Matas for New Directions. She was shortlisted for the 2019 and 2020 International Booker Prize.

Octavio Armand: "A Concert for Misconduct": A Conversation with Roberto Cantú

Octavio Armand is a Cuban poet and essayist whose collected work (1974-2016) was recently published in three volumes: Contra la página (Against the page, 2015), and Canto rodado (Spinned Stone,…

The hollow-eyed hen / laid the greatest egg in the world: / the fine white lines of her claws / grip the ground in devotion / as she clucks, and…