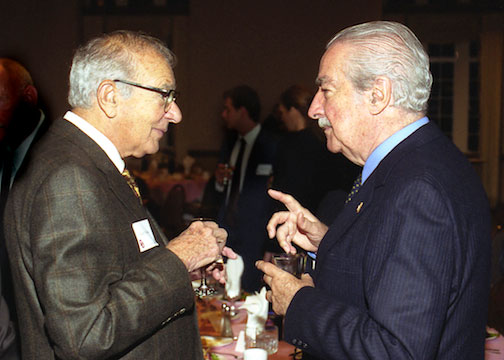 The Passionate Fire of Álvaro Mutis

Who among today’s Spanish-language writers is capable of engaging in dialogue, with poised enthusiasm, with authors as diverse as the Italian Giuseppe Ungaretti, the Frenchman Francis Ponge, the Pole Czesław Miłosz, or the Brazilian João Cabral de Melo Neto, as well as with those who have been or are presently the author’s close friends, such as Octavio Paz and Gabriel García Márquez?

The Colombian Álvaro Mutis (b. 1923) is, without doubt, a contemporary writer who possesses a cultural background sufficiently broad and universal to transcend languages and borders. This cosmopolitanism allows him to moderate a compelling debate where poetry and its interplay with the destiny of humankind in this tenuous world succeed in bringing together participants from all walks of life. His work has been translated into approximately twenty languages, including English, French, German, Italian, Portuguese, Japanese, Greek, Hebrew, Turkish, Polish, Dutch, Swedish, and Danish. Such international acclaim fits seamlessly within the ideal of a world community of literature that the Neustadt Prize endeavors to foster and recognize.

Mutis’s poetry, short stories, novels, and essays reflect a convergence of historical influences, beginning with the Bible, extending to the cultures of Islam and Byzantium, and finally arriving at such seminal figures in Latin American history as Simón Bolívar—all of which embody and illuminate the complex relationship between Europe and America. A universal dialogue of cultures that comes alive in Mutis’s essays and commentary reflects his intimate understanding of Russian literature, French history, and the development of the novel in the United States, without ever distorting or underestimating the pivotal role of Spain in the formation of Latin America.

Mutis represents a rare combination of the cosmopolitan and the universal on the one hand and Latin America’s unique local flavor on the other. Like Jorge Luis Borges, Mutis is capable of appreciating, understanding, and evaluating through his literary creations the various nations that a broad world offers us as readers.

There is yet another argument for championing Mutis’s work for the Neustadt Prize: the central figure who brings everything together, endowing it with unique character, is a protagonist named Maqroll el Gaviero (Maqroll the Lookout). Marginalized, out of place, adrift on the rough seas of an indifferent world, his adventures are both pilgrimages and farces, undertaken with lucid and penetrating fatalism.

Such despair, intuitive and stripped of all self-delusion, goes hand in hand with a sober and sublime respect for the illusions to which human beings cling so fiercely, giving rise to one of the most perfect creations of twentieth-century Latin American literature. Maqroll becomes, for readers the world over, a compelling and indispensable being.

Mutis’s fiction takes place within the evocative framework of the tropics, a burning landscape where splendor commingles with the limits of human endurance and where the fragility of memory and the devastating force of untamed nature devour both the creations and the cherished beliefs of humankind. Along with violence and desire, these elements combine to produce a passionate search for those traits that lead to the stubborn obsession of individuals to make their lives—in the midst of precarious and conflicting societies—more secure and enduring. Here, too, a most ancient awareness confronts a world in perpetual crisis and renewal. From this backdrop have sprung the vibrant pages of La Nieve del Almirante (1986), Ilona llega con la lluvia (1987), Un bel morir (1989), La última escala del Tramp Steamer (1989), Amirbar (1990), and Abdul Bashur, soñador de navíos (1991), and also the stories and testimonials found in La mansión de Araucaíma (1973) and Diario de Lecumberri (1959).

With refined literary acumen, Mutis succeeds in creating a saga deeply rooted in verse, as found in the Summa de Maqroll el Gaviero, where the plot never departs from the epic and universal aspects of poetry. On the contrary, his fiction offers a sagacious parable not only of the Colombia and the coffee growing lands of the author’s childhood, but also of a land that resonates throughout all Latin America. He shows to what extent his country has been changed and how its passionately held core values have been destroyed by harsh and painful realities. Nevertheless, Mutis always penetrates beyond those tragedies in an unambiguous attempt to pose vital questions that force his protagonists to confront their own transcendental existence. From his exile in Mexico he has succeeded in crafting tangible and compelling images of his homeland and of Latin American reality in general. Mutis uses these images as a foundation for the construction of a unique world that manages to subsist due to its internal consistency and its faithfulness to the obsessions that have haunted the author since 1948, when he published his first collection of poetry, La Balanza (The scales). His characters are forged from a passionate fire originating in a long coexistence with the author himself.

Although his protagonists create a stage where European and Western influences contend with the hybridization and metamorphosis they undergo upon arriving in the New World, Mutis’s work is never a simple essay about identity. It is a literary journey in which the reader discovers and confronts his- or herself.

The utopia that Mutis ultimately proposes is that of an infinite and open reading process similar to the one Joseph Conrad defined when referring to Marcel Proust: one in which analysis has become the creator. A literary journey where a single, definitive reading of a work is all but impossible, thus allowing the text to accompany us through the successive changes in our own lives without becoming irrelevant. By honoring and recognizing Álvaro Mutis, the jurors of the Neustadt International Prize for Literature will be honoring one of the great creative literary minds of our time and, consequently, reaffirming the Neustadt Prize’s own criteria for literary excellence.

Translation from the Spanish by David Draper Clark

Photo: Colombian writer Álvaro Mutis (right) with Walter Neustadt at the 2002 Neustadt Festival, from the archives of World Literature Today. 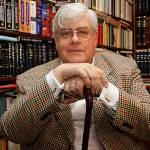 Juan Gustavo Cobo Borda (Bogotá, Colombia, 1948) is a poet and literary critic. He has extensive editorial experience as a founder and director of cultural journals. In the diplomatic sphere, he has shown interest in the international relations of many Latin American countries. He has been a member of the evaluation committees of several literary prizes, including the Premio Juan Rulfo (Mexico), the Premio Rómulo Gallegos (Venezuela), the Premio Reina Sofía (Spain), and the Neustadt Prize (United States). He received a doctorate honoris causa from Colombia’s Universidad Central in 2016, and he has been a member of the Academia Colombiana de la Lengua since 1993. He has undertaken intense and invaluable efforts for the study and circulation of Hispano-American literature, and Colombian literature in particular, with essay collections including Desocupado lector (1996), Para llegar a García Márquez (1997), Borges enamorado (1999), and Historia de la poesía colombiana. Siglo xx (1984). In 2012, Tusquets published his Poesía reunida (1972-2012).

Octavio Paz: The Poet as Philosopher

The poet Derek Walcott remarked recently, “The greatest writers have been at heart parochial, provincial in their rootedness. . .  Shakespeare remains a Warwickshire country boy; Joyce a minor bourgeois…