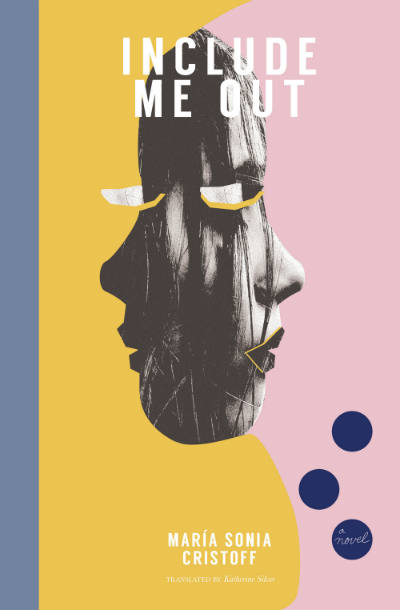 From Include Me Out

Mara is a simultaneous interpreter who moves to a provincial town in Argentina in order to speak as little as possible for a year. Steeled with the ten rules of silence set out in her manual of rhetoric, she takes a job as a guard in the local museum. The advantages of her work are threatened when she’s asked to assist in the re-embalming of the museum’s pride and joy: two horses―of great national and historical significance―are disintegrating and must be saved. But her goal and her slippery grasp on sanity lead her to more anarchistic means to bolster her purpose. Bold, subversive, and threaded through with acerbic wit, Include Me Out is an homage to silence and the impossibility of achieving it.

Coming from Transit Books in February 2020.

Mara arrives about ten minutes after the stipulated time. The person she is replacing looks at her with what appears to be excessive resentment, puts on a coat that is wholly unnecessary for noon on that boiling hot day, and leaves without saying goodbye. It’s Saturday, and the first specimens of the cultural tourists who show up on weekends have arrived. That prospect, along with the heat, the sticky screeching heat, conspire against her ability to disengage from her surroundings, against her carrying out the exercises that usher her into detachment. The chair feels hard, uncomfortable, there’s no question it will end up destroying her back, which has already been hurting for several days. Someone comes up to her to ask if it’s really true that this man traveled more than twenty thousand kilometers pushing that wheelbarrow just to win a bet. She answers rudely, which makes her feel even worse: intense exchanges have no part in the protocol of her new life. She stands up and takes a turn around the room. Her back pain, she ascertains, lets up when she walks. She stops in front of Vasco’s aforementioned wheelbarrow and confirms that, yes, the information as written is clear, this is not the source of the confusion. She keeps walking, slowly and in a zigzag. She stops in front of the two embalmed horses. She has never been that close to a horse, dead or alive or embalmed. To think that, like her, they traveled for years from place to place and are now motionless in this room. A paradoxical tribute. Truth is, she wouldn’t have wanted any other kind. Her experiment in detachment arose, in fact, out of one of the most powerful forces in the world: saturation. She arrived in this town implacably fed up with what she had left behind. She would ask them, if they weren’t horses, and if they weren’t embalmed, if the same thing had happened to them. If they, like her, are examples of a wounded cosmopolitanism. Her head aches and feels heavy. She walks into the hallway for a glass of water so she can take a painkiller. The water in the water fountain is warm and the little plastic cups have disappeared. She figures she would waste more time if she tried to find out who is in charge of restocking them than if she left the museum and went to the kiosk to get a bottle of very cold water. Leaving the gallery completely unattended could become yet one more episode that would cost her the job, she thinks as she crosses the plaza.

In order to spy on an attractive and elusive neighbor, Xavier de Maistre, the character, identical to Xavier de Maistre, stands on the edge of the abyss, perched on his window sill, one leg on either side. It occurs to him that the nocturnal expedition around his room that he has decided to embark on could very well include a horseback ride—a ride on the back of one of those animals that always fascinated him, especially if they were inanimate. He rides on and on as his mind wanders over a broad array of subjects, memories, and considerations. An homage to Quixote? A fascination with horses, above all inanimate ones, of this alter ego who takes off on a voyage around his room for a second time. A character who goes into hiding after traveling widely. The first time, imposed on him by others: prison for having fought a duel; the second time, not: weary of the din of the world, he rents a small room where he knows nobody can find him. There he devotes himself to minute observations, philosophical digressions, art criticism, gossip, synthetic theories, eulogy, malice, memory, the unparalleled happiness of self-imposed reclusion. The parallel composition of an epistolary poem, which is never published. Rage at the fatherland, war, Russian exile. The permanently mocking tone, a mocking tone that in De Maistre never flags. The temptation to imitate him in this other story of self-imposed exile, but there’s an excess of mockery in our Pampas. Xavier de Maistre’s saturation with discoveries and training and constant chatter. Saturation, saturation. Xavier de Maistre and his two expeditions around his room, which are set forth as manuals. Manuals to inspire stillness, observation, and silence. The quantity of things one can manage to hear, to think, if one remains still, still and alone, still and in silence. A different kind of mockery. A buzz. (After Xavier de Maistre, Voyage Around My Room and Nocturnal Expedition Around My Room, New Directions: New York, 2016)

The lumbar moment—as she calls it when her vertebrae make contact with the back of a chair, never to move again, not for anybody or anything—gets better every day. She could assert without exaggeration that it is the most visible change in her new life. Before, she would sit down any old way, without thinking; now, she always pays attention no matter where that point of contact occurs, not only on the guard’s chair in the room. Muteness is also the art of a still body, so says her manual of rhetoric. To that end, she has come all the way here in order to be still. Still and mute. Or, not exactly: remaining silent is important as a paradoxical speech act, so also says her manual. Mara is just now beginning to perceive the eloquence implicit in this business of remaining silent, and she enjoys it doubly, out of revenge, rage, and vengeance; she enjoys it because she is something like a survivor of a camp, a hospice, a ward, a fire, a conflagration, which in her case, took a discursive form, the form of the ritornello: an interpreter can never, for any reason, remain silent. In her booth, an interpreter can do anything: she can sneak a drink, pop pills, strip naked in front of the colleague she happens to be working with that day; she can plan an assault, a suicide, a brilliant heist that remains a mystery to the police for centuries; she can paint her nails or pull them out, say anything she wants, make mistakes, create a misunderstanding with fatal consequences, unleash a third world war, reveal an unspeakable secret; she can invent, mock, talk about what she dreamed the night before; she can shout, swear, facilitate an unexpected peace treaty, explode a distant bomb; she can make millions from that sentence they wrote down next to the number of a bank account that is impossible to trace; she can speak in dead languages like someone possessed; she can look at a photograph she would never show anybody and make comments about it; she can recite her favorite poet; she can read the headlines of a provincial newspaper; she can practice mnemonics; she can invent lines she doesn’t know of a song she has just discovered; she can dictate her last will and testament; she can talk the way she talks to her dog or her lover in private, but never ever ever can she remain silent. She can even do what she did that day, but she can never remain silent.

María Sonia Cristoff (Trelew, Patagonia, 1965) is the author of five works of fiction and nonfiction, including False Calm and Include Me Out, and lives in Buenos Aires, where she teaches creative writing. Her journalism can be found in Neue Zürcher Zeitung, Perfil, and La Nación. She has edited volumes on literary nonfiction (Idea crónica [Cronic idea] and Pasaje a Oriente [Passage to Orient]) and participated in a series of collective works. Her work has been translated into six languages.

Katherine Silver’s most recent and forthcoming translations include works by María Sonia Cristoff, César Aira, Juan Carlos Onetti, and Julio Ramón Ribeyro (winner of the Premio Valle-Inclán 2020). She is the former director of the Banff International Literary Translation Centre (BILTC), and the author of Echo Under Story. She does volunteer interpreting for asylum seekers.

I met Fogwill when I had my first bookstore in Buenos Aires, in the year 2005. He was living close by, in a hotel. He had just separated from one…

We’re a family of four. I sleep very late because I’m an insomniac. Sometimes I only manage to fall sleep around four AM. At six I’m already up and tending…

Animality and Writing: A Conversation with Pilar Quintana