Despite the current prolific production of indigenous writers in Peruvian and Mexican contexts, their work is not regularly translated to English. I do not mean to affirm that native authors must be translated in order to get fame or prestige. However, by disregarding indigenous literature, English-language translators reproduce colonial hierarchies between languages and cultures. Considering that professors and students discuss canonical writers in classrooms, I contend that translation could play a seminal role in decolonizing the Latinoamericanismo taught in North American institutions. In the twentieth century, translators such as Gregory Rabassa, Edith Grossman, and John Felstiner contributed to disseminating the works of Gabriel García Márquez, Álvaro Mutis and Pablo Neruda, respectively, in American literary fields. Nowadays, translators maintain the same predilection for translating famous Spanish-language fiction. Along these lines, we might mention Megan McDowell’s translations of Samanta Schweblin, Mariana Enriquez, or Alejandro Zambra, and Sophie Hughes’ translations of Fernanda Melchor and Rodrigo Hasbún. By contrast, we can identify only a handful of English translations from Quechua, Mapuche, Nahua, or Maya literatures. I believe translators, as cultural agents immersed in power relationships, could defy the expectations of Anglophone readers about the Latin American “republic of letters” by looking at indigenous writers to confront dominant literary conceptions.

In the last issue of Latin American Literature Today, we devoted a dossier to the translator Megan McDowell. Her magnificent work highlights translators’ roles in configuring a Latin American literary canon in Anglophone spheres. McDowell’s efforts evoke the task of the translators according to Walter Benjamin’s beautiful essay “Die Aufgabe des Übersetzers.” It is important to note the meaning of “Aufgabe” in German. It is a hard duty, it is a great responsibility, and it is sometimes an impossible exercise of creativity. In other words, the difficult task of translators is to promote foreign authors into English intellectual arenas. Considering these aspects, how do American publishing houses or literary magazines try to promote Quechua, Cho’l, Macuxi, and Nahua writers? The English-language literary system ignores the aesthetics and poetics of indigenous poets and narrators. In this context, LALT is an exception. This magazine has made visible the works of Amerindian writers—in their mother tongues, Spanish, and English—since its first issues. Arthur Malcolm Dixon coordinates the indigenous literature section as principal editor, and I am the correspondent. Our mission is to publish poems, essays, and fiction in native languages with translations into Spanish, Portuguese, and English. We recognise the efforts of indigenous authors to write and to speak in the languages of their ancestors, but we also recognise the creative efforts of self-translators and translators. Certainly, magazines such as World Literature Today, Asymptote, and Words Without Borders also include indigenous texts in their recent issues. However, I would like to emphasize that LALT has dedicated a special section to promoting indigenous literature in every issue. At present, our mission with Arthur Malcolm Dixon is to encourage the participation of women indigenous writers. For example, in issues 20 and 21, you can read the work of Chaska Anka Ninawan, Dida Aguirre, and Gloria Caceres in Quechua, Juana Peñate Montejo in Cho’l, Shuar poet Maria Clara Sharupi Jua, Mapuche writer Roxana Miranda Rupailaf, and Brazilian indigenous writers such as Julie Dorrico and Aline Kayapo. This project has been possible thanks to the collaboration of friends and allies such as Paul Worley, Claudia Arteaga, Caroline Garriot, and Carol Rose Little, to mention only a few names. In addition, I contend that this indigenous literature section has become a fundamental fulcrum for teaching Amerindian literatures in North American Universities. For example, thanks to the support of my colleagues, professors Meghan Peace and Mark Lokensgard at St. Mary’s University, I am currently teaching an undergraduate class on Mapuche, Shipibo, Uitoto, Maya, and Macuxi writers.

Now let me talk about some points regarding Quechua literature and translation. For Quechua subjects in Peru and Bolivia, Llaqta is more than a space populated by human beings; it is also a plethoric land, a fertile ecosystem, in which humans and nonhumans participate in reciprocal relations. We need to acknowledge that all these aspects are incommensurable in societies defined by a Eurocentric conception of the human and the development of extractive industries. In Camacho and Condori’s narratives, Llaqta brings to mind the concept of “the reminder,” proposed by Jean-Jacques Lecercle and evoked by Lawrence Venuti. In accordance with Venuti, “the reminder” refers to “linguistic variations” that “do not merely exceed any communicative act, but frustrate any effort to formulate systematic rules” (10). In this light, Llaqta means an incommensurable and untranslatable world-system. However, it is important to note that the untranslatable also coexists with the hegemonic rules and constraints that lend authority to translations. For example, Noemy Condori translates Camacho’s text “An Innocent Young Man” to a non-indigenous audience in line with literary norms or expectations regarding Quechua culture. On the one hand, Condori underlines interactions with landscapes and solemn intonation. On the other hand, she also breaks with the expectation of Quechua nature as a cosmic or exotic space. Condori’s translation explains that non-human beings in Quechua territories are forces that can produce detrimental effects in the life of rural communities. Beyond the exoticism of Quechua landscapes, the translator transmits this crucial idea: be aware of the almas and spirits that walk around the mountains and lakes.

In a similar way, “Makiyuq Isabelamanta,” the short story written by Noemy Condori, presents a world in which witchcraft plays a significant role in a Quechua community of Bolivia. However, the last sentence is impossible to translate from Quechua to English or even Spanish: “Yachankuchá, ajnamanta chay layqa atiyniyuq, ajinata Asirqucha jap’ikapun.” The English translator Robbie Felix Penman, proposes this version: “The people must know, that’s how witchcraft has power, that’s how Asirqucha got her.” So, what is untranslatable in this passage? In simple terms, we can say that Layqa’s activities are more complex that the Eurocentric conception of “witchcraft.” Layqa is something more than a malefic entity according to Quechua systems of knowledge.

I want to conclude with this statement written by the Quechua-mestizo Peruvian author José María Arguedas in his prologue to Tupac Amaru Kamaq Taytanchisman, a Quechua poem from 1962. According to  my conversations with Macuxi, Munduruku, Mapuche, and Maya intellectuals, I think this proposal from Arguedas comes into dialogue with other indigenous literary projects in Abiayala:

We must expand our Quechua literature, in particular the literature produced with the popular vocabulary. However, the erudite tendency must also be promoted with a comparable effort. Let us show that the Quechua of the present day is a language in which it is possible to write a beautiful and impassioned literature like in any other language elaborated over centuries of literary tradition. Quechua is also a millenarian language. 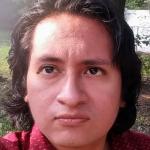 by Ana García Bergua
Aída Betanzos, the woman in apartment 8, teaches math at a college. She lives alone and has few worries, scarcely any relatives, and an occasional furtive affair with another professor,…

Angrily, but with great care, Mario placed two oars in the boat and went to his father’s house to fetch the gas cans. Javier had already brought the coolers full…

Welcome to this house / your home, / here you breathe the bitter cold / of that absent breath.