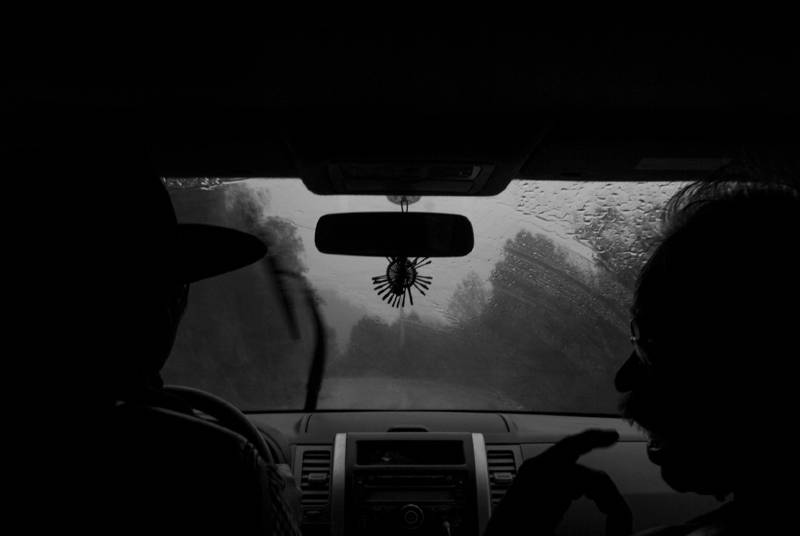 It can take days to climb a mountain, or the blink of an eye. On the way, the mountain will show you, little by little, her body. What makes her habitable in spite of her inhospitality. At her peak, you’ll feel so small that the slightest breeze could easily blow you off your feet. It’s hard to climb a mountain without company. The strength to do so comes from walking as a collective, from sharing life: water, trust, hope. When you climb back down her, all that green stays on your skin and all her voices become part of your memory. The mountain grows small. She remains within you, and you can share her as if she were a song. Those of us who were born climbing up and down the mountain carry her in our hearts: a little mountain, the strength of our spirit.

When the time of hunger comes, the poets of my people climb into the mountains to ask the lightning bolts to send down rains. The water falls with its flash-of-thunder voice and feeds the people. They are the poets of the lightning bolt, the poets who safeguard the history of our words and bear the gift of bringing rain, of making water spring up from the stones. Our words give life to poetry, and our mountain gave life to words. If there is no world to name, there can be no poetry among the Mè’phàà of the mountain.

Today, the mining companies take an interest in our mountains:

In recent years, the territory of the indigenous peoples of La Montaña and the Costa Chica of Guerrero have awoken the interest of the mining sector owing to the 42 ore deposits found within the area. The federal government of Mexico has granted approximately 38 fifty-year concessions, allowing various companies to undertake exploratory and extractive mining activities in the region of La Montaña without taking into account the rights of the indigenous Náhuatl, Mè’phàà, and Na Savi peoples. The land deeds assigned in the region cover an estimated 200,000 hectares, all of which are currently in the exploration phase.1

While some have taken measures—as in the case of San Miguel del Progreso, a town in Malinaltepec—the problem continues. The concessions have not been conclusively cancelled.

If carried out, these projects would imply the displacement of indigenous peoples, the arrival of organized crime groups, and the prohibition of the ceremonies, agriculture, and hunting that serve as the bases of the knowledge and identity of community life. In La Montaña, we endure constant harassment from paramilitary, military, and criminal groups that dispossess us of our land through violence. Our people have resisted. If they take our land, they take from us the possibility of being Mè’phàà.

Traveling to the Banff Centre for Arts and Creativity in Canada was one of the most beautifully painful experiences I’ve ever had. I am from the mountain, and I know what that means in the memory of a people: seeing landscapes and finding names empty, without the history behind them, means people were displaced from here. The names of their lands remained, but they did not. Here in Canada, the mountains are well taken care of, the rivers are crystal clear, the air is pure, the elk grow up healthy.

I think of the mountains where the Canadian mining companies operate. They are, in my region: Leagold, Gold Corp, Newmont, Minaurum Gold, Newmont Vedome Resources, Hochschild Mining, and Torex Gold Resources, considered until 2015 “the biggest gold mine in Latin America and the leading gold source within Mexico, located between the towns of Mezcala and Carrizalillo, Guerrero.”2 This is one of the areas with the highest rates of violence caused by criminal groups, along with armed groups deployed by the government or aligned with political authorities.

Communities are displaced with irreversible damage to health: cancer, respiratory illnesses, genetic deformities. Earth, air, and water are no longer life, but rather poison, loaded with heavy metals. Instances of murders and forced disappearances, linked to the impunity we suffer in these lands, have run up into the dozens since the mining companies came. Once green hills are now pits and cyanide rivers. At this rate, the world will end up as great reservations for the rich: places of beauty that will come at the price of the deaths of other mountains, like my mountain. The mountain that lives on my tongue and on the skin of the children born of my people.

The photos included were taken by Anya De León in the Mè’phàà community of La Montaña de Guerrero.

Folding and refolding origami frogs, extracting the symmetrical veins from leaves, retreating to an imaginary world in his closet: after Teresa walked out the door one July afternoon in 1994,…

Before it was a reality, the pandemic was a movie. We never paid too much attention to such apocalyptic stories, convinced that fiction lived only in our imagination. Only now…

Alberto Chimal’s Twitter novel, Ciudad X: Novela en 101 Tuits, was originally published on Twitter on October 10, 2014, and subsequently in print version a year later, along with another…