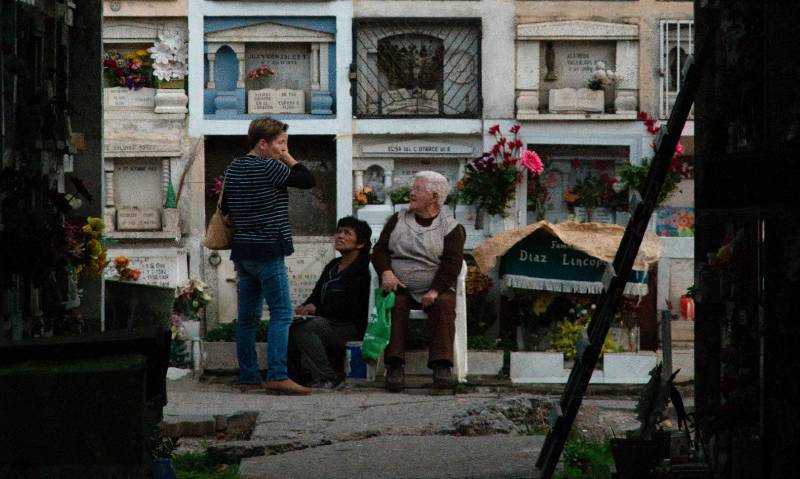 A Nice Night to Dance to Rock

Tonight is a nice night to dance to rock.
We brought my father, dead, from Santiago,
the family wanted to see itself together at last:
our mother only ever took orders from the family.
“You’re the one who’ll go with your father in
the hearse.”
Fine, I agreed, and I went to buy cigarettes.
On the way out of the city I asked the driver to turn on
the radio, we started smoking.
“My father used to smoke too,” I said.
On the highway, he looked for a station;
the radio sounds bad out here because of the mountains.
“Let’s listen to a cassette,” the driver said.
We put on the tape, a selection of Argentine rock,
and then he asked if I smoked weed.
We smoked while we drove on through the mountains
down the highway.
When we arrived, we lowered dad’s coffin
and I thanked the driver for the trip.
Today, like eighteen years ago,
I think of the one I have to bring from the big city
so the family can be together,
so the family can be happy.

On the fourth visit
I chose to keep quiet.
The judge asked me for explanations, evidence,
I asked them to turn off the heating,
she insisted again about the evidence,
I asked her to decide promptly,
fifty thousand is fine, she said,
I can’t manage that but I didn’t speak up,
I thought of the car’s broken window,
the dog who’s been tearing up the yard,
the photos my eldest son gave me from an
old album:
here we’re all together on a beach.
How I’d like to avoid the antidepressants
my son takes,
the ones my mother takes,
eating seafood by the beach with our families.
The album is evidence of happiness.

The crystal-clear image of electricity came to me
—electricity I went without in the house for a week—
a neighbor gave me energy with an extension cord.
I watched the news before the dark house,
I watched my shadow making tea or looking for a
pencil or a bag.
The dark house made me think of the details
and issues of the day;
of course, I didn’t want to think of anything strange
or wicked,
nobody wants that when the house is dark.
At the Hotel Almagro, I decided to walk through the city,
I had heard good things about it, but all the same
I ended up in the cemetery;
I came back thinking: What a nasty cemetery,
what nasty people!
At dinner the waitress asked me about the city;
I answered: the people here don’t love each other much,
the cemetery’s at rock bottom.
Ah, well, it’s been awhile since I’ve been,
my daughter and my husband are there, an accident, you
know.
No, I don’t know, I answered, and at that moment I left
in the dark,
the electricity had left me behind,
and I could see my shadow and hers
groping around among plates and tablecloths
but someone turned on the light of the
service bell
and our shadows returned to our bodies:
electricity returned to writhe through our lives.

The three selected poems were first published in the verse collection Dónde iremos esta noche [Where are we going tonight], published by Ediciones Inubicalistas in November 2018.

When he got home hours later, Felipe confirmed, with astonishment and dread, that his wife had actually left. According to their agreement, Julia had taken half of everything, plus what…