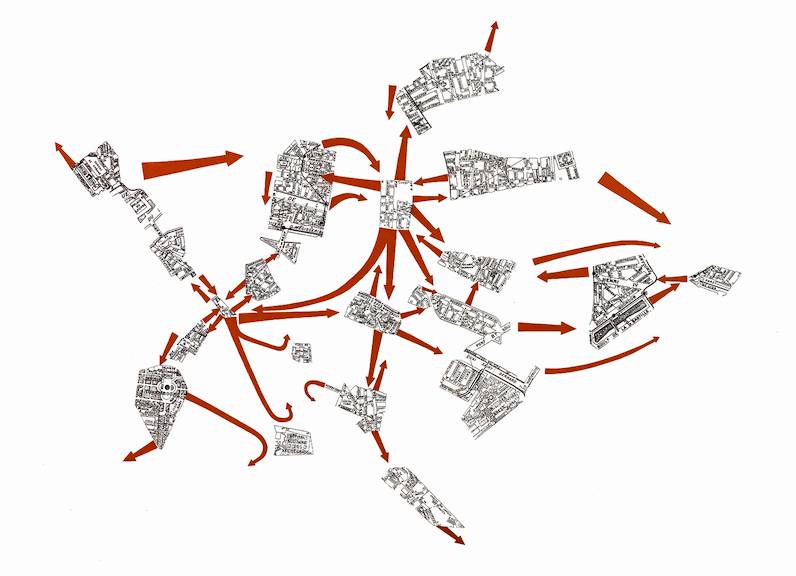 Not a voice, but voices / not a river, but Dark Rivers, merging

To row up the dark river
against the current,
to take the unknown road
blindly, stubbornly
and to search for words rooted
like the knotted olive tree.
Giorgos Seferis

Seferis leads me directly to Dark Rivers—Oscuros ríos in Spanish—a book by Chilean poet Juan Carlos Villavicencio. In Villavicencio, Seferis’s river splits into many rivers, but the road is similar. Navigating against the current, following the tracks, searching for what was left on the road, finding the necessary words to utter the nameless. Both depart on a return journey in which history and memory merge; both depart on an impossible, erratic, blind, silent return, with austere language as their only defense.

The first poem to open the book speaks precisely of that chiseled silence among words, of that faded song:

The men didn’t notice
eyes strung to masts without song:
the silence
steadily
enclosing their colossal walls
immersed in darkness.

And the book closes with verses that reiterate this initial silence: “A bow // a lyre // the blood / the shadows / the city // the cruel return to the initial silence // Again.” This is the eternal return—we escape silence only to come back to silence.

Silence is tension and contention in Dark Rivers: the bow (war) and the lyre (song), poles which rotate throughout the volume, straining and tracing possible deviations, as shown, perhaps, by Guy Debord’s psychogeographic map on the cover.1 This may explain why Villavicencio chose Heraclitus as an interlocutor and fragmentation as his poetic form. Parallel monologues touch at an impossible point (an improper point2) to stimulate possible dialogues. Not a voice, but voices; not a river, but Dark Rivers, merging.

First of all, there is the voice of Heraclitus, the Dark one, which is the book’s axis-voice, but which also diverges into other voices: Borges (There are fourteen seas and temples), Neruda (From air to air), Blake (If the doors of perception were cleansed every thing would appear to man as it is, Infinite), Juan Luis Martínez (The universe is a ghost’s attempt / to become reality; and There was never any route or sign), Gonzalo Millán (The river flows against the current). It seems that, just as Heraclitus, Juan Carlos Villavicencio uncovers and conceals at the same time. What he says indicates the spoken and unspoken—and from these other voices, new paths emerge. This forms part of the strength of Villavicencio’s words, as if they were simultaneously word and remnant, or word and echo.

Let’s examine some of these deviations, the intertextual crossroads and their implicit displacements:

There will be no peace when you fall.

The universe is a ghost’s attempt
to become reality

Eternal war this raw time on our earth.

If we could find water there…

Fragment XXIV both enumerates and juxtaposes six apparently independent sentences; however, beyond our eyes and ears, a web is being woven in silence. The axis-voice of Heraclitus is present like a remnant to Villavicencio’s words: “Gods and men honor the fallen in war.” And, as a reply, perhaps from behind that “dead tree,” the voice of a woman poet emerges from the Hein period, Ono no Komachi: “I too am a fallen tree,” which Juan Luis Martínez refers to in the section “Reality I” of The New Novel, engraved by Villavicencio through the older poet’s words: The universe is a ghost’s attempt / to become reality.3 The note included by Juan Luis Martínez at the end of this section reads: “‘Nothing is real’ Sotoba Komachi.” This lack of reality which characterizes the Noh theatre style also establishes the atmosphere in Dark Rivers, a book of poems that navigates without a compass, and where dreams, ash, footprints, shadows, and echoes are recurrent.

In this strange phrase placed between brackets and surrounded by silence, the poet and philosopher confront each other. Villavicencio comes out defending the poets, that is, defending himself, since Heraclitus, precisely in fragment 42 of his Fragments, says: “Homer deserved to be thrown out of the contests and thrashed, and Archilochus too.” As opposed to Heraclitus, who condemns the poet as a teacher of falsehood, and Plato, who, following Heraclitus, expels Homer from the Republic, Villavicencio situates poets in the center of the res publica, “public affair” (the opposite of privatized language in any dictatorship), and frames their voices from the outset: Gertrude Stein, Samuel Beckett, Giorgos Seferis, and T. S. Eliot open the book, while Homer guides the first fragment with the myth of the siren song. Although in this case, as in Kafka, the sirens don’t sing and the myth is reversed—silence is as powerful a weapon as song. In his story, Kafka writes, “the Sirens have a still more terrible weapon than their singing, namely their silence. It has not happened, but is perhaps conceivable, that someone could have saved himself from their singing—from their silence, certainly not.”

The negative of myth, the reversibility of history are speculative ventures shimmering in these Dark Rivers. This can be observed in fragment XVI:

The river flows against the current.

Still wounded, the moon exposes cracks in the light.

What seems concealed is happening
even when no one wants to see.

The slight trace of fear burning
a labyrinth toward the future.

The face of a woman from that distant past

The cowardice of a torturer spreading through the city.

The beginning and end of the fragment allude to poem 48 in Gonzalo Millán’s La ciudad, a poem that masterfully simulates history’s reversibility: Allende lives, Neruda is born again, and the Chilean people overcome the trials of the September 11, 1973 coup d’état. However, the inconspicuous, whether intentional or not, defies simulation and, in this clash, Dark words surface again, like wakes, like shadows, as in fragment 16, when the speaker asks, “How can one escape something that never disappears?” “How can we escape the cowardice of torturers?” According to Nietzsche, Heraclitus’s great finding is the idea of “the world’s regularity units.” How, then, can we break that repetition and create new possibilities? We’re dealing with the tension built up between past and future, and we’re also dealing with the present as a place from which to think and imagine the possible: the cross or the circle.

Villavicencio introduces the cross (XLIV) and circle (XLIX) as centers of thought, like tautological calligrams that take a cue from Apollinaire. In the circle, we find Blake (“If the doors of perception were cleansed every thing would appear to man as it is, Infinite”) and in the cross, Christianity (“It is the people who carry their destiny like a cross on words that turn murky among fear and injustice the verdict our daily breath”). But behind the cross, the words of Heraclitus are filtered as a response, as in fragment 44: “The people must fight for laws, just as they fight over walls.”4

If as Mario Montalbetti suggests in his recent book, El pensamiento del poema, “the poem is an operation on language, the poem only speaks of words and phrases of language,”5 Villavicencio carefully chose his interlocutors in the impossible dialogue present in Dark Rivers. This intertextual dialogue takes us back to the beginning quote: “to search for words rooted / like the knotted olive tree.” The Chilean poet is indeed searching for those words, those intermittent phrases, those other fragments to build his own fragments. He is also searching for a root, for an origin.

This is apparent even from the cover, where, under the title—but as part of it—we find the name of Heraclitus in Greek letters: the axis-voice navigates the poems with the Chilean poet to the final text written in Greek. This closure of Dark Rivers, with an illegible text for most readers, is however not incomprehensible, for we recognize the words as a root of our own language. For the non-Greek speaker, these last two pages are only a sensorial mark, a graphic symbol which, as Montalbetti would say, promises meaning, but never delivers it. Villavicencio’s book thus ends with a promise that thrusts us into an uncertain future. It also ends with the initial silence of the sirens: the letter is gone, but nothing is heard; we see the symbols, but they don’t tell us anything.

The book’s insistence on mutism and the allusion to the Odyssey evoke Kafkian reminiscences, as mentioned earlier, but they also remind me of an essay written by Argentine novelist Juan José Saer, “Quijote’s Lines,” which coincidently returns to Kafka. Saer writes, “We also want to find something that goes beyond that silence, but we’ve clearly forgotten, perhaps forever, the ability to forge the symbolic pact that allows us to break that silence, which is universal [… ] From here on out, as long as the sea, the air, and the stars surround us, we’ll keep living in the silence of the sirens, fighting each other in the raw material reality and splashing around in the swamp of the empirical.” It seems to me that like Saer, Villavicencio also points to the rupture of all symbolic pacts. The poet, confronted with that brutal reality, without gods or myths, speaks through the voice of others, through other words which he makes his own, forging from them a continent for his voice.

Desperation of those who have lost the trail
that would take them back South.

Eyes lost resisting the torture
every time the sun rises
or begins to set.

The ears tolerate stubborn words
from false prophets without mercy

Falling statues of those who once could see
and lost.

Godly silence or the silence of a god.

1 The idea of “deviations” was inspired by a review that Martín Gubbins wrote on Dark Rivers, highlighting the importance of this psychogeographic map.

2 A point of infinity; for example, the intersection point of two parallel lines.

3 Villavicencio kindly directed my attention to the origin of this phrase. Here is the transcription of the quote he sent me: “Where have I seen this? Nowhere, everywhere, because man is half reality, half dream. Some years ago, I wrote this sentence: The Universe is a ghost’s attempt to become reality. As I contemplate Miro’s paintings, I cannot but repeat that sentence. Ten times in front of each painting. Joan Miró represents the dematerialization of the material needed to become new material. And no one has painted the insides of his eyes with more economy of means. That is his strength and richness. The strength of not wanting to be strong, the richness of not wanting to be rich. If there was a painter capable of creating emotion with a dot, that painter would be Joan Miró… And the sun is part of the family—that’s the secret of the economy” (Huidobro, Vicente. Joan Miró. “Cahiers d’Art” V. 9, No. 1-4 (1934) 40-42. qtd. in Cirlot. Joan Miró. 1949: 23).

4  It is important to consider these word-traces, this axis-voice of the poems, in the light of recent events in Chile.

5 Montalbetti’s text is only a pretext to consider this phrase literally, since the idea developed by the Peruvian poet is much more complex.

Cover image: “The Naked City” (1957) by Guy Debord, from the cover of Oscuros ríos by Juan Carlos Villavicencio (Descontexto Editores, 2018). 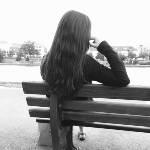 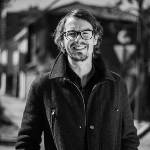 The Mysteries of Creative Writing

When I began writing in the late nineties, the last thing on my mind was looking up whether there was a university program in Creative Writing. In my long experience…

Sergio Ramírez: "I do not know of a single novel that has brought about a revolution": A Conversation with Tulio Hernández

Author Sergio Ramírez was invited to Bogotá by the mayor in the first week of March 2018. He still seemed to glow in the light of the Cervantes Prize, announced…