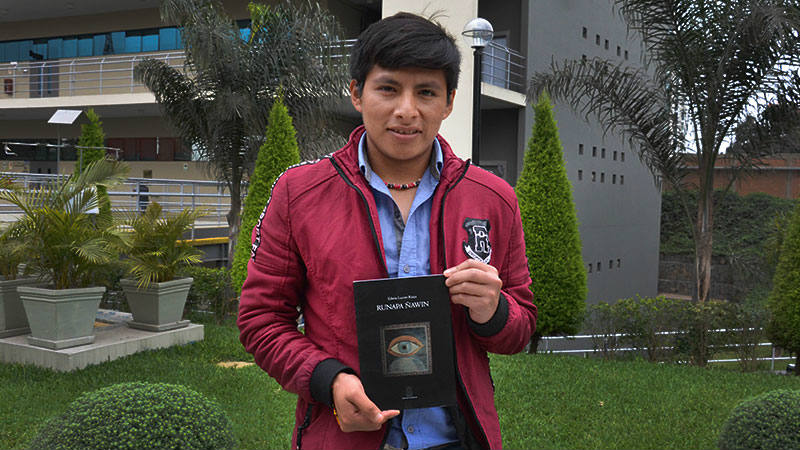 “I decided to cultivate that hidden voice to make the unknown voices of the Kañaris present in literature”: An Interview with Edwin Lucero Rinza

Edwin Lucero Rinza: I was inspired to write by nonexistence, by a deep emptiness I saw in Quechua literature: the thought-feeling of the Kañaris, as a people with a living voice. I felt that, faced with literature, we were like a nation without expression, like a talkative mute, or like a deaf man who hears, a dead man who cries out for freedom. I saw that a Quechua nation cried out in silence, with hidden joy. So I decided to cultivate that hidden voice to make the unknown voices of the Kañaris present in literature, and to make them known as Quechua-speakers with their own culture.

My reason for writing was the great emptiness that the voice of my ayllu was feeling, not being read or known as a Quechua nation. I was also motivated by the empty and hidden expression of my parents in the face of a society that didn’t know the Kañaris as a Quechua people. My ayllu was like a drawing with no message of its own, it was there but it had no voice, so I published the first literary work to arise from the voice and the thought-feeling of the Kañaris. Now I feel relieved, because I feel that the Kañaris are now in the eyes of society as speakers of Quechua.

W.M.: How did the decision to write poetry in Kañaris Quechua come about?

E.L.R.: It arose from the moment I reclaimed myself as a Quechua speaker, when I came to understand that the historical process of my formation as a Quechua person was almost dead, when I understood that my true essence is Quechua and that I have a commitment to my Quechua nation. My academic studies also played a part in all of this, making me feel proud and see the importance of my Andean cosmovision. I felt a sort of anguish when I wasn’t doing any work that involved me directly or indirectly with this voice that couldn’t be raised up by the other ayllukuna. And I saw a group of young people who spoke Quechua and were Quechua, who understood themselves as such, and I was almost completely isolated in my own Quechua. So I took advantage of my talent for writing poems in the voice that belongs to the Kañaris.

That is how my decision to write poetry in the language of the Kañaris came about. It was like a phoenix for Kañaris literature, to rise from its own voice with its own linguistic codes.

W.M.: And the decision not to translate to Spanish?

As the author of Runapa Ñawin, I decided to put the language of the Kañaris first, because I think the most important value is the cultural, historical, and linguistic value of a people, not the economic value of a book.

W.M.: How is your relationship with poets who write in other varieties of Quechua in the Andes? Are there possibilities for dialogue?

E.L.R.: The relationship between contemporary Quechua poets is a little lopsided, but with certain permanent structures. Although we’re social beings, individualism has sent us down different paths, but the dialogue between us as Quechua people and defenders of the language of our ancestors, as representatives before society, is carried out through activities we promote in Quechua poetry readings and contests organized within our universities.

W.M.: Your poems often talk about personal feelings of nostalgia or desolation, and sometimes they talk about the contemplation of nature through verses that allude to sacred songs and prayers. Are these feelings that live in the character of Kañaris culture?

E.L.R.: The Kañaris express these feelings, these emotions, these angers when we see that our guardian gods are indifferent to us. But the attitude of a Kañari is not an attitude of rebellion, but rather an internal drive to amend acts against nature.

The same expression emerges when nature acts against us, and in this way my poems show a clear reflection of the thought-feeling of the Kañaris. Also present are the concerns we feel in the coexistence between ourselves, our cosmovisions, our beliefs, all things expressed by the Kañaris.

W.M.: Would you like to tell us anything else about your Kañaris nation?

E.L.R.: Kañaris is located in the Province of Ferrañafe, specifically in the northeastern part of the Department of Lambayeque, in an offshoot of the Andes mountains. The beginnings of the Kañaris district seem to have taken place in the land now known as Ecuador. It may have begun with the forced migration,  or mitma, of the Cañari people of Ecuador, brought by the Incas in order to impose military control over the northern region, which was rebellious against the Inca empire. Our principal activities are agriculture and livestock.

The Kañaris are an ethnic group, and as a people who have lived in our lands since time immemorial, we defend our environment. The Kañaris are defenders of our lands, of our resources, of our territory. We are also a people who believe in our guardian gods, we have a deep respect for our apus, for their cosmic energies. The Kañaris enjoy a wide range of products in our three tropical climates, and we grow coffee, cacao, and oranges, among other fruits, in the lowlands; in the highlands, we grow potato, oca, olluco, etc. In the midlands, we grow corn, beans, peas, etc. As far as the Kañaris’ celebrations, the twenty-fourth of June is the festival of our patron, when we pay homage to our patron saint John the Baptist.

Edwin Lucero Rinza is the son of Luis Enrique Lucero and Felicia Rinza. He was born in the Kañaris district of the Lambayeque region of Peru. He is the fifth of eight siblings, he completed primary and secondary school in the Kañaris district, and he is currently a student of Intercultural Bilingual Education at the San Ignacio de Loyola University. He is an author and editor of poetry, as well as a promoter of the Quechua language in multicultural contexts.

Fogwill: From the Archive

Fogwill was always there, intimately linked to my life. He’s still there, too: in part from the wound his absence has left in my memory, and in part because…

The hollow-eyed hen / laid the greatest egg in the world: / the fine white lines of her claws / grip the ground in devotion / as she clucks, and…