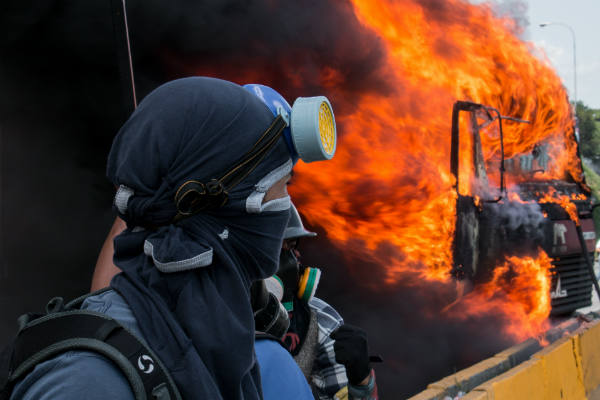 We present this latest issue of Latin American Literature Today in the midst of a dire humanitarian crisis that is bleeding Venezuela dry. The dictator Nicolás Maduro—recognized as such by the majority of the democratic countries of the world—clings to power, against international pressure and, even more importantly, against the desires of his own people, demonstrated on the streets in the mass protests of January 23rd. The situation, beyond any partisan politics, is desperate and critical. We hope Venezuela will soon find a peaceful path (without military interventions of any kind) toward the reestablishment of democracy and the healing of its political institutions, long held hostage by the present Chavista regime.

The case of Venezuela is unique, but it leaves a familiar bitter taste in our mouths. In our most recent issue, dedicated to the writer Sergio Ramírez, we recalled the terrible situation in Nicaragua. For the same reasons, we offer an embrace of solidarity to the countless Venezuelan brothers and sisters who live with us here at the University of Oklahoma, and to their families, whether here or there. We send our best wishes to all of them, and also to all the Venezuelans spread throughout the world and all those who resist a military dictatorship in their own homeland. Because there can be no doubt: there is no other name for a government held up by force of arms.

And so, we present a new issue of Latin American Literature Today, with our ears attentive to the realities of our countries, but also taking note on the seismograph of the United States of the presence of Latin voices that do not cease to emerge in the north of this continent. We begin in the Southern Cone with a wonderful dossier dedicated to the Argentine author Samanta Schweblin, curated by a close friend of the journal, the Argentine critic and writer Pablo Brescia. Schweblin, now based in Berlin—perhaps following our long tradition of expatriate writers—writes from Europe and in Spanish. But that’s not all: her writing tiptoes along the narrow edges of reality, where the strange and the fantastic permanently come together and grow apart. Samanta Schweblin’s books, as Pablo Brescia puts it in his introduction to this dossier, “are little shudders of strangeness. For attentive readers, those who prefer to get to the guts of the unfathomable, […] they are a challenge, asking us to think about literature from the abyss of our possibilities.” In any case, Schweblin’s writing interrogates those liminal zones of reality where all interpretations fail, an obligatory journey for all those who feel most comfortable far from representations of reality.

This issue’s second dossier is something new for Latin American Literature Today. It is dedicated to Chicanx literature, and it has been prepared by RC Davis, executive director of World Literature Today and of our journal, and author of Mestizos Come Home!  Making and Claiming Mexican American Identity (International Latino Book Award 2017). This important literature is little-known in Latin America, and we are proud to help raise awareness of this body of literature with a long tradition in the United States. This dossier also demonstrates the incredible cultural richness of the Latino population of the United States. Their literature never stops growing, and it is in no sense limited to Spanish. Far from a problem, this has become an advantage: Latinos are now an ever-growing cultural and political force in the United States. RC writes: “Latinos are reshaping how people define themselves as ‘Americans,’ what Americans look like, how they act, how they build and maintain communities, and how they see the world.” Indeed, Latinos are a powerful minority, full of energy and with a future in the USA whose statistics are are emphatic as they are inevitable.

Poetry is never absent from LALT. This time, we turn to a poet who has received remarkable literary recognition in the past year (2018) with the Reina Sofía Prize of Iberoamerican Poetry: Venezuelan poet Rafael Cadenas. The prize jury called Cadenas: “a man who has given us doubts, certainties, words, reflections on the word; who had to go into exile at a young age […] and the poetry of those years has become a poetry of all exiles, of interiors and exteriors.” This dossier was prepared by our Associate Editor, another Venezuelan poet, Arturo Gutiérrez Plaza, who, from the tumultuous city of Caracas, sends us a selection that honors not only a single poet but Venezuelan poetry itself.

Mapuche poetry returns to LALT thanks to Paula Miranda, a professor of the Universidad Católica de Chile, who, along with Andrea Vargas, has compiled a previously unpublished selection of works by María Lara Millapan, Daniela Catrileo, Roxana Miranda Rupailaf, and Adriana Paredes Pinda. Young Mapuche women, poets, all new voices that have been evolving for some time and that we are now proud to bring to the readers of Latin American Literature Today. “What is there in these works?” asks Paula Miranda, “Despite that not all the women poets were born in traditional Mapuche communities […], all were finding in poetic writing ways of reintegrating themselves with their territorial identities (tuwün), families (küpalme), and indigenous wisdom (kimün), bequeathed to them by their communities, but denied to them by the official Chilean culture. Almost all of them speak from their condition as exiles from their own language and territories.” A reflection that reminds us not to forget the complex relation maintained by indigenous peoples with the land, with historical memory, and with ourselves.

And so we have assembled this issue of LALT, with interviews, book reviews, previews, and many other new features from the world of Latin American literature. One of them is a fascinating interview, prepared by Roberto Brodsky, of Mark Eisner, the author of the latest biography of Chilean poet Pablo Neruda, Neruda: The Poet’s Calling (2018). A lucid, insightful, and informative conversation, which is just what we need, especially now when the image of the Chilean Nobel Prize winner seems prone to suffer a mortal blow as a result of new readings of his personal life. We mustn’t read Neruda in a contextual vacuum, as if he had never written an ode to Stalin; nor must we stop reading him for this reason or others, better or worse. In this discussion, Mark Eisner’s book has much to say.

We bid our readers farewell, hoping this new offering meets their expectations, wishing the best to Venezuela, and keeping Nicaragua in our thoughts as well. We say farewell and, as we do so, we travel toward the past, and in our journey of memory a marvellous, political song, heavy with anger and hope, rings through the labyrinths of Latin American history. Its title is “Para que nunca más” [Such that never again], and it was composed in another dark time by a group called Sol y Lluvia, icons of cultural resistance against the dictatorship of General Pinochet. We are in another time now, but the strongmen are the same: they have only changed their faces, changed their flags, and embraced new or old causes. What does the mask of the dictator matter when people have nothing to eat, hospitals are empty, and families are separated, scattered across the world, shaken by violence and abused by an illegitimate, brutal government? We have witnessed these nightmares for too long, for too long…

It is no coincidence that this new issue of Latin American Literature Today is dedicated to the Nicaraguan writer Sergio Ramírez. One of the reasons is literary; a reason that…

She never imagined there’d be so many. She’s running late so she isn’t able to count them, but she’d say there’s at least fifteen. Even though it’s a Saturday night….