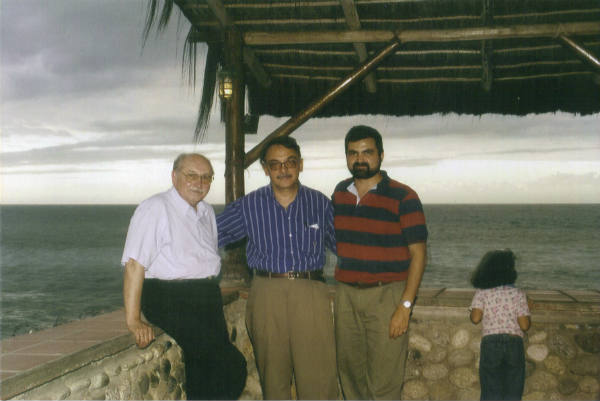 Eugenio Montejo: A Living Presence Ten Years After His Passing

Never foretell your death in verse—he said to Evtuchenko—since the strength of the word is such that, with its power of invocation, it would drag you to the death foretold.

Eugenio Montejo (1938-2008) was not only a poet, a creator of poems. He was, above all, a man who sought throughout his life to make of life, and of his poetry, a full and continuous communion with the mystery of existence. While he found in heteronomy a path to form the distinct intonations, daydreams, and rhythms that would combine into the polyphonic chorus of his poetic creation, made up of his curious pseudonyms or colígrafos (Sergio Sandoval, Tomás Linden, Jorge Silvestre, Lino Cervantes, Eduardo Polo, among others we will never know), he was also one among them, the most discreet and dedicated interpreter of the teachings of the master of Puerto Malo, his venerated Blas Coll. As a tribute to this “essential heterogeneity of being” mentioned by Antonio Machado, the work of Eugenio Montejo slowly gave way to the continuous unfoldings of his vision. Out of this “oblique” vision, as he preferred to call it himself, the poetic being called “Eugenio Montejo” was also born. He told us this in a poem appearing in Trópico Absoluto [Absolute tropic] (1982) entitled “Final Provisorio” [Provisional ending]:

And indeed, this poem, the only one that speaks to us of “Eugenio Montejo” in all of his work, is merely a provisional announcement. His path continued, as it secretly continues still. We receive news of the life journey of this poet in various poems. Today, faced with the knowledge of his death at the cusp of his seventies, we cannot help but read with wonder a poem written when he was thirty-five, entitled “Media vida” [Half life] in a clear allusion to Dante’s verse (“nel mezzo del cammin di nostra vita”) and to the well known Jungian notion; a poem that puts forth an enigmatic poetic premonition:

[I felt the sorrow of half life
when the dragon rolled before my feet, dead,
that dragon that over the years
left blood on my sword,
swipes of the wing
and fires with which I fought alone, without quarter,
at every instant.

I recalled the roars night after night,
(…)
the books I read to placate him,
old poems with which I kept him in line.

I felt the sorrow of half life
when the turmoil ceased
and I realized that my soul was his cave,
and that I was my dragon, my immediate enemy]

This poem belongs to Terredad [Earthdom] (1978); at that time he had already published Algunas palabras [Some words] (1976), and with these two books he would begin the search for a complete opening to the world. He had left behind the first phase of his work, made up of Élegos [Elegies] (1967) and Muerte y memoria [Death and memory] (1972) and the first half of his life, in which the intimate surroundings of family, the anguish of death, the ghostly, and solitude would be the elements around which his poetic atmosphere would gravitate. With the “dragon” defeated, dead “at his feet,” kept in line with “old poems,” the poet undertakes a different dialogue with existence. His interlocutors will now be trees, birds, roosters, stones, light, the cosmos, the tropics—all in all, nature itself and his longed-for “terredad,” a neologism demanded by a deep expressive necessity that, like no other word in his work, will characterize it. Now, at this stage of his existence, it is the birds to whom he listens:

[I hear the birds outside,
others, not the ones from yesterday that we lost,
the new innocent songs.
And I don’t know if they are birds,
if someone I no longer am still listens to them
at half life under the sun of the earth]

If in the poem “Un año” [A year] from Muerte y memoria he calls himself “an old man of thirty-three turns around the sun,” the age at which he begins “another descent / to hell, to winter” and affirms that “The leaves of the trees bleed in me,” in another from Trópico absoluto, “Poema de cuarenta años” [Poem of forty years], it is no longer traces of blood but rather “green colors” that mark his life:

[Forty steps give way to a path
and forty years more than half a life,
what remains is the round turning of time
(…)
Until you are forty you don’t know
that all colors are green,
that words are masks fallen
into wells of silence]

In “La hora cincuenta” [Hour fifty], the poem that closes the 1988 edition of Alfabeto del mundo [Alphabet of the world], “the others” appear—others who inhabited him throughout his life, others who wrote his poems:

[Of that which came with me when I was born, what trace remains
at hour fifty?
It dawned and was night;
suns passed carrying off my days,
one after another, from daydream to memory.
I was this one, that one, so, so many
who spoke with my voice, went along
holding my hand, at random, dressed in my clothes,
sharing love, solitude, poetry,
until their steps became absent.
(…)
I never wrote anything. —It was them.
Hour fifty falls over my life
when not an echo of their voices remains.
They lie sunken at the bottom of their nights,
far away, in another space, in another world,
but I know that somewhere they are still awake:
life has been everything but a dream]

He tells us of his sixties in the poem “El duende” [The spirit], with which he opens Fábula del Escriba [Fable of the copyist] (2006), the last verse collection he published. But now, unlike the poem referring to his fifth decade, his visitors are not the absences that stayed behind in his youth. Now the poet remembers that “aboard” his “twenties, / from night to night, with tobacco and a lamp, I used to write poems,” visited by the spirit that, with “fixed eyes,” “followed [him] / phrase by phrase and letter by letter.” A spirit that was none other than that of the present moment “—that / which now figures sixty”:

[He who here returns, looking for me as a youth,
on this same street, at midnight,
and calls me
and is no dream]

In “Para mi ochenta aniversario” [For my eightieth birthday] from Trópico absoluto, the poet indicates:

[The eightieth year is an imprecise limit
in which I see and do not see myself,
found so far from this time,
and so uncertain
that although no friend is missing
perhaps by then I will be the absent one]

Eugenio did not tell us about his seventies in any poem. He died on June 5, 2008, not long before turning seventy. For a long time, I had the privilege of being very close to him and his work; we were united by a long and dear friendship. For a long time I have wondered how such a poem would be. What he would tell us of that time. One afternoon, many years ago, he gave me a folder containing the originals of the different versions of a beautiful poem entitled “Final sin fin” [Ending without end]. I have read in wonder, many times, the thirteen versions, successively edited, that he gave me. There I could trace, once more, the tracks of his humble and patient vocation, a vocation learned in his “white workshop,” I could appreciate the construction of this “melodious chess” that, for him, was the poem, his silent dialogue with God. Now, I think I understand that this poem was destined to make up for the absent poem, the poem that would account for his seventies. In these drafts he gave me and in the definitive version that forms part of Fábula del escriba, preceded by an epigraph from Juan Ramón Jiménez that reads “…And I will leave,” he leaves us his goodbye, but also a testament to his permanence, that living presence to which we bear witness today, ten years later:

[What will leave, in the end, will be life,
the same life that has taken our steps
without pause, at the speed of her desire.
(…)
When it’s time to go –life will leave,
life and my quick music in my veins

life and her melodious geometry
that invents the chess of these words.
(…)
Yes, perhaps no one moves away from this world,
even if everyone is extinguished in due course.
–We will leave without leaving,
no one is going to stay or go,
just as we have always lived
on the banks of this indecipherable sleep.
where one is and is not and no one knows anything]

Arturo Gutiérrez Plaza (Caracas, 1962) is a poet, essayist, and university professor. He has published books of poetry, essays, and literary research, and has received several awards and contributed to numerous international journals. He is Associate Editor, correspondents’ coordinator, and co-founder of Latin American Literature Today. His writing has been featured in anthologies published around the world and has been translated into various languages. He is currently a Distinguished Visiting Professor at the University of Oklahoma.

“The blood of the sapota in exchange for the blood of the gum collector,” reflected Doña xTuux while she cleaned the body and carefully lifted the water from the bath…

It All Makes Sense Here

There are two men in the video.  They’re walking between the cars through the parking garage.  The camera is attached to the ceiling, or maybe to one of the concrete…