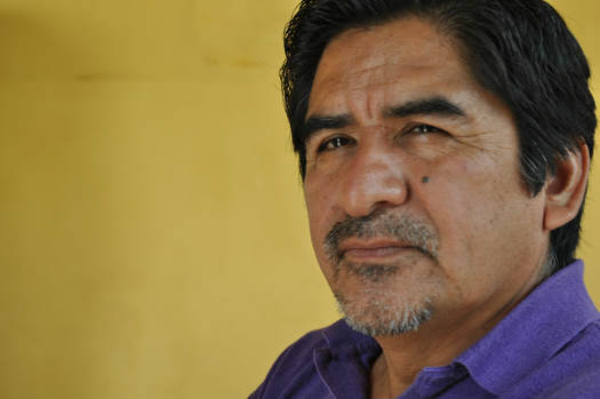 It seems like the heavy rain is gone, I hear a lot of water flowing in the streets outside the house. Even though the downpour has passed, it’s still drizzling, but I think I won’t get too wet if I go out now. So I grab my red raincoat, the one I brought from the States, and put it on. I don’t want my shoes to get wet, so I take my old huaraches and put them one, then I roll up my pants to my knees and grab a hat from the wall and put it on.

I want to go and see how my house withstood the rains. I open the door and looked both ways, toward the cemetery then towards the church. The streets are very quiet.  Not a soul, not even the dogs that are usually out.

I step out and walk to the corner. I turn and walk downhill.   I walk through a big puddle that has collected there from the waters flowing down the hill. Then I thought, “There is no mud.”

I remember before the streets were paved, the water would make a rivulet right in the middle of this street. As kids, when the rains had stopped, we would go out. We went to see what the water brought: nails, bottle caps, sometimes even money. But now, even if the children came out, what could they look for?

In the afternoons, when it had gotten dark, the fireflies would come out.  We were just kids, so we catch them and smear them on each other’s clothes. Back then, the toads that came out from the mud would croak. Now, there are no fireflies, no toads, no mud.

It’s Tuesday. As I was waiting for the rain to stop, I was sitting in the covered patio at my dad’s, listening to music on my phone.  I don’t even had a radio. It got so that I couldn’t hear the music over the noise of the rain on the metal roof that hangs out over the door to my dad’s bedroom.

I was thinking while I was sitting there, I remembered when this covered walkway was being built before I went to the States. In the evenings, my friends would hang out in the walkway as it was being built.  We would tell stories until my mom called me to help husk the corn and to get the dried corn off the cob for the nixtamal for tomorrow’s tortillas.

Now, I wonder where they might be, these friends. Since I’ve come back to the pueblo I haven’t seen any of them. I know that some of those kids that I grew up with have returned as well.  Where are they?

Sometimes they speak only in Spanish to each other. Where are the sombrero people? The young people here wear baseball caps or nothing.

It doesn’t seem like I’m from here, but I think it is my pueblo.  “It is my pueblo,” I say.  And I was born here, that’s where my umbilical cord is. When I lived on the other side, I wanted to go home. Now that I’m here, it is not where I grew up.

Sometimes I think that I’m like a bird, always flying.

The other day I asked my father how old I was when I went to live in Tlacolula. “Around four,” he said. I don’t remember that time very well. I just remember bits.

When I first went to live in Tlacolula, I didn’t speak any Spanish.  I remember my brother’s godparents would laugh at me when they would ask me to bring something and I would bring them something else. Since they spoke Zapotec, too, they would tell me in Zapotec that it wasn’t what they had asked for.

I remember missing my parents. One day I ran away from those people’s house. I don’t remember how I did it, but I left to go home.

My grandmother said that on that exact day, they were walking to Tlacolula. She said that she met a man on the road at Lo Rrai on his way to San Lucas. That’s when she saw me on the back of one of his donkeys, which probably had carried firewood or coal to be sold in Tlacolula. Then the man teased her by saying, “I found this little stray, so I’m taking him home.”

My grandmother said the man told her that he had asked me who I was and where I was going. I had told him whose son I was and that I was going home. The man took pity on me as I was walking home, so he put me on the back of one his donkeys.

Now as I walk the streets where once I played tops, marbles, hide and seek, and many puat, I think – these street, they don’t know me anymore. All the places where I left my footprints and my shadow have now been covered by cement.  The places where I used to play have been buried.

He laughed, “Oh, you are the son of so-and-so. Man, I don’t recognize you anymore. When did you arrive?”

That reminded me of when I had first come back from living in Oaxaca City, Spanish came out of my mouth, I asked a kid named Pedro where he had gone and he cussed at me and said that I wasn’t from San Lucas, that I was a city person. He picked up a stone and threw it at me and ran home!

Now I’m almost home. I feel the cold water splashing my feet. My huaraches become slippery in the water. My head starts to get a little wet, the water is soaking through my hat. It’s a good thing my house isn’t far from my dad’s. I walk faster to get there quicker.

I arrive at the entrance to my house and see some bulls through the gate.  I don’t have bulls.  I put the key in the lock and push open the gate. I raise my hands and yell to chase the neighbor’s bulls out of my property.

Awarded the 2017 Premios CaSa for the creation of Zapotec literature

Dr. Felipe H. Lopez is originally from the Zapotec town of San Lucas Quiaviní, Oaxaca. He currently serves as advisor to the Oaxacan State Commission on Human Rights. At the age of 16 he migrated to Los Angeles, California, speaking no English and little Spanish. By 2007 he had earned his Ph.D. from UCLA in urban planning. It was at UCLA that he began working with linguists to document his language, resulting in a trilingual Zapotec-Spanish-English dictionary (Munro & Lopez et al. 1999). His Zapotec poetry has also been published in the Latin American Literary Review and The Acentos Review. The short story featured in LALT, "Liaza chaa / I am going home," was awarded first place in the narrative category in the 2017 Premios CaSa competition for the creation of literature in Zapotec. The Spanish translations are his own. He is presently working on a book of Zapotec language poetry. More of his writing can be found at http://felipehlopez.weebly.com/.

It’s hard to remember, but at the end of the eighties, those of us who were starting to feel our way into poetry in Chile were faced with a confusing…