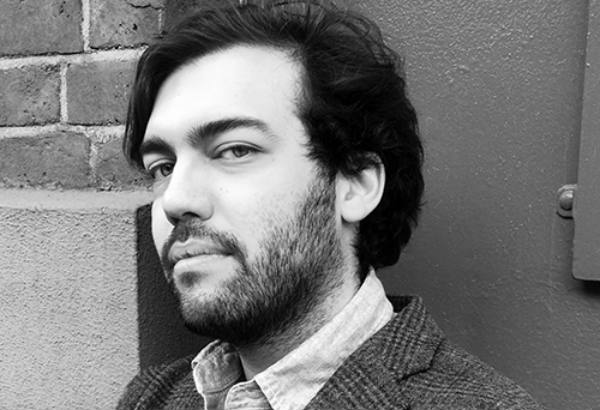 Where else was he going to be? Certainly
not up there, getting hungry amid so much silence,
so many saints in ecstasy, so much celestial sphere
obsessed with measuring the centuries
nor down here, domesticating that
solitude that belongs so much to no one,
feeding it syllables
and shipwreck.
No, Don Luis has to be
down there in hell,
of course, in lower-case letters,
in a grotto as thick as his throat,
condemned to never repeat
a single word, to irreparably
waste what is said,
to witness that secret luxury
that is the voice when it surrenders
and becomes pure drifting ash.

Before the alarm clock goes off, the honorable
minister’s eyes are already open: he gets up
to the jagged sound of the forge he hides
under his ribs. He brushes his teeth, he
shaves. Sitting on the toilet, pants
around his ankles, hands wringing and
forehead hung in prayer, he asks all
the saints to help him out, to free him
from the cramps that weigh on his intestines, black as
sin. He showers, gets dressed and perfumed: a
coffee awaits him in the kitchen. He eats breakfast
with omeprazole, sitting up straight, his head
held up thanks to his tie; if not for
that knot, it would roll who knows where. The
last time was a catastrophe: they found
his head drunk and disheveled outside
a brothel—it was in all the papers. He goes
to the office with chauffeur and security, distracted
by the spots that grow ever more
numerous on his hands. First rivotril of the
day. The office greets him jammed with papers,
commercial treaties, bilateral traffic,
bonds sold and bought, actions, properties,
red corpuscles, leukocytes, platelets, bilirubin,
serotonin, look how high his sugar
and cholesterol are. An exchange control
must be urgently implemented. Blood is always wasted.
Ibuprofen for the headache, along with the
settlement acts of free trade,
transatlantic and hematologic. We must cover
the raw earth with whatever we can, whatever
we have at hand. Order and progress, or
something like that. Second rivotril of the day. And
God gives him a task: to name the creatures
that move along the ground, the birds with neither memory nor
ambitions, the fish that will never
earn a shadow. The honorable minister obeyed.
He set about inventing names in a grainy
voice, and soon, it was time
for banking packages, real estate
bubbles, inflation with his false
teeth and lead in his eyes. He had witnessed
a Eucharistic miracle: the flesh was tin and the
wine was oil. It wasn’t easy, not at all. Third rivotril
of the day: the austere miracle of the multiplication of the
fishes and the clonazepam, just like when the man
from Galilee invented bank interests.
And diclofenac for my back, please. When
he gets to the bar, the whiskey of the end times,
he’s sure his tension has gone up, but he has
no more losartan—a tragedy for the national
economy. It’s impossible to predict what will become of the
gross domestic product if it doesn’t calm down, but the music
torments him, he hasn’t eaten and the aluminum of a stranger’s
smile makes him nervous. That night he lands at the house
of his lover, prepared to approve the exploitation of
all the natural resources the nation’s development
demands. The fate of his country hangs from his cardiovascular, incandescent
trembling. After fucking,
he locks himself in the bathroom and urinates, humming “Imagine.” It’s been
playing in his head all day.

Juan Ramón Jiménez provokes contrasting reactions, brings about opposing symptoms, and seldom arrives at a consensus of tastes and preferences.