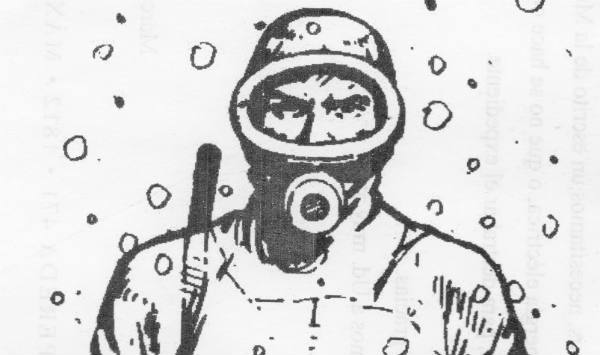 Hey, how do you say “comics” in Spanish, you know, like Batman?

Cómics, monos, monitos, tebeos, historietas, cuadrinhos, animados, muñequitos, cartones, chistes…… I can’t even remember the pile of answers I’ve received for this question. Why are there so many words in Spanish to describe a story that develops through words and drawings? It’s possibly the linguistic complexity of the Spanish language, the cultural diversity of the region, the lack of a definition of the medium, or simply, the long tradition of graphic narrative in Latin America. The graphic narrative is still generally associated with American or Japanese culture. When we talk about “comics”, we think about Marvel and DC’s superhero stories or the incomprehensible manga titles. Yet, the narrative-graphic tradition in Latin America begins much earlier than the mention of the term “comic” in the United States. I’m not talking about the Mayan codices, although several scholars would agree with the fact that these codices, already in the classical period of the Mayan culture had the elements of sequence, direction, perspective, organization and movement that is present in modern graphic narrative – I mean the roots of the contemporary medium. In the early nineteenth century in Mexico, the cigarette company El Buen Tono published several illustrated brochures and a magazine with the character of Ranilla. Cirilio Villaverde draws the first board in Cuba in 1848. In 1869 in Brazil, Angelo Agostini begins publishing ” As Aventuras de Nhô Quim ou Impressões de Uma Viagem à Corte”, one of the oldest comic strips in the world with regular serial publication. In his honor, the Angelo Agostini Award is still given in Brazil. “As Aventuras” was a parody of the customs of the time, building upon the character of a caipira peasant in Rio de Janeiro. It was a reflection on the clash between rural and urban culture, a motif that appears in comics to this day. José Guadalupe Posada (1852 – 1913) draws one-page boards that were sold on the streets to the illiterate and semi-literate readers. He popularizes the catrina, the skeletons and other prehispanic elements, always present within folkloric scenes of the Mexican peasant life. Something similar happens with the Argentine gaucho. These are the stories of rural people who were becoming part of the urbanized city life in the early metropolitan centers.

These little drawing, apparently innocent, almost always carry a political implication. The period between the middle of the 19th century and the beginning of the 20th is full of newspapers devoted to political satire. Some of the Mexican papers are El Toro (1826-32), El Ahuizote (1874-75) and La Orquesta (1861-74), among others. Several prolific artists, such as the muralist José Clemente Orozco, took on the task of drawing mockeries. In Colombia, Alfredo Greñas established El Zancudo to help the opposition against the regime of Rafael Núñez. The newspaper published provocative caricatures of political figures, until its shut down by the government in1891 and the imprisonment of Greñas. At the beginning of the century, other publications flourished such as El Gráfico (1910-41), Bogotá Cómico (1917-25) and Fantoches (1926-30). In 1912 in Argentina Caras y Caretas begins circulation and the publication of the first comic strip in the country, drawn by Manuel Redondo. Already at the beginning of the 20th century, several newspapers dedicate exclusively to the publication of comic strips – El Tony in Argentina, Vida Fluminense in Brazil; El Heraldo sponsors the publication of “Don Lupito” by Andrés Audiffred, considered the first comic strip in Mexico.

The compilation of these strips in the 1930-40 marks the beginning of comic books and the era of the big publishers. Adolfo Aizen, the so-called father of Brazilian comics, established the Ebal publishing house in 1945, one of the most important comic publishers for nearly half a century. In Argentina, Hector Germán Oesterheld established Editorial Frontera in the 1950s and developed a style that focuses on collective heroes as characters. Together with Alberto Breccia, he published the iconic El Eternauta and Mort Cinder. Mexico experienced the “golden ages” of comic books between 1930-1950. Comics such as Pepín, which was published eight times a week (twice a day on Sundays), gained such popularity that the comics got the name pepines (one more term on the list). Filled with “typical” characters, these comic books gained an important role in the foundation of a national-popular mass. The famous characters Inodoro Pereyra by Fontanarrosa and Mafalda by Quino appear in the 70s in Argentina. At the same time, Maurício de Sousa and Ziraldo Alves Pinto in Brazil develop a huge entertainment industry, aimed at the popular mass. In Mexico, the generation of Eduardo del Río – Ríus, moves away from the melodramatic style of the popular comic and takes refuge in the political caricature. His contemporaries and disciples – Abel Quezada, Rogelio Naranjo, Helioflores, Jis (José Solorzano) and Trino, become the most recognized cartoonists in the country. The influence of Ríus was so great that Carlos Monsiváis kept joking that there were three departments of education in Mexico: The Secretariat of Public Education, Televisa and Ríus. John A. Lent comments that in the 1980s, 250 million comics were read monthly, consuming more than sixty percent of the paper used in Mexico.

The twentieth century is characterized by a complicated relationship between the state and graphic storytellers. The state used the popularity of comics to promote a national identity and educate the popular masses. In most Latin American countries, there were comic books on national history, didactic-moral comics, juvenile comics and illustrated versions of literary classics. On the other hand, through humor, the popular comics questioned the dominant discourse and the inequalities that were brought with modernity. Towards the end of the century, several openly political publications appeared. “The Fourth Reich” by Chilean cartoonist José Palomo began circulating in 1977, a very important comic that commented on the issues of torture, militarism and US hegemony. Ríus was kidnapped and threatened during the presidency of Díaz Ordaz, due to the publication of “Los Agachados”. Hector Oesterheld and his family disappeared during the dictatorship in Argentina and after several threats, Breccia stopped dealing with political topics. In several ways, being a comic artist became a dangerous profession, constantly suffering pressures from the corporatization of mass media, the church and the totalitarian regimes.

Now, we are in the 21st century, a very complicated time in literary terms and even more so in the world of graphic narrative. We are witnessing a process of displacement that began in the late 80’s and is still in process. The contemporary graphic narrative shifts from the popular comic, consciously playing with its structure, the medium of publication, the paratext, the themes and characters, and even the language in which it is written. The disappearance of the regimes that marked the twentieth century, globalization and access to means of self-publication, often online, have drastically changed the way of producing graphic narrative.

The first problem appears with the term “graphic novel” (more terms!), popularized in the United States with the publication of A Contract with God (1978) by Will Eisner. It is a complicated category, mainly because the term arrives late to describe works that were already being published in Europe, and some would say even in Argentina. In addition, the medium is built based on the traditional format of the comic and still adopts many of its elements. An important point of departure in the graphic novel is the conscious game with the format of the comic, pushing it to its limits and in certain cases radicalizing it. Graphic novels transform and sometimes even eliminate basic elements, like panels. Produced to be read as an entity, instead of serialized issues, graphic novels experiment with the depth of their characters, the complexity of the stories, the verbal-visual relationship and even the paratextual elements. Sold in bookstores, with a hard cover and high-quality paper, the medium brakes away from the ephemeral of the cheap comic, sold at kiosks by the subway station. Perhaps this last element has been the main reason for criticism toward the term “graphic novel” as a commercial tool by publishers to sell comic books at a higher price. Some would even say that it is only an attempt by academics to turn the medium into a legitimate subject of study. Maybe so, but the truth is that the graphic novel questions the marginalization of graphic narrative as a superficial, childish and anti-literary medium. Several scholars have rightly commented that the medium breaks the opposition between the popular-national and the elite. Also, what does the national even mean for a generation that grew up reading Ríus, Oesterheld and Frank Miller simultaneously?

The graphic novel, and in general, the contemporary graphic narrative, problematizes the relations between the local / global, popular / elite, material / virtual, ancient / futuristic … Cyborgs, christian angels and mythical alebrijes appear side by side in Edgar Clement’s novels. Marcelo D’Salete tells about slavery in colonial Brazil, Paco Ignacio Taibo II about the Mexican Revolution, Jorge Claudio Morhain about a futuristic world. The Brazilian twins Gabriel Bá and Fábio Moon publish in English in the United States, while the French Peggy Adam discusses femicides in Ciudad Juárez. Others are dedicated to intimate stories that can be read in Quito, Los Angeles or Tokyo. The Colombian Power Paola writes about adolescence, immigration and love. The characters of Bernardo Fernández – Bef vary from robots with existential crisis, to Frankenstein and a family confronted with autism. It is an extremely complicated, but fun litrary world, which reflects and responds to an environment that is constantly transformed by the norms of neoliberalism and globalization, both socially and individually. This dossier is a modest attempt to start a discussion that has been needed for quite some time. Let’s get to it…

An Excerpt from Stag’s House