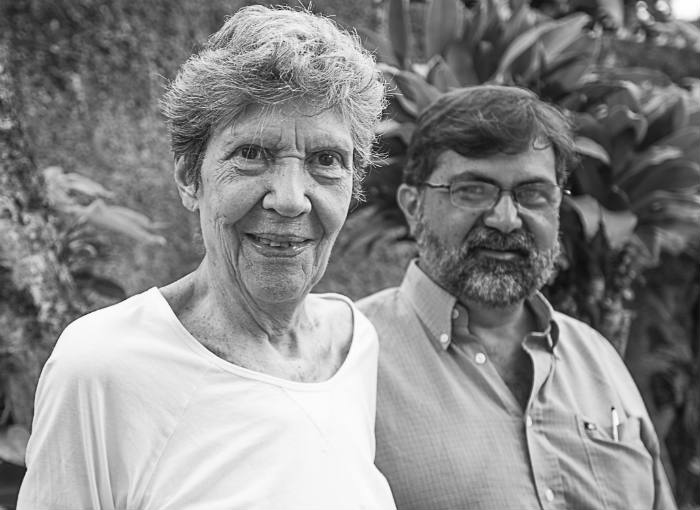 Arturo Gutiérrez Plaza: Today we have the privilege of speaking with Victoria de Stefano, who’ll tell us about her work and the experience of creative writing, both fiction and essay. Victoria sent us a few texts that could serve as a starting point for this conversation: an excerpt from her novel Lluvia [Rain] and an essay from the book La refiguración del viaje [The refiguration of the journey] called “Su vida” [Her life], which is obviously an autobiographical essay. Perhaps we could start our conversation with those two texts. Victoria, thank you so much for accepting our invitation.

Victoria de Stefano: Thanks to all of you for coming to listen to me.

VS: Well, perhaps based on the reading of these texts and your comments you all could ask some questions.

AGP: Curiously, I think we all agreed on identifying Vargas Llosa when you were talking and thinking about the novelist who can really plan out a novel, I think there’s general agreement about that. But I’m interested to hear you mention Proust. Before this conversation, I was thinking, “What could Victoria’s novels look like?” A digression from digression to digression to digression; the writer who thinks about art, about the artistic, cultural, literary reference; it’s expansive and static all at once, no? It can be so morose that it fascinates you or it can bore you terribly, depending on the type of reader as well. Your novel easily demands a type of reader attracted to books that are not bestsellers, no? For that reason, I’m interested to hear you mention Proust, because I see something else there. Proust has absolutely no qualms, obviously, in appealing to biographical date. His novel is constructed from “his life.”

VS: From his experience.

AGP: From his own experience, no? And the same thing is notable and interesting in your case. For example, in your essay “Su vida,” it becomes obvious…

VS: That’s what I was talking about, when we traveled by boat, when we came to New York.

AGP: Exactly, but in the novel, the text you sent, the chapter that corresponds to the fourth of July—and this is really a novel, not a book of essays—you start by saying “my father was born in 1905,” and this is evidently the same father as the father of the narrator of “Su vida.”

AGP: Today, we could say that it’s common that, in the contemporary novel, the issue of autobiography has assumed a greater status, a greater presence, but perhaps there was a certain aversion to it in “Boom” literature, no? A bias against the biographical. What do you think about that? You’ve spoken of memory, that memory that acts through layers, through story after story after story as they accumulate. But what can you tell us about this narrative subject, which has no qualms about letting the reader see that it is openly in dialogue with the author herself? What do you think of that?

VS: Two things. When I finished La noche [The night], I was waiting for them to edit it, because it’s hard to start another project before they edit your book. Then I wrote the Diarios 1988-1989. A much longer diary, but one from which I selected ninety-five pages. So, for me, the work of this diary was the work of showing myself to myself, of opening up (there we have psychoanalysis and the therapist’s couch), but also my need to take on (although La noche includes a lot of personal experience), to take on a more intimate and personal way of writing, with fewer models (although literary models are always there). That is, with fewer imposed models, such that the choice of literary models is a choice of fondness, of feeling, of affinity. So, this diary played a very important role in my passage to what you call… they are biographical, not confessional. I think. So much so that when I wrote La refiguración del viaje as a biographical outline, I called it “Su vida” and wrote it in the third person. Writing in the first person is very strong. If someone writes in first person, based solely on their experience, it can become somewhat banal. The first person is useful to create a first-person character, but that’s not easy. Consider that all the “Boom” novels you mentioned are narrative novels. Even from the point of view of the model of the novel employed by the German romantics and later Benjamin, the novel is the novel of subjectivity. The novel is where we see inner beings. And these novels, which we think of as coming from the “Boom,” barring a few exceptions, are all written as descriptions of a universe, which is our social, geographic, political universe, that we must absorb. That is, they fulfill another function. They fulfilled this function as did other previous generations, like Ciro Alegría, or Arguedas, or perhaps Rómulo Gallegos, or Pocaterrra, no? And if, like some people, you have the words, “I want success,” “victory,” “success,” written on your forehead, haha! Since that’s almost impossible in our part of the world, it becomes just another torture. And the writer can’t torture himself too much, because life itself involves enough torture already.

AGP: Another thing that interests me is the subject of menace… That is, the confrontation between the space of intimacy, which is the writer’s place (and it’s strange that a novel should be called “the place of the writer,” which sounds like a book of essays).

AGP: I think that’s where you synthesize, in some way, your literary project. That is, as a narrator you’re thinking from the writer’s place, and making a novel, from the writer’s place, that constantly reinforces the space of that writer who is reflecting on how to create stories. But that presupposes a space of intimacy where the characters you create act in defense of that space, right? And that space is menaced by the various forms in which nature expresses itself. These forms could be the rain, they could be what, in your latest novel (Paleografías), could be read as the landslide (of the tragedy of Vargas). So characters appear who remain isolated from inclemency, like those of La montaña mágica [The magic mountain], or the boat itself when you describe that journey in which you talk about the shipwreck and the menace of the sea, and the terrible sensation of facing down the avatars of the environment, no? In this case, it’s the ocean.

VS: Those were all stories my father told.

VS: Yes, of course. One way or another, seclusion is a privileged literary space. Seclusion as a space of encounter, as a dramatic space. And having created that space, in Paliografía, in the end, in which no one can get out, everyone’s locked up in that inn-hotel, I allow myself a novelesque outing, I allow myself something like the night in The Decameron, the nighttime meetings where everyone speaks. The social differences have disappeared to some extent, so everybody’s there, the hotel workers, the maid, the cook, all together. Each one, in these circumstances, suggests things that are important or that bear spiritual weight: the relationship with the divine and the subject of love, the subject of happiness, which also appears in the novel Cabo de vida [Tail end of life], which is, as I said, a little-read novel. It was published by Planeta, then the crisis came, and well, it disappeared. Even I only have three copies. Think of all the things Bakhtin said about chronotopes, which are—whether the entrance to the stairway, the hallway (or the “bargueño,” as the Spanish translators say, which I never understand, it must be some sort of porch?)—where the great conflicts are produced. But I also had that in mind, because it’s obvious that the novel, from its beginnings until today, has had its little tricks. Just like theatre, with the misplaced letter or the poisoned cup that’s passed to the wrong person. I like these literary resources, these novelesque resources, I like to use them, they give me a certain freedom, they place me in the world of fiction. And, to be sincere, when I hear the word “fiction,” I get a little… because, for me, it’s reality.

Arturo Gutiérrez Plaza (Caracas, 1962) is a poet, essayist, and university professor. He has published books of poetry, essays, and literary research, and has received several awards and contributed to numerous international journals. He is Associate Editor, correspondents’ coordinator, and co-founder of Latin American Literature Today. His writing has been featured in anthologies published around the world and has been translated into various languages. He is currently a Distinguished Visiting Professor at the University of Oklahoma.

Strange Things that Happened to Ribeyro

These lines have no other purpose but to offer a few personal glimpses of Julio Ramón Ribeyro. Naturally, my perspective results from my binary condition as a friend of his…