Marieta was the daughter of the laborers on our hacienda in Machachi. She was little, always with her hair pulled back in a French braid. Her skin was the color of the café con leche that my dad gave us to drink when we were little. She was the last of six kids. Her parents had worked for my grandparents, and her grandparents for my great-grandparents. Always they had lived in a little house made of leftover cement from when they built the cow pen. Their house was towards the back of the hacienda, next to the animal pens. I never saw the inside of it even though Marieta invited me in a bunch of times. My parents forbade me, and hers didn’t seem to like the idea either.

Still, we became inseparable. When I was just three years old, and she was five, we played together every weekend and every holiday at the hacienda. We played at kitchen with clay pots; we raced each other; we played hide-and-seek, but only in the front gardens so we wouldn’t get lost; we searched for little white stones together, which was difficult since the rocks in the hacienda were gray; we raced the dogs, and as we grew older we also rode the horses and milked the cows.

My mother didn’t like me to play with her so much, so for a time she always made me invite some friend from school, but either we ended up playing together the three of us, or we would leave my school friend behind. I remember once I brought a Cabbage Patch doll hidden in the car to lend to Marieta so we could play with good dolls instead of with her rag dolls or my grandmother’s old doll collection. When my mother saw Marieta with the Cabbage Patch doll she took it away at once and went to talk to her mom. I don’t know what she said, but that weekend Marieta wouldn’t come near our house. It’s an old house, in the colonial style, full of arches and doors with panes of glass and old wood. I missed her, and I cried, yelling at my mom that I had given Marieta that doll and that I liked to play with her. My mother tried to distract me, saying that we could go walking through the neighboring fields, maybe even up to the first hiking shelter on Cotopaxi, but I didn’t want to go out. When I yelled that she was horrible and that she would never keep us from being friends, she decided we should go back to Quito early. We didn’t go back for two weekends. Eventually my dad convinced her that it wasn’t such a big deal, what could it matter if I was friends with Marieta? After that, my mom didn’t bother me again about it.

I always arrived on Friday afternoon, and Marieta was always waiting for me. She opened the gate for us to drive in. She was strong, because the gate was made of a heavy metal. I jumped out of the car as soon as I could and grabbed hold of her warm hand to go play. When we got tired of playing in the gardens, in the farm, by the cows, we would lie down in the grass together. Sometimes I brought her out a cup of café con leche without telling my parents.

Some weekends the hacienda would fill up with guests. Many brought their kids, some around my age. While my parents and their friends danced and drank, the kids did whatever we wanted, no one paid attention to us. Then it didn’t seem to matter to them if I went to Marieta’s house or who I played with. Marieta’s father got drunk too. He drank a white liquor straight from the bottle that she said smelled horrible. On those days we spent hours in the corrals, because the music from the house didn’t reach there. The cows slept like dogs, Marieta said: “They look like dogs when they sleep.” They lay down with their legs folded under them and drooled. I remember clearly one night that a cow laid down belly up instead. Her giant stomach slumped to the sides. Her mouth twisted, her ears falling back. We laughed at her and drank café con leche in our spot in the hay. After a while we fell asleep. When Marieta’s mom came out to get her it was really late. She was shaking, I don’t know if it was the cold or the fright. She hoisted Marieta on her back and told me to please go into the house quietly, please don’t say anything to anyone. So I did. My dad was asleep in the armchair that my great-grandmother had brought over from France; his shirt was wet and stained with wine. Drops had fallen on the chair, too. My mother was shut in her room, and my parents’ friends, I guess, in their rooms.

When I turned fourteen, everything changed. Marieta didn’t wait for me at the gate or open it for us anymore. I looked for her—I always looked for her—but whenever I saw her she was working. She milked the cows and gave them their shots, she took care of the calves, she saddled the horses and hauled sacks of grain. I told my mother that they shouldn’t make her carry around such heavy things, that she was only sixteen, but my mom just answered that it was her parents’ decision.

Without Marieta, I spent more time riding my mare when I went to the hacienda. The truth is, I was pretty good. I would ride all the way over to Cotopaxi. In those rides I started to understand what it meant that my family owned all of that land, including the mountain. But not even the owners of a mountain can prevent their descendants from witnessing how life unravels. Life doesn’t care who owns what or whom. Life doesn’t care about time passing, or anything. Life just is.

One night I stayed out watching Cotopaxi until late. When I returned I felt like seeing Marieta, and I brought my mare over to the cowpens, close to her house. I heard loud grunts; not from a cow, although they sounded like some kind of animal. They turned into cries, screams. I left the mare outside and walked into the cow pen. I saw some cows lying down. None of them were belly-up. Some were awake; maybe the screams didn’t let them sleep. Behind them was Marieta. The screams were hers. She was squatting down with no underwear on, and her hair was wet. It was the first time I had ever seen it loose. Her mother held her up from behind.

I came closer until I could see her face. She looked spaced out, sweating and rocking in a funny way. I stayed there, frozen, until her mother saw me. I was sure she was about to tell me to go away, but at that moment, instead, she just told Marieta to push. “It’s time to push, mijita!” she yelled. Marieta, crying, said she didn’t know how to push. “Pretend you’re taking a shit, mijita,” her mother told her, and in that moment the baby’s head appeared. I saw it, the head moving from one side to the other, and when her mother told her again to push, the shoulders came out, and the baby slid out, all slimy, and fell onto a sheet below. Marieta grabbed it, bloody, and held it to her chest. Her mother petted it and said “mi guagua… my beautiful baby.” Then Marieta saw me, and I understood in her look that I should go and not come back.

From then on I concentrated only on riding when I went to the hacienda. I never found out where they sent her and her baby. I don’t know who got her pregnant, or if my parents knew about the birth. We kept going to the hacienda like always. In fact, now my parents spend more time there than in their house in Quito.

I came to Germany to study, and I got married here. My husband has never been to the hacienda. I never thought about Marieta’s labor again until my own.

So planned, so proper: hygienic.

Julia Rendón Abrahamson is the author of the novel Lengua Ajena (De Conatus, 2022) and the short story collections Yeguas y Terneros (La Caída Editorial, 2021) and La casa está muy grande (Linda y Fatal Ediciones Argentina, 2015). She is a 2021 winner of the Montserrat Roig Prize for Literary Creation from the Cultural Institute of Barcelona. Rendón Abrahamson is considered part of the recent “boom” of Ecuadorian women writers reaching the international literary market. She has degrees from Boston College, Parsons School of Design, the National University of the Arts, Argentina, and the Argentine institute House of Letters. 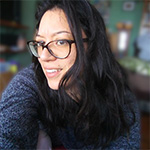 Madeleine Arenivar is a literary translator and editor. She specializes in academic and, more recently, literary prose from Spanish. Social science manuscripts on which she has worked have been published by the University of Chicago Press, Oxford University Press, Routledge, and the American Journal of Sociology, to name a few. Madeleine has degrees from Vassar College and the Latin American Faculty of Social Sciences (FLACSO) Ecuador.

Lucas García París: “Outside of narrative, you don’t exist": A Conversation with Claudia Cavallín

Lucas García París works with the real through his ties to a referential framework of pop and pop culture that transgresses the limits between fiction and everyday life.  Beyond academia,…

Elena Poniatowska: the History of a Love Affair

My love affair with Elena Poniatowska began in 1986. I was a graduate student at Middlebury College’s Summer Spanish School.

The rains touch the strings / of his air / and, above, he is the chorus that utters / the sound of fertility / There were many animals, he is…