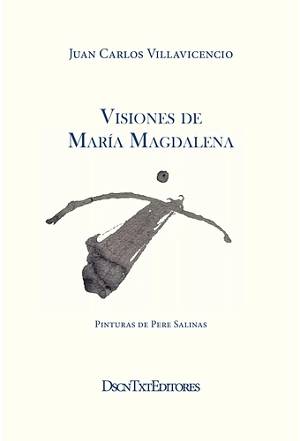 In his illuminating foreword, Carlos Almonte discusses uneasiness towards spiritual gestures as a symptom of today’s reader. This uneasiness presents itself not only as ignorance of religious history and its symbolic codes, a sign of our secular age, but also in the very act of interpretation. Today’s reader averts their eyes in the material presence of the sacred, be it ripples in the water, striations in the rocks, or the shoreline. This reader is in constant search of discursive manifestations: of what is said and not the act of saying. In Visiones de María Magdalena, Juan Carlos Villavicencio not only works with the spiritual gesture, but also creates a dialogue between the mediums of words, music, and images. From this hushed conversation, the Chilean author conceives of writing as a synesthetic experience; that is, the poem is a forcefield beyond but also behind language.
This spiritual gesture rests on the figure of Mary Magdalene as a literary source throughout the seven chapters, named “Golgotha,” “Eli, Eli, Lama Sabaktani (Dos visiones de una traición ignorada),” and “Kyrie Eleison,” among others. In the titles of these works, the linguistic intersection between Spanish, Hebrew, Greek, and Latin favors openness, translation, and the meeting of different artistic forms, tongues, and historical times revolving around the passion of the Christ. In this poetry collection, the Chilean author neither imitates nor reproduces the biblical tale, but rather advances, molds, and transforms the symbolic substrate with verbal economy, medial negotiation, and expressive subtlety. These rhetorical tools, previously broached in Oscuros rios (2018) with the temporal paradox of the Heraclitan allegory and expanded upon in Antígona en el Espejo (2021) with the radical reversion of the Greek tragedy, make up Villavicencio’s poetics. In other words, we are face to face with truly experimental gestures that form part of the modernist European and North American tradition. These gestures are woven into the Imagist collage of T.S. Eliot (whom Villavencia has translated), and the classic rewritings of Rainer Maria Rilke, a cited poet in Visiones de Maria Magdalena, as well as contemporary literary radicals such as W.G. Sebald and Anne Carson.

At the linguistic level, the Chilean author imagines poetic vision as a verbal manifestation that precedes speech as an instrument of communication. Throughout the collection, the lyrical subject matter is concentrated in the articulation of reading and the gesticulation of language as significant acts of speech because of their negative, material, and affective character. In poem IV from the chapter “Eli, Eli, Lama Sabaktani,” the speaker declares, “However as of now/ nothing exists/ even these words/ are but mere impossible artifices./ The winter of betrayal or cowardice has constructed/ this voice’s every lyrical musing.” Instead of a message or word, the act of reading gets caught up in the material metaphor and lyrical synesthesia of the phoneme, as well as the absence, lack of definition, and impossibility of language as closure, so clearly embodied in the crucial phrase: “but mere impossible artifices.” This poetic attention towards articulation rests not only on diction, which comes from the precise usage, metric variation, and repetition of textual echoes, but also on the metaphorical power of the image. In poem V from the same chapter, the speaker returns to the figure of a fallen leaf to activate the voiced, linguistic, and expressive affects of the dead body of Christ: “an extended howl resounds in the vacuum/ the bubbling of a body/ that rots in abandon.” Similarly to the previous passage, the speaker is concerned with broaching pain as an event incapable of being expressed by articulated, discursive, and arbitrary language. It is a material event that is, therefore, pure potential and gesticulation: “an extended howl” that “resounds in the vacuum.”

Throughout the collection, image and music, the visual and the acoustic senses broaden this expressive commitment. Regarding this first aspect, each section displays Pere Salinas watercolors relating to the poems’ titles and themes. Just like Villavicencio’s writing and his unassuming work, these paintings draw, hint at, and blur Christian symbolism and the biblical icons of the passion of the Christ through the function, medium, and material of the watercolor. In this sense, poem IX from the chapter “Liberación del Pecado” would seem to reflect on the visual dimension of the book as a poetic gesture, contrary to its closing discourse: “Yesterday’s befuddling light will not emerge/ until it decides to speak up.” Regarding the acoustic sense, music manifests as absence through paratextual citations listed in the section “Notas: Referencias de cada poema.” Through Villaviencio’s sustained diction, musical pieces spanning from Bruno Moderna to Gerard Grisey to Helmet Lachenmann, among others, are interwoven into the poetic texture of the book through their titles and movements; they transform and reinforce the biblical substrate. Together with the musical component, these paratextual symbols refer not only to literary citations integrated into the collection of poems, such as those of Rainer Maria Rilke and Paul Eluard, but also to those that are absent in the final publication, such as Milan Kundera and Hans Christian Anderson. The previously quoted poem IX imagines this silent music as “a chorus of othered visions” that “keeps company with ever-fleeting piety.”

In this collection, Juan Carlos Villavicencio relies on the linguistic, visual, and acoustic gesture to outline a poetics attentive to the strength, autonomy, and vitality of language. The ethical commitment of reading and writing in Visiones de Maria Magdalena gets channeled through the poem’s willingness to explore multiple directions; that is, its rhetorical discourse revolving around Christianity, literary citations, watercolor images, and musical composition. From this interplay, the Chilean author uses not only the biblical imagination, but also a constant meta-poetical reflection about its expressive mediums. This new publication thus returns to the mystical and romantic notion of the poem as a vision, or perhaps a vision of visions.