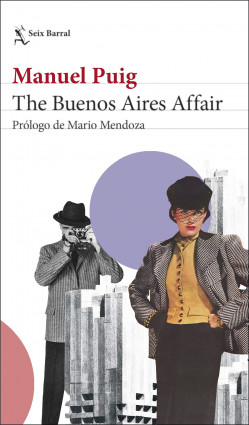 Seix Barral has begun recovering the work of one of the late twentieth century’s most original authors. Manuel Puig (General Villegas, 1932–Cuernavaca, 1990), is the creator of a body of work in which film, his own experience, and a taste for popular language combine into a singular case of the Spanish-language novel in Latin America. Betrayed by Rita Hayworth, Heartbreak Tango, and Kiss of the Spider Woman are good examples of the narrative form so characteristic of this Argentine author.

With The Buenos Aires Affair, Puig abandoned the vital space of Coronel Vallejos—a clear substitute for General Villegas—where he had set his previous novels. This time, Buenos Aires serves as an urban space in which to weave a detective story that unfolds between the 1930s and the end of the 60s. As Colombian writer Mario Mendoza points out in his insightful prologue, the novel narrates “the last two days in the life of Leo Druscovich and the enigma of a series of disappearances, false trails, and sexual obsessions.”

The novel is a well-aimed critique of those totalitarian regimes in which “violence upon individual bodies and the social body, official lies, and family secrets intertwine in a plot of seduction, psychoanalysis, and fascism,” according to the words on the book’s back cover, drawn from that “letter to a stranger” Roberto Calasso mentioned in his essay Cento Lettere a uno Sconosciuto, which Manguel Puig used to create a plot that will make us participants in solving a crime.

In 1971 Manuel Puig signed a contract to publish the novel with Seix Barral under the title Noche en el Ritz. In the end, due to problems related to censorship, the text never saw the light of day. Nevertheless, two years later Editorial Sudamericana published the novel, changing the title to The Buenos Aires Affair. The book was not exempt from difficulties: it was confiscated and censured, a fundamental cause of the Argentine writer’s exile to Mexico.

From a young age, Puig tried to escape the oppressive reality of his birthplace, which led him to create his own reality where musical comedies, the sophisticated comedies of the metropole, “were reality for me. The town was a western that I had entered into, a movie I had gone to see by mistake but could not escape from.” A cinematic quality is present in all his novels; it could be said that his narrative technique cannot be explained without film. This longing for the seventh art took him to Italy, where he worked as an assistant to Vittorio de Sica and Stanley Donen, but this experience disappointed him: “I had lost what had sustained me until then: a calling for cinema. This turned out to be a misunderstanding. Because, deep inside, what I was really trying to do was prolong my ‘role’ as spectator.”

He began to write film scripts, but they had little impact. And so, he turned to the novel. That’s when he realized literature was closer to what he sought. In that vocation he found a path to explaining his own lived experience. His friend Néstor Almendros introduced him to Juan Goytisolo, who encouraged him to compete for the Premio Biblioteca Breve, which saw him place as a finalist with his first novel.

The Buenos Aires Affair, like Manuel Puig’s other novels, converges on an obsessive and constant set of themes, in which the films of Hollywood’s golden age play a starring role. At the start of the work, we witness the following dialog, taken from the George Cukor film Camille:

Greta Garbo: (feverish, trying to hide her fatigue) If that were true, you’d be the only one against it. Why are you such a child? You should go back to the living room and dance with some of those pretty young girls. Come on, I’ll go with you. (She holds out her hand.)

The handsome young man: Your hand is burning up.

Greta Garbo: (ironically) Why don’t you let a tear drop onto it to cool it down?

I think these minor genres can be treated with a certain artistic rigor and appreciated. The fact that they are popular doesn’t bother me, quite the contrary. There are certain ingredients, for example, the serial story, a care for intrigue, that seem valid to me. I’ve always attempted a kind of popular novel.