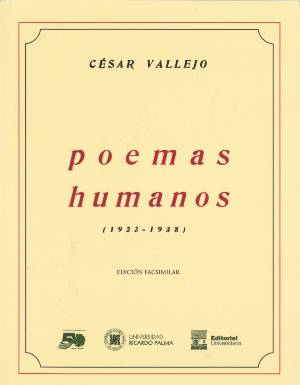 When César Vallejo died in April 1938, he left behind the unedited poetry he had written since 1923. Vallejo’s widow inherited the works, but other than those posthumously published in 1938 as Spain, Take This Cup from Me, they were in no particular order and they lacked a unifying title. The poems were also varied in terms of form, theme, tone, and date of authorship. Therefore, we can only hypothesize about Vallejo’s editorial intent with these unedited works. The poems not pertaining to Spain, Take This Cup from Me had corrections, but Vallejo had not given them the editorial attention his other works received. Thus, editing this last stretch of Vallejo’s production is challenging, and each attempt becomes a specific reading that is then supported or questioned by critics of his work. César Ferreira, who is responsible for this facsimile edition, knows this all too well.

Returning to the origins of Vallejo’s poems is always a necessary process. Around 1939, Georgette de Vallejo organized and assigned a title to this volume. Given the author’s complicated penmanship, she also rewrote the poems to create clean copies, which is undeniably a great contribution to these works. Ricardo Silva-Santisteban asserts as much in his 1997 edition based on the original manuscripts. Nonetheless, Vallejo’s editors—Georgette de Vallejo and Raúl Porras Barrenechea—acknowledge the arbitrary order of the work, which they do not hide in the least; Porras’s epilogue discusses how they imposed titles on the works and dated them even though they were not dated. Some editors believe that the most coherent way to sequence Vallejo’s texts is chronologically, which Juan Larrea begins to do in his 1978 edition. Other editors omit the word “human” from the title and separate Spain, Take This Cup from Me as a distinct collection of poetry.

Why, then, re-edit the 1939 version? Ferreira argues that re-editing is appropriate because it has been read for three decades and has served as the primary version on which scholars based their initial criticism of the works. This argument is used to defend the posthumous edition of Francisco de Quevedo’s poetry (1648), which was also organized according to the editor’s criterion, since the poet himself never established his texts’ dispositio. While Poemas humanos (1923-1938) [Human poems (1923-1938)] bears similarities to this case, it is more complex. Georgette’s version of Vallejo’s poetry, with its topics that continue to circulate in contemporary criticism, draws interest because it offers a certain image of his work: the image of his humanity.

This image is first constructed in the title, but it continues down to the book’s epilogues. Luis Alberto Sánchez identifies “incomparable sensitivity” and vitality as important values in Vallejo’s poetics. In contrast to “literary” poetry, which is born of a fixed eloquence and only capable of sentimentalism, Sánchez defines Vallejo’s language as “dis-style,” “a-oratory.” In other words, Vallejo’s style is a pure expression of human feeling rooted in his personal experiences and connected to his indigenous heritage. Sánchez believes these aspects are unifying themes in his work. Jean Cassou’s epilogue presents the work as having a personal, American accent, “free of Spanish traditions and European styles.” Cassou asserts that his work is an artistic solution to the conflict between Vallejo’s indigenous sensibility and the Spanish language. Porras Barrenechea’s “Bio-bibliographical Note” lingers on the “warm sweetness of the Andean home” that formed Vallejo’s perspective. In sum, Vallejo’s humanity lies in the characteristic and spontaneous affectivity of his language, which comes from his experiences, not from imported literary styles. The clear goal of this critique is to highlight Vallejo’s authenticity at a time when Cernuda and Hernández were establishing themselves in Spain, and in Peru, new poets and critics were inquiring about the country’s national poetic tradition.

The fact that this absolute authenticity is intentionally constructed becomes obvious when Sánchez omits Vallejo’s evident Modernist filiation in The Black Heralds (1919). Nevertheless, he himself confronts the lack of human feeling in the formalisms of the avant-garde period (in “Against the Professional Secret,” 1927). Additionally, in his European essays, Vallejo reflects on the personality of the artist and concludes that a work of art expresses contents common to all mankind. But this is the case only when the artist has explored his most intimate emotions, which leads to true poetic language (Art and Revolution). Regarding this last point, Cassou correctly characterizes Vallejo’s poetry as formed with tools that are “not made for poetic use”; that is, his use of personal, everyday terms, as seen in “The Wretched”: “The day is about to come; wind / up your arm, look for yourself under / the mattress, stand once more / on your head, so as to walk straight. / The day is about to come, put on your coat” (English translation by Clayton Eshleman, 2007).

Words such as “mattress,” “stand,” and body mechanisms such as “wind up…” present the common man waking up to the unfulfilled needs of his daily life.

But the “dis-style” of these Human Poems is palpable in their renovation as compared to Vallejo’s prior works. These poems belong to a mature poet who aptly modulates the experiments of Trilce (1922) and integrates only that which stokes intense emotion. For example, Vallejo cultivates the features of expository prose, the subtleties of cohesion and thematic progressions for the first time. He favors lyricism that stems from the focused analysis of a theme, thus the poems acquire a reflexive tone and develop the universality of their everyday themes (“Good Sense”).

As Ferreira notes in his prologue, Vallejo’s motives and tones unite in these poems: family life, personal tribulations, justice, and love. These themes converge around the major theme of the drama of humankind—a person seen in all his dimensions who never stops feeling. Such topics link these poems to Spain, Take This Cup from Me, where the poet’s political engagement becomes bodily suffering and hope survives for the sake of “frenetic harmony” among humankind (“Hymn to the Volunteers of the Republic”). These texts are not mere political propaganda because, for Vallejo, art is not subject to external rules. Perhaps for that reason, Georgette published them under one title.

This is an essential facsimile edition, published with great attention to detail by César Ferreira. These Human Poems (1923-1938) are vital to understanding the art of Vallejo. Moreover, they may represent the best of his poetry. Written when his artistic consciousness was at its sharpest, they depict humanity and a singularity that are more refined than those in The Black Heralds or Trilce.

Renato Guizado Yampi has an MA in Latin American Literature and teaches Spanish Language and Literature at the University of Piura (Peru). He is a doctoral candidate in Spanish at the University of Salamanca. His current research focuses on the stylistic evolution of the Peruvian poet Javier Sologuren. His book publications include Detalle, ritmo y sintaxis en la poesía de José María Eguren (2017) and Forma y sentido en la poesía de Ricardo Silva-Santisteban (2018).