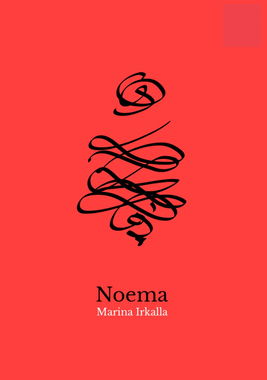 Noema is defined as “what thought is about.” But instead, the first thing that appears within this poetry collection is the disappearance of memory. The author writes, “little by little I forget the names of all the substances.” An imaginary journey is what drives Irkalla’s lyricism to overflow in a simple way. It manages to dispel boundaries—not as something problematic, but with the certainty that this must be done in order to move forward. On the one hand, it does this in spaces built in the midst of the sensibilities of sleep, in the midst of dreams and wakefulness. And on the other hand, the way forward emerges like a path that instead “smells of the desert.” This is its most exact counterpart. In that first moment, the relationship with the environment will be mirrored within an abstract time. A time that, while it is still able to “sustain itself,” ends up “swallowing infinity.”

The imaginative power will be, in essence, instinctive, alien to that other space that represents the future. The unconscious lives in that creative nature that invites us to explore the outside as it advances, even in its impossibility. One example is the poem by that name, “Exploración.” Touching the surface means freeing the unconscious creator; we’re encouraged to escape ourselves in order to explore an unusual landscape. The invitation is the excuse. And so, almost without noticing, we return to a dreamlike state. That escape is represented by a verticality that echoes like a call to consciousness: “Late / I wake up in a stupor / I bend the branches with my fists / I look down.” The call to move toward a center refers us to Juarroz’s epigraph: “Inside every abyss there will always be another one, and if there is no difference there will be distance.” Will even dreamers dream rationally? What does it mean to un-inhabit—does it mean looking down? Perhaps, to cite the author, “it sniffs out the path of danger and warns of the hidden rumble rolling down the slope.” The need for experience makes an appearance, as it is the only thing that can revive oblivion. The author writes, “Everything is forgotten in its rhythm / except for the drawings traced by the fall.” This oblivion is also suggested as the beginning of everything. There is no starting over, but rather a kind of phenomenology of imagination. And so, the seed blooms again on the inside, it imagines itself inward.

Gravity finds a foothold in creation, moving from interior to exterior images. Maneuvering becomes necessary—the synapse between the intimate and the external unfolds over the image of the body through choreography. This dance is perhaps what leads us to forgetting or un-knowing, to refraining from doing it: “I have let myself go without a parachute.” The perspective is then inverted, because the search is not what leads to any kind of success. The fall is what generates the aforementioned search, which then generates words that outline figures. Representation is still dominated by the generative imagination, but in a conscious way. What remained hidden from the outside can now be described, “But I’m not on the outside,” remarks Irkalla.

A basic dialectic is not enough. If a snake bites its own tail, this ouroboros will need to surpass its own limits. And I use the word need because the last space the author travels through is an “awakening.” An awakening on paper that builds another universe. I don’t need to confront an objective reality: “And then I understand a truth: I will not be a bird / I will not be a fish / I will never be an elephant.” I’m going to endorse the words of the poet Gérard de Nerval: “I believe the human imagination never invented anything that was not true, in this world or any other.” And so, that I that names things is awakened, reminding us in a way of Dickinson’s epigraph: “A word is dead / When it is said, / Some say. / I say it just / Begins to live / That day.” It is awakened in the most obvious way: by renaming. In these final poems, time passes quickly. It leads us toward a limit, since time and space are controlled by paper. It’s no coincidence that the last title is “Metamorfosis.” We have to abandon not onlythe ways of speaking or the ways of the body, but also the ways of existence. And it is here where, finally, the changes in space coalesce with a change in nature.