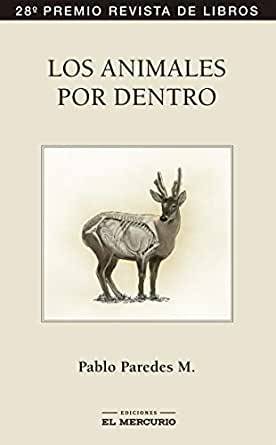 Los animales por dentro [The animals from the inside] is La raza chilena [The Chilean race] (MAGO editores, 2012) dissected, it’s an “us” from the inside; the misery of Chile in poetic-fable form. It is the Poema de Chile [Poem of Chile] deprived of the phantom woman, with a reprised mute huemul and an absent, horrendous condor when seen from nearby; so horrendous that it is not described from the inside because it was sufficiently discredited as a part of the “race.”

Paredes’s book, winner of the 28th “Premio Revista de Libros” contest from El Mercurio, concludes on its back cover with three disconcerting notes from the members of its jury: Óscar Hahn, who says of Paredes only that he is original and dissociates him from the traditions of Chilean poetry; Elvira Hernández, who visits him through an image that is closer to his center when she says, “I perceived the key that poetry has of presenting itself as something innocent and dragging us into a swamp,” and Adán Méndez, who also fails to glimpse the metaphor and only observes Paredes’s fabulesque technique.

The verse collection, divided into seven chapters preceded by an atypical “Chorus,” sings to “The foxes,” to “The dogs,” to “The bee hummingbird,” to “The cats,” to “The moths,” to “The bears,” and to “The huemul,” and is dedicated to Manuel Paredes Parod, the poet’s father.

Each of varying lengths and written entirely in free verse, but with a scalding, slow, and saddened melody, the texts of Los animales por dentro are presented as dialogues with a male or female other and alternating interior monologues.

The “Chorus” is a pre-expository text where the Mountain, the concept of home, earthquakes, choroy parrots, the desert, and the hills parade in a language-dialect that is related to Chilean ethnogeography, where the poetic voice initially seems to be the voice of any forebear of any animal species that tries to teach, show, and warn the offspring (female) about dangers and history. However, in the last verses, it gives us a key in winged form: “therefore run, daughter, you must cross the mountains / though you slice your belly / inside / and out” (16). His apocalyptic tone is evident and his drastic separation of the urban and rural worlds had already been clarified when he stated a few verses before: “you are the cars / you burst us from the inside” (16) (cars-country-politics-dismemberment, pain, neglect).

Foxes and dogs can’t coexist in Paredes’s work, the ones on top and the ones below don’t do that in this country because the homeland is cold, snowy, and the fox cub tries to disguise himself to look like the city dog; but the mother, who knows that “to lie in the cold is an act of love” (20) makes him “swear on her that he will never” again say that he is a dog (22), despite “his little dog face” (25). But dogs don’t have it easy either, for they want to be called “Cholo” and drag their unfeeling hair down the streets of the paved city, and they fool themselves into thinking the burning of the ticks is a protest against heaven and “that a bitch is a barricade” (34).

With the “Pajarito de Dios” [Little bird of God] anguish is tolerated; with a “caraj,” hunger is evaded; with a bee hummingbird, the furious reconciliation of a mestizo blood is achieved; with a “Chicano moustache,” misfortune is displayed and because “the tongue of birds is dry and smooth” (46) they yell “Amen” when they see a hummingbird falling. Anger regurgitates in Paredes’s verses and we can still read: “They believe that because we are the smallest birds in the world we’re going to get inside their mouths and sleep on their tongues” (45) with a defiant, heroic and “aperrado” (determined) tone that strongly resumes in “The cats,” declaring: “I think someday it will kill / and blessed be that the fragile / one day may kill” (53).

“The moths,” on their part, are a “tiny bug of black tempera, / it flies and stains as if carried by ants in the sky” (64). Little animals of ineffable substance, they are also a reflection of the elevated spirit of all these animals portrayed, “believing themselves as stone against glass” (64); just like the nobility of “The bears” is corrupted from within and “a bear without a heart devours the heart of a deer,” which will be “The huemul,” the only one of all the animals that is portrayed with a singular, prophetic number; the great, silent huemul that, like a phantomic Mistralian, serves as a hallucinogen and obliges us to call “huemul the morphine and its little red star” (87), and that, “tangled in the catheter’s hose” (91), closes up a volume of familiar and national pain with which Paredes dared to portray the anguish, suffering, “choreza” (vigour) and survival  of a people that lives in the household of a mother-father-sister-brother where we are, all of us who one day and one moment might identify ourselves, from within, with some of the animals of our Homeland. Because each one of those animals is a type of being (a type of woman-man-girl-boy) that inhabits the territory we call Chile.

Gabriela Ñancupil Troncoso completed an undergraduate degree in Literature at the Universidad de los Andes (Chile) and a diploma in Art History at the Universidad Adolfo Ibáñez (Chile). She is currently a Master’s candidate in Theatre Studies at King’s College (London).