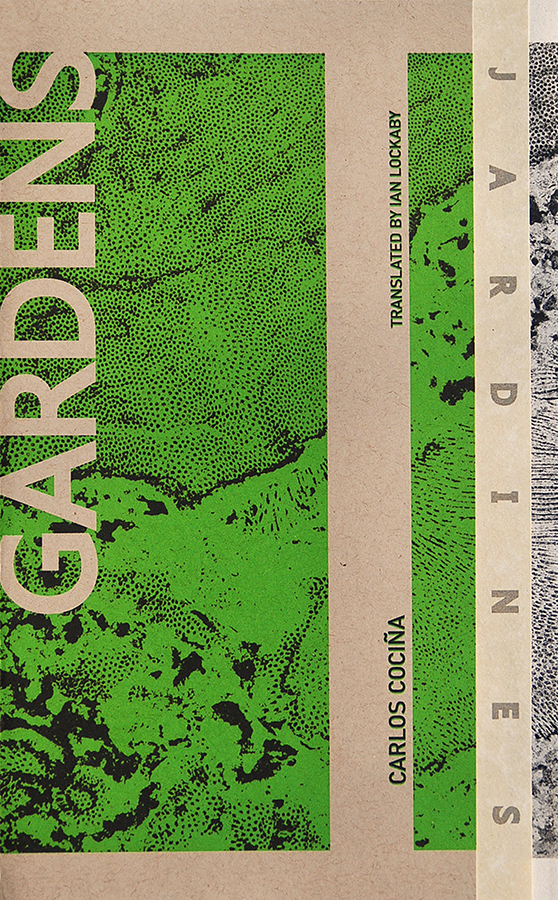 Previously published in the book El margen de la propia vida (2013), the sequence Gardens underlines, through the problem of scale and the agency of matter, a formal register, depersonalized tone, and scientific rhetoric. These attributes comprise visible signs of the literary and experimental trajectory of Carlos Cociña (1950) within the contemporary poetry scene in Latin American literature. In this reprint by Cardboard House Press (2021), masterfully translated into English by Ian Lockaby, the Chilean author avails himself of the fragmented connection of nine works of poetic prose, anchored at the syntactic level through parataxis to connect physical and psychological gardens, expansive and minuscule, visual and tonal.

Throughout this chapbook, the problem of scale frames the ever-mobile cartography of space, a matter inaugurated by the speaker’s initial rhetorical question: “¿Qué jardín es ése que se extiende en una estepa por kilómetros y que se alcanza a ver desde el satélite?” [“What garden is that which extends on a steppe for kilometers, and which can be seen from satellite?”]. Here, not only does the sequence distance itself from the religious and symbolic echoes of the garden, including its different historical and aesthetic lines—consider, for example, Eden and its medieval versions, or the neoclassical French landscape and its romantic English counterpart. It also updates the genre of topographical poetry; that is, the literary representation of a natural view from the peak of a hill or mountain—recall Gray, Wordsworth, and Keats, or Neruda himself in The Heights of Macchu Picchu. In this excerpt, the digital image can delimit and visualize the contours of the garden through a satellite’s eye, edges that stand out through their virtual amplitude and constant expansion. In turn, this aesthetic gaze echoes in the formation of the poetic voice, objective and depersonalized, pausing over synesthetic and minuscule, almost microscopic details within these verbal spaces, a matter approached by Lockaby in his short—but illuminating—final note: for example, in the image of the perfume with lavender and “hojas de tomate y quilas de cincuenta años” [“tomato leaves and fifty-year-old quilas”].

Furthermore, the agency of matter comes into view through a careful use of characterization or personification, capable of establishing interdependent relations between its actors while directing its permanent transformation processes: “En la madrugada, la humedad se expande y el retorno de la luminosidad activa de distinta forma la permanencia de las plantas” [“In the dawn the humidity expands, and the return of luminosity activates in different form the permanence of plants”]. In both artifice and nature, public and private spaces, the garden is configured as the ideal territory for the reformulation of personification, no longer as a pathetic fallacy in service of the subject—consider Wordsworth and Coleridge, for example—but as an ecological gesture: the communication of matter with matter through its networks, patterns, and assemblages: “Poco a poco me fui alejando de ese movimiento cuando aparecieron y armaron su materialidad” [“Little by little I withdrew myself from that movement when they appeared and armed their materiality”].

In this perceptive and linguistic exercise, the speaker focuses on shape as a potential detention of matter. That is, the subject evocatively exposes the virtual sedimentation of the elements: “la solidez de las formas plantadas elabora los campos de luz” [“the solidity of planted shapes develops the fields of light”]. From there, the agency of matter is represented as work and alliance: a synthesis, in turn, of the metaphorical juxtaposition between space (“the fields”) and the senses (“of light”). This transposition functions not only figuratively and rhetorically, but also at the syntactic and structural level. Within the sequence, clauses are assembled without discursive connections through parataxis: “Only in the vault can light be seen passing by. The other illuminated area is underfoot.” In this sense, language acts as an immanent force and a material continuum with the ever-changing elements of the garden. Thus, words are interconnected with the landscape. This phenomenon is also present at the aesthetic and paratextual level on the front cover, skillfully and accurately designed by Mutandis. The three pages and vertical cutouts of abstract territories, resembling geological formations or microscopic images, embody the different assembled layers of the garden and the collection of poems. In other words, the transposition acts as a force field, capable of being irradiated in the diverse states and interstices of matter.

Indirectly, Cociña’s writings and the style of the collection respond to the rhetorical question posed, almost as an imperative, by the speaker themself: “What other gardens are possible?” This call, of ontological resonance but also metafictional, reinforces the different literary readjustments of the Chilean author with respect to the topic of the garden, the genre of the topographical poem, the reach of synesthesia, juxtaposition as assemblage, and the use of personification. Thus, this renovation, re-elaboration, or reconstruction is distinguished through the problem of scale, the view of language as a continuum, and the agency of matter. From there, the reprint by Cardboard House Press and the translation by Ian Lockaby are an invitation to travel through the verbal, immanent, and imaginary spaces of Carlos Cociña.