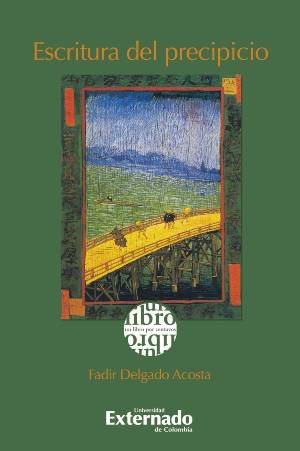 The poem—its dense revelation—begins in darkness. The sick body of the one who speaks from it is witness to the abyss where he falls while in the depths of the flesh a creature’s body throbs. Death keeps up with what happens in the operating room, what the doctors’ and nurses’ hands do. It keeps up with the hospital’s atmosphere where a poetics is constructed, that of existence, just as vulnerable as fear, like uncertainty, erased from consciousness once the anesthesia takes effect and the body turns into echoes, voices, words, silence: in a poem that unfolds in a book. Darkness is a subject in which literary devices are not necessary. Darkness itself, shadow, is a figure-image that, fueled by the thread of voice, emerges from someone writing from the depths, from a place where “reality” is lost and illness—the same disease of the spirit—has remained in skillful hands, dedicated to extracting other shadows from the shadow, from the dark interior of blood, tissues, the hermetic discourse of silence.

A woman, from the first verse, narrates part of her life from a hospital bed. Her thoughts reveal the aquatic nature of respiration. That amniotic interior—imagined or not—is the fish bowl where a child resides, one who must have been born in the poem and has remained like a scar, who is not just a body anymore but writing: the line where the void, the abyss, the brink of time, the instant in which the world disappears, fades away, and darkness begins to become a poem, a poem shared in various titles until it becomes a public experience: this book by Fadir Delgado Acosta, christened as Escritura del precipicio, published by the Universidad Externado de Colombia and the Decanatura Cultural (Bogotá, 2021), puts the reader on a cliff where they cease to be seen because vertigo arrives like a premonition and invades the curious reader to their core, the one who engages with these pages—every reader is admitted like an ailment—will not come out unscathed from the reading, from this suture whose scar will be permanent.

Like a test of the body, illness is nourished in memory. Once this is lost, the ailment disappears. It is no longer consciousness. The emphasis in the first poem informs the reader of the subject-vertigo: it has to do with birth (or abortion?), with wounded or scarred flesh, which combines the necessity of living with agony, with the almost imminent descent into the depths. The poem itself is a scar, the gaze that the patient directs toward the place where darkness, pain, and its fluttering are hidden. The voice talks about a line on the skin, about the wound from which a living body would have to emerge: the heralded child, who is (was?) a vital part of the beginning of the writing that heralds the abyss. Darkness is a character. And in order to pass over it, a bridge that is read as a subject both of and in the first person. Each verse is a step towards the announcement of a moan that reveals the sick person as toothless, with a mouth like a “dark desert,” from which anguish exits. The living mass, “Cuerpo”: Horca donde los vestidos cuelgan [“Body”: gallows where clothes hang] is the affirmation that being and existing is just an instant, that death is that very instant.

Is it a question then that the poem is the illness in the voice of the poem itself? Hospitals, giving birth, X-rays, the operating room, infant intensive care, abortion: words from medical terminology that rush to the aid of whoever traces the presence of a character on the brink of falling.

All poetry, or that which is considered as such, is metatextual. That is, it goes beyond itself, beyond what it wants to express, beyond what it is. These poems, which traverse the path of a life in writing, discover in Fadir Delgado Acosta’s voice the tension of an endangered existence. That’s why, from the perspective of metatextuality, this poetry encompasses what it wants to say beyond its content: it is the voice of a pathology. It is the voice of a body that is beyond itself. The body is the poem attacked by an ailment, by an accident, by a health emergency.

This highly personal anthology opens the path to address that great already-treated topic: it is a being or a clinical subject, underscored by syntax or a grammar of suffering, which turns to “her” personhood or turns him into a character.

The reader, implicit or not, feels that the subject of the poem spans the entire anthology: it is a single dense voice whose tone is always alert, as if a hypothesis were trying to reach it to drain it of reality.