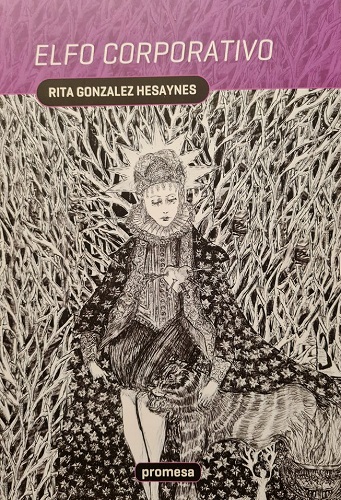 “A newborn is stolen from the crib / and replaced by a tiny elf. This / is how the story begins.” This is the fictional axis that connects the poems in Elfo Corporativo (2021). We find only one significant piece of biographical information about the author on the flap of this book, edited in Buenos Aires under the careful diligence of Promesa Editorial. Rita González Hesaynes was born in Azul, in the heart of the humid Pampas. Also worth noting is the gorgeous illustration on the cover, the work of Angelique Pierre that, with its dense linework and relevance, spotlights a central figure: an elf petting a beast. Her gaze is downcast and melancholic, surrounded by a complex lattice of branches in a dark forest.

From the first text, what will become the central node of the canto begins to unfold. The abandoned elf will have to devise the singularity of her own language, the fingerprint of her voice, her unique and unmistakable aroma, with the objective of discovering the articulation of a tongue without a mold, dispossessed at birth and thrown out into the elements among the other voices: “at birth / there was no mother tongue / every language was mine and I talked with the flowers and the rounded / stones1 / and the gnomes and the souls that cross mirrors / to go from world to world.”

Perhaps the primary or ultimate reason for poetry is to communicate, touch, trade, graze another with their vertigo or shadow. To reveal a sense? In this story, the elf grows up among humans and domesticates herself; she becomes cannon fodder for a dehumanized system of pulleys and distaffs, yet another little animal that will make the wheel turn ceaselessly in a kingdom of labor built around the great models of production and consumption, of “prices, notifications, records, receipts, and logistics.” There, in that life circumstance, occurs the forging of the voice and the rebellion, maybe only possible through an adroitness with language, in this strange tongue of poets, so singular, so strange among the strange, that through its anomaly it may disappropriate and lay bare the bastardization of all other languages.

In the alchemical time of the forest, language was rounded stone; the tongue was all the tongues of the golden age of myth. In the corporate world, the elf hangs from the vegetable thread that connects her to sleep. With no true mother tongue, disparaged of the kinship of those who speak no language, without family, without relations, the elf rebels and reveals to us an originative tongue that subverts the tongue of the enemy.

In this poetry collection, each text confronts the different discourses of human transactions within power structures, the bullrings of production and their relentless workdays. The endeavor is to expose the border between the lyric and the anti-lyric, to let the idea of the poetic sublime stagger forth. Here the word stakes its terrifying exactitude on other battles. Rita González Hesaynes writes a poem “Against poetry,” in parallel to that famous invective uttered by Witold Gombrowicz in Buenos Aires in 1949, a strange and foreign poet, watching and writing from the margin of the dominant literary groups.

The poetic voice becomes a fractal voice, a gathering voice, a univocal voice that through its orphanhood depicts the scam of aseptic corporate language, with its mechanical efficiency, a closed code agreed upon by the participants of the daily stand-up, that stamps out any possible trace of sensitivity or vulnerability. It also exposes the artifice of advertising language, the linguistic usage and turns of phrase of social media, or the technological and programming terminology.

This poetry collection by González Hesaynes once again takes up that feeling expressed by Carlos Drummond de Andrade (in his “Elegy 1938”), whose modernist approach advocated for the use of clear and pristine language, which extricated it from the superfluous words of earlier Brazilian poetry, to give voice to the senselessness of alienating and dehumanized work.

Certainly the powerful corporate monster has mutated in its forms of exploitation and subjugation, but its ends and objectives remain intact. Here we see the development of a mosaic of languages that amalgamate into a scream that forces its way into the space designed for a utilitarian, hegemonic, and efficient language in the cold, glass-walled cubicles without greater distractors. It is the work of the poet to be rounded stone, uproar, raging voice, that jagged rock that hits windows.

1 Translator’s note: This is an important recurring theme used by both the author and the reviewer. The original Spanish text says “cantos rodados,” or the smooth river stones commonly used for landscaping, but in this context there is a double meaning, since “canto” is the name of this type of poetry and “rodado” can mean well-worn or well-traveled.