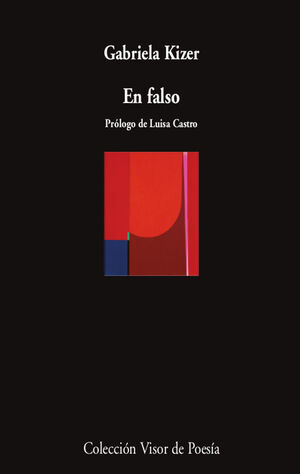 In the enlightening preliminary note that opens En falso, Venezuelan writer Gabriela Kizer states that the perception of time can come to us as an agonizing revelation until it becomes awareness. The questions that silently follow permeate the five parts of this book of poems, sweeping and breathing life into the surface: How are bonds given shape? How are relationships to one’s country formed? How do we make sense of being in this life and with the other? Ultimately, what lingers is a stubborn doubt surrounding how to wield, what to call, and what capacity words have to capture life.

The magnificent first section activates memory like a living reservoir from which to draw scenes or tokens that move about making signs, and that clearly show the weight of the past. In the first poem, before the face of Charon, a cart is rescued where a red velvet dress was once worn, and the last line questions whether the coin clutched in hand will be enough for today’s passage. In the background we can glean the verses’ underlying question: Will words be enough for what has happened, for the loss, for so much disaster, as we later will see?

We also come across very powerful, voice-shaping scenes: a dark room where a skeleton, frozen in laughter, awaits a child’s confession; a butcher chopping up a giant femur; a cat with its guts spilled open; and so many more that make up an exacerbated and intensifying gaze. In this first part, the past weighs heavily with its diminution, but there is also a voice cemented in remembrance that asks and preserves, acting as a counterweight to loss. For example, in “Tres sueños,” the phrase “pero yo quiero” [“but I want”] is reiterated, with a subject that demands a great deal and brings back what has vanished: “el agua que se disuelve y aglutina,” “la poción de cebada a medio moler” [“the water that dissolves and binds itself together,” “the half-ground barley potion”]. This first part of En falso traces ancestry through a mother’s gray cashmere coat, the blind eyes of a father who mixes up numbers, a conversation with a dead grandmother who is asked in vain: “¿quién nos da un rostro? / ¿quién desgarra nuestra triza de origen?”  [“who gives us a face / who rips our origin to shreds?”].  From the ancestors’ journey to the New World, words bear witness to origin, constantly crying out and questioning.

In part two, as Luisa Castro states in her prologue, the poems become more narrative, in keeping with a deeper exploration of the ordinary. Images of the past still emerge, but the verses clearly turn towards more recent experiences that seek to map dislike or disenchantment. In spite of these more everyday moorings, the verses pick up the vein of the literary tradition of mythology, fables, and stories, while incorporating verses in italics from other authors, many of them included in an endnote (Homer, Kafka, Andersen, Sánchez Peláez, Vallejo, and Rulfo, to name just a few). A sense of collectivity is laid down from the voices poured into the poetic voice’s central stream (recall her impressive Tribu). At this junction, the permanence of identity is also at stake: “Y cómo somos y no somos los mismos” [“And how we are and are not the same”]. The meditation on the verbal instrument is not left behind, and in a poem like “Ríos” there are allusions to the “lenguaje cenagoso” [“muddy language”] that progresses with the changing landscape of life and its fluvial course.

En falso also offers a set of prose poems where dialogue is open to different textures and appearances: from Lancôme makeup or Sappho, through Saint Augustine, Lispector, and Apollinaire, ending (again, without mentioning everyone) with Farruquito, Callas, and Marilyn Monroe. This third part is enriched by the presence of some metapoetic texts that give an account of the dynamics of writing: “A veces quisiera vaciar el poema / Que respire sin memoria ni partículas de lodo / en el fondo de la copa” [“Sometimes I would like to empty the poem / Let it breathe without memory or mud particles / at the bottom of the glass”]. Even Poe wanders through the text called “Filosofía de la composición.” The palimpsest, the coexistence of tradition and the contemporary, continues to be transparent in a sometimes-ironic dialogue that intermingles flashes of import with a certain deliberate superficiality (“Yo también detesto los temas femeninos, pero se trata de la base que prefiero y del rímel que no me produce alergia” [“I also detest feminine matters, but it is a matter of the foundation I prefer and the mascara that does not give me allergies”]).

The penultimate part of the book is one of the highlights of the collection, with two long prose poems like two great, breathless lungs: “Crónica, 2014” and “Tierra de gracia.” In the first, Venezuela is ripped to shreds in each paragraph, in that dead end that is repetition with slight variations on the date (“Fue a finales de febrero de 2014” [“It was at the end of February 2014”]). The presence of the army, the bullets in the street, and the shortage of supplies surround an inserted self among so many other terrified citizens: “Y mi nombre solo servía para representar a una mujer de clase media que vivía en una urbanización del sureste de Caracas” [“And my name only served to represent a middle-class woman living in a housing development in southeast Caracas”]. In the second text we see the disjointed coexistence of literary evocation, urban robberies, ghosts in search of food, the heat of those days, and the inevitable thanks given to God for being alive. The rest of this part is filled with characters left behind in a landscape destroyed by poverty and abandonment (in italics, sounding Vallejo’s verse: “no nos vayan a haber dejado solos” [“surely they haven’t left us all alone”]). Loss also shudders through here, in the crumbling of a country, in the realization of what no longer exists. In the beginning, Kizer details her chronicling practice with words taken from José Balza: “crónico como dolencia: la palabra que sufre” [“chronic as an ailment: the word that suffers”]. The pain is named outright, the open wound is touched.

Part V bears the book’s title. The last texts of En falso pick up images from other parts, and after looking back at the past, at the everyday, at literature, at the country, the voice asks: “Y ahora qué ofrecerte, palabra, / qué desear de ti” [“And now what to offer you, words, / what do I want from you?] The die is cast and we do what we can: “Aquí, entre dientes, mascullamos / el mundo que no es” [“Here, between our teeth, we mutter / the world that is not”]. The destitute city returns and precariousness settles into the gaze, which is filled with holes. When the voice no longer seems to understand familiar language and questions about the past come to the present, it feels like the book is becoming unbound in the hands of the reader. Through a mosaic of voices that construct a multifaceted reality, increasingly pressing questions pour out of the book of poems: “¿Y Caracas, qué sabes de Caracas? […] ¿En qué país estamos, Agripina?”  [“And Caracas, what do you know of Caracas? […] What country are we in, Agrippina?”]. However, the naming voice survives, once again coming to the rescue. Everything is lost before one’s eyes, one’s own face falls apart in time, and the last poem details what is already gone, as well as what will be gone: days, children, friends, parents.

But there are more of us, there are more voices that support and save: “No llores, no llores […] Y vas a levantarte, vas a levantarte cantando”. [“Don’t cry, don’t cry. […] And you’re going to get up, you’re going to get up singing.”] Here’s the answer to the question at the beginning: How? By tearing the song. A song in tatters, but a song all the same.